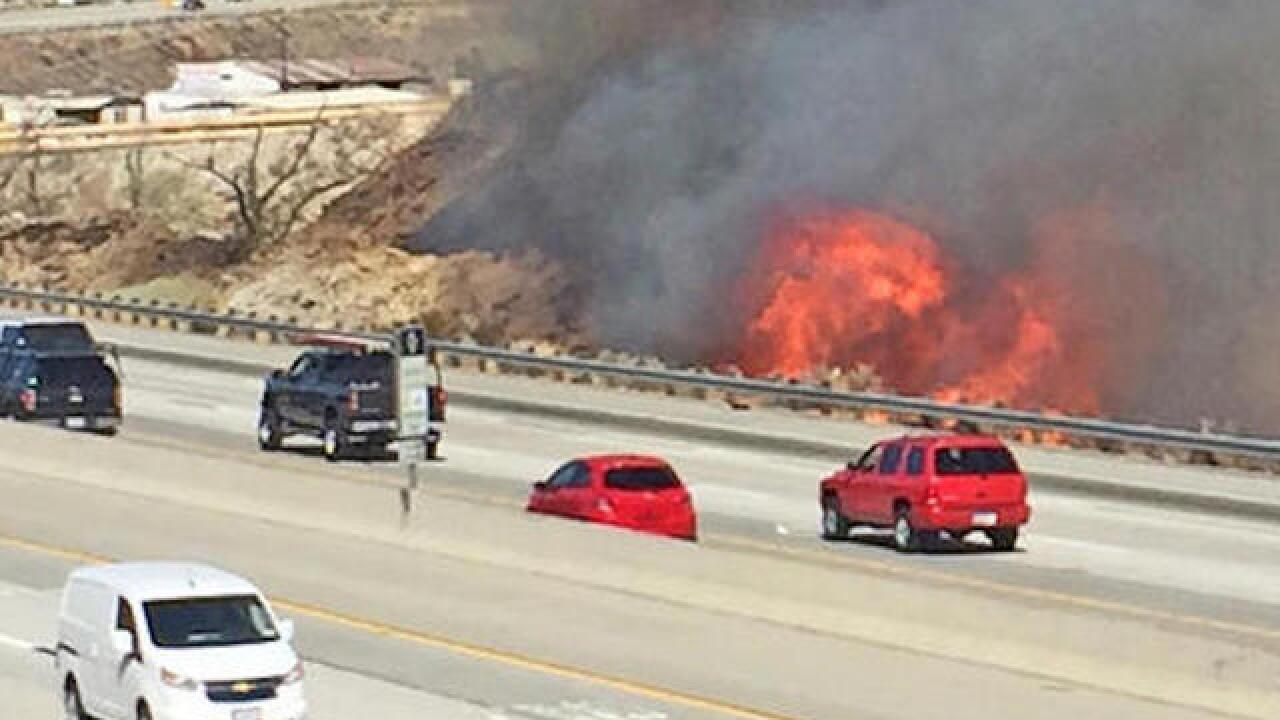 Copyright Associated Press
Katharine Lotze
<p>Commuters drive near the northbound Highway 14 during the Sand Fire in Santa Clarita on Friday Friday, July 22, 2016. A wildfire north of Los Angeles has now burned about 2.3 square miles of bone-dry hillside. The fire erupted shortly after 2 p.m. Friday next to State Route 14 in Santa Clarita. The freeway is partially closed along with a section of Metrolink train track. About 200 firefighters and a half-dozen aircraft are battling the flames in 106-degree heat. (Katharine Lotze/The Santa Clarita Valley Signal via AP)</p>

LOS ANGELES (AP) — Wildfires burned out of control Saturday in mountains north of Los Angeles and near Big Sur on California's scenic Central Coast, posing a threat to 2,000 homes and a sanctuary for exotic animals which was being evacuated, authorities said.

Southern California firefighters toiled in another day of triple-digit heat from a dome of high pressure over the region, and while Central Coast temperatures were more moderate, conditions included winds and low humidity.

The fire in northern Los Angeles County grew to more than 17 square miles, spreading smoke across the city and suburbs, reducing the sun to an orange disk at times. Containment was estimated at just 10 percent.

The South Coast Air Quality Management District warned that at times air would reach unhealthy levels. Suburban Pasadena and Glendale closed their municipal pools due to smoke and falling ash.

The fire erupted Friday afternoon in the Sand Canyon area of suburban Santa Clarita near State Route 14 as the region was gripped by high heat and very low humidity. Winds pushed it into the adjacent Angeles National Forest.

The fire was a threat to 1,000 homes by Saturday afternoon and those communities were advised to pay attention to news, said Los Angeles County Deputy Fire Chief John Tripp.

"But if we were to get very extreme fire behavior we're up to 45,000 homes ... mainly down in the San Fernando Valley," Tripp said.

Neighborhoods within the city of Los Angeles lie along the so-called urban-wildland interface at the northeast edge of the valley. Tripp said the Los Angeles fire chief was ready to join the incident command and 15 strike teams were put on alert in case flames made a push in that direction.

Some 400 animals were being evacuated from the Wildlife Waystation, a nonprofit sanctuary for rescued exotic creatures within the national forest.

The sanctuary's Facebook page appealed for donations of flatbed and enclosed trucks as well as an air-conditioned warehouse to house the animals.

Over many years, the sanctuary has cared for thousands of animals ranging from lions and tigers to primates and exotic birds.

More than 220 horses, dozens of goats and other animals were taken from the fire area, animal control officials said.

Metrolink train service in the area was halted Friday and on Saturday was subject to delays.

About 300 miles up the coast, California Department of Forestry and Fire Protection firefighters battled a nearly 3-square-mile blaze in rugged mountains north of the majestic Big Sur region.

The blaze 5 miles south of Garrapata State Park posed a threat to 1,000 homes and the community of Palo Colorado was ordered evacuated, Cal Fire said. A middle school in Carmel-by-the-Sea was readied as an evacuation center.

"We felt threatened this morning and decided we needed to go," Masten-Hansen told KSBW-TV (http://bit.ly/2a67k7i).

Her sister also left her home down the road.

"I grabbed all the pictures of the kids and then I took the paintings of my parents that had been done by a local artist," Ellen Masten said.

More than 300 firefighters were on the lines.