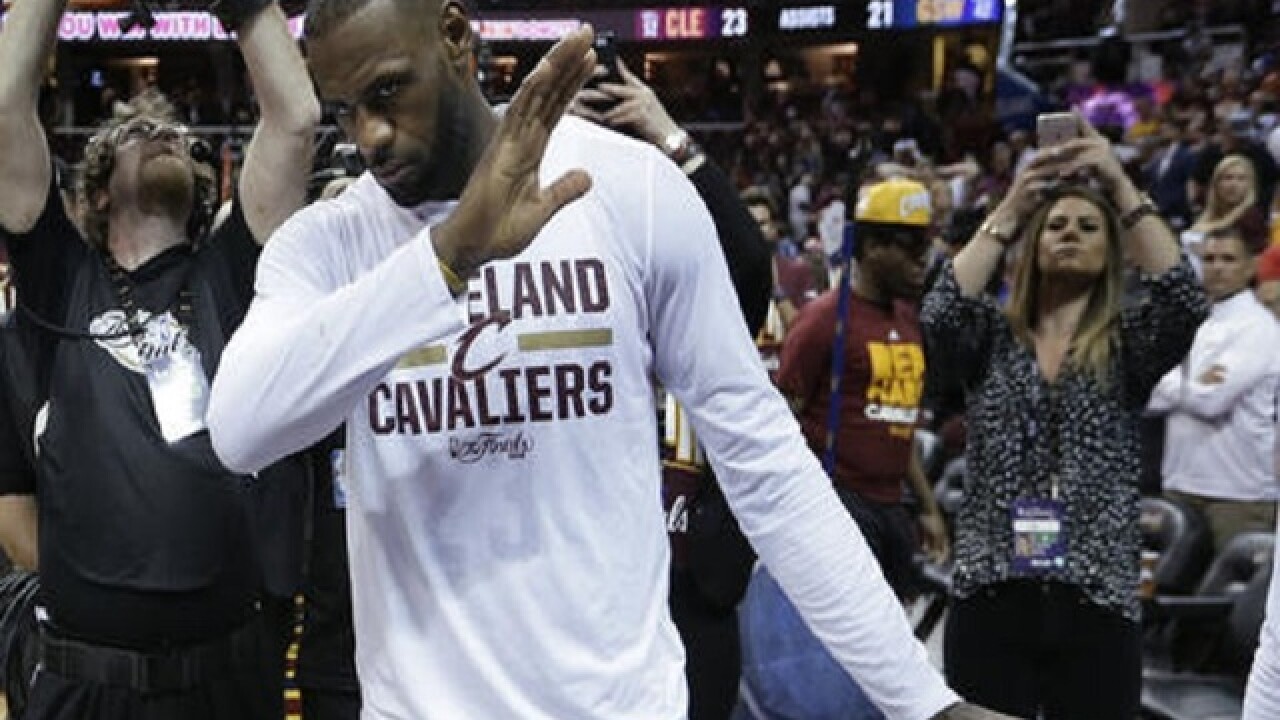 By: Associated Press
Posted at 10:34 PM, Jun 08, 2016
CLEVELAND (AP) — Crawling on the floor after a loose ball, LeBron James gathered himself and quickly got to his feet.
He stood tall, and so did the Cavaliers.
James had 32 points and 11 rebounds, Kyrie Irving added 30 points and Cleveland, pushed for 48 minutes by a delirious, championship-starved crowd, hammered the Golden State Warriors 120-90 in Game 3 on Wednesday night to pull within 2-1 in the NBA Finals.
NBA Finals - Game 3 Advanced Boxscore Recap | PointAfter
On their home floor, where they have been dominant all postseason, the Cavs recovered from a 33-point loss in Game 2 and yanked their season from the brink of disaster following back-to-back blowouts in the Bay Area.
"We finally got back to our game," said James, whose energy from the start electrified 20,000 fans, and most importantly his teammates. "It was a good flow, a collective team win."
They Cavs did it without starting forward Kevin Love, with little help from their bench and by keeping Stephen Curry penned in.
The league's MVP was mostly MIA, scoring 19 points — two in the first half — on 6-of-13 shooting. Harrison Barnes scored 18 and Klay Thompson 10 for the Warriors, who had won seven straight over Cleveland — the first two finals games by a combined 48 points — and came back to the birthplace of rock and roll looking to party like they did after winning the title in Quicken Loans Arena last year.
The Cavs, though, have made this a series after it appeared the Warriors were on the fast track to another crown.
James had called it "do or die" for Cleveland.
Done and living.
The Warriors didn't look anything like the team that won a record 73 games during the regular season or the one that overcame a 3-1 deficit in the Western Conference finals.
"We were soft," said coach Steve Kerr. "When you're soft, you get beat on the glass and turn the ball over."
Curry didn't offer any excuses, but the two-time MVP hasn't been himself so far in this series.
"I've got to play 100 times better than that," he said, dismissing any notion he's slowed by injuries. "I'm fine. Not the way we wanted the night to go."
Irving bounced back from two rough games out West, J.R. Smith made five 3-pointers and Tristan Thompson did the dirty work inside, getting 13 rebounds for the Cavs, who improved to 8-0 at home and can even the series with a win in Game 4 on Friday night.
The Cavs hardly missed Love, still suffering from a concussion sustained in Game 2. He wanted to play, but is still in the NBA's concussion protocol and has not yet been cleared to return by league and team doctors.
Coach Tyronn Lue started veteran Richard Jefferson and moved James into Love's power forward spot, giving the Cavs a smaller lineup better equipped to run with the Warriors.
The 35-year-old Jefferson gave the Cavs a huge boost in 33 minutes, scoring nine points with eight rebounds.
Leading by eight at half, Cleveland took control in the third quarter when James and Irving combined on a play that symbolized the Cavs' resurrection.
Scrambling on his hands and knees while for a ball near midcourt, James got to his feet and whipped a pass to Irving on the left side. Irving returned a lob to James, who leaped high and flushed it with his right hand, a basket that seemed to erase all that went wrong for the Cavs in California.
"I wanted to see something great," Irving said of high pass, which forced James to soar. "It was awesome."
Said James, "I had to go get it."
The Cavs had to get Game 3, and James gathered his teammates in the hallway with some instructions.
"Follow my lead from the beginning!" he screamed. "And do your job!"
The Cavs listened, scoring the game's first nine points and opening a 20-point lead in the first quarter, rattling the Warriors.
"They just punched us right in the mouth," Kerr said.
BLOWOUT CITY
The Warriors won the opener 15, Game 2 by 33 and then lost by 30. What gives?
"It's the NBA," Kerr said. "This is how it is. As Gregg Popovich used to tell me, the other guys make millions of dollars to play too."
PICKED OFF
Klay Thompson left briefly in the first quarter with a thigh bruise after he crashed into Cleveland's Timofey Mozgov trying to set a screen.
"It seemed kind of dirty to me," Thompson said. "He stuck his knee out, too."
SIT DOWN
Curry was beaten on two back cuts early in the game and was benched by Kerr.
"I would have done the same thing," Curry said. "He's trying to figure out a way to get me going."
TIP-INS
Warriors: Are 0-4 in Game 3s in these playoffs. Golden State is 2-6 in Game 3s over the past two seasons and 28-5 in all other games. ... Kerr became emotional before the game when paying his respects to Sean Rooks, his former Arizona teammate who died Tuesday at the age of 46.
Cavaliers: Have won their eight home games in these playoffs by an average 22 points. ... Cleveland is 13-0 when scoring 100 points in this postseason. ... James has 82 career 30-point games in the playoffs, third most all-time. Only Michael Jordan (109) and Kobe Bryant (88) have more. ... Lue said he doesn't pay any attention to the all the outside second-guessing about his lineups. "I don't care," he said. "They (critics) should be coaches."
Copyright 2016 The Associated Press. All rights reserved. This material may not be published, broadcast, rewritten or redistributed.