(Copyright 2022 The Associated Press. All rights reserved. This material may not be published, broadcast, rewritten or redistributed.)
AP Photo/Christian Torres, File
FILE - In this Feb. 19, 2019, file photo, migrants who are awaiting their chance to request asylum in the U.S. pass the time inside a shelter in Bachilleres gymnasium in Ciudad Juarez, Mexico. The Trump administration&#39;s effort to make asylum seekers wait in Mexico explicitly targets Spanish-speakers and people from Latin America, according to internal guidelines of a highly touted strategy to address the burgeoning number of Central Americans arriving at U.S. borders. (AP Photo/Christian Torres, File)

SAN DIEGO — Border agents have been told to explicitly target Spanish speakers and migrants from Latin America in carrying out a Trump administration program requiring asylum seekers wait in Mexico, according to memos obtained by The Associated Press that reveal some inner workings of a top government priority to address the burgeoning number of Central Americans arriving in the country.

The Trump administration launched the program in late January in what marks a potentially seismic shift on how the U.S. handles the cases of immigrants seeking asylum and fleeing persecution in their homeland.

The program initially applied only to those who turned themselves in at official border crossings. But a memo from a division chief of the Border Patrol’s San Diego sector says it expanded Friday to include people who cross the border illegally.

The guidance includes instruction about various groups of immigrants who are not to be sent back to Mexico and instead go through the traditional asylum process in the U.S. immigration court system. They include pregnant women, LGBT migrants and people suffering medical issues. Authorities said previously that Mexican asylum seekers are excluded, as are children traveling alone. 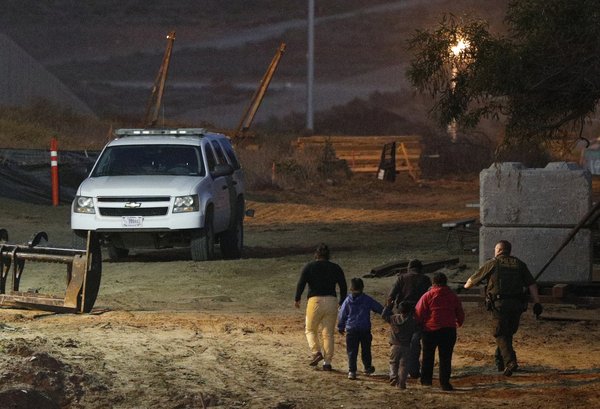 Migrants are escorted by a U.S. Border Patrol agent as they are detained after climbing over the border wall from Playas de Tijuana, Mexico, to San Ysidro, California, on Dec. 3, 2018.

U.S. officials must check if the asylum seeker has any felony convictions and notify Mexico at least 12 hours before they are returned. Those who cross illegally must have come as single adults, though the administration is in talks with the Mexican government to include families.

The program is being implemented as border arrests soared in February to a 12-year-high and more than half of those stopped arrived as families, many of them asylum seekers who generally turn themselves in instead of trying to elude capture. Guatemala and Honduras have replaced Mexico as the top countries, a remarkable shift from only a few years ago.

The instructions say Mexican officials insist that no more than 20 asylum seekers are returned each day from San Diego to Tijuana, Mexico, on Monday through Saturday, underscoring challenges that the U.S. faces in trying to quickly ramp up one of its top border enforcement priorities and most significant changes to the U.S. immigration system of Donald Trump’s presidency. Authorities said Tuesday that more than 76,000 were stopped or apprehended at the Mexican border in February, more than double the same period last year.

A memo on Tuesday to top Border Patrol officials in San Diego said the agency is under “pressures to utilize this program as much as we can.”

Asylum-seeking families are typically released from U.S. custody immediately and allowed to settle with family or friends while their cases wind through immigration courts, which often takes years. Critics say that amounts to “catch-and-release,” which administration officials want to limit with the new Mexico program.

In a statement, the Department of Homeland Security described the program as “another tool available in the law” to respond to the record numbers of Central American migrants arriving at the border in recent months. The agency said the program is being carried out in a “thoughtful and deliberate manner” that protects vulnerable migrants and is done in collaboration with the Mexican government.

Two U.S. officials who were not authorized to discuss the internal guidance and spoke on condition of anonymity confirmed contents of the memos obtained by the AP.

Explicitly targeting Spanish speakers and Latin Americans had not been previously disclosed, though some critics said it was no surprise considering that recent arrest numbers are largely Central Americans.

Judy Rabinovitz, an attorney for the American Civil Liberties Union, said the criteria “does smack of the same concerns we had in the Muslim ban,” referring to Trump’s ban on travelers from several predominantly Muslim countries, which was eventually upheld by the Supreme Court.

“We know they are trying to get at Central American asylum seekers but to see it written there so blatantly is so disturbing,” said Rabinovitz, whose organization was among those that sued the administration last month to block the policy. 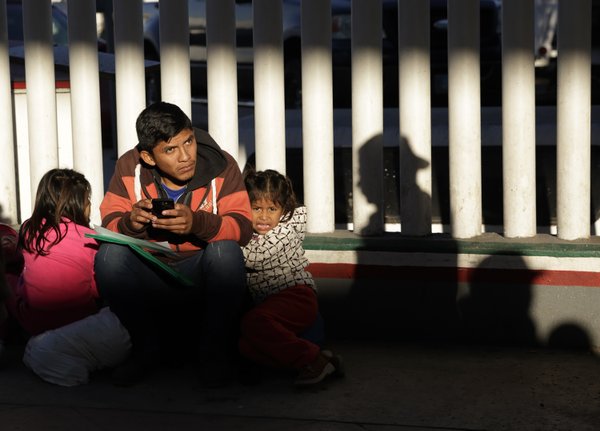 A migrant who did not give his name sits with his children as they wait to hear if their number is called to apply for asylum within the United States, at the border in Tijuana, Mexico, on Jan. 25, 2019. AP File Photo by Gregory Bull.

Secretary Kirstjen Nielsen has made the administration’s “Migrant Protection Protocols” a top priority, working for months with Mexican counterparts to seal the broad outlines of an agreement in November.

Testifying Wednesday in Congress, Nielsen said the U.S., working with Mexico, was exercising its authority to make people wait outside the country.

“All asylum seekers have the opportunity to present their case,” she said. “We’re not turning anybody around.”

The effort has gotten off to a modest start amid mixed signals from Mexican officials and been limited to San Diego. Tonatiuh Guillen, who heads Mexico’s immigration agency, told the AP that Mexico accepted 112 Central Americans during the first five weeks, including 25 children. Homeland Security has declined to release numbers.

A Homeland Security official, speaking to reporters Friday on a conference call on condition of anonymity, said the administration planned to grow the effort exponentially across the border, including to people who cross illegally between border crossings. The official declined to say when or where but said it was likely to be expanded in the next few weeks.

One memo obtained by the AP shows that it had been expanded on the same day.

(Copyright 2022 The Associated Press. All rights reserved. This material may not be published, broadcast, rewritten or redistributed.)