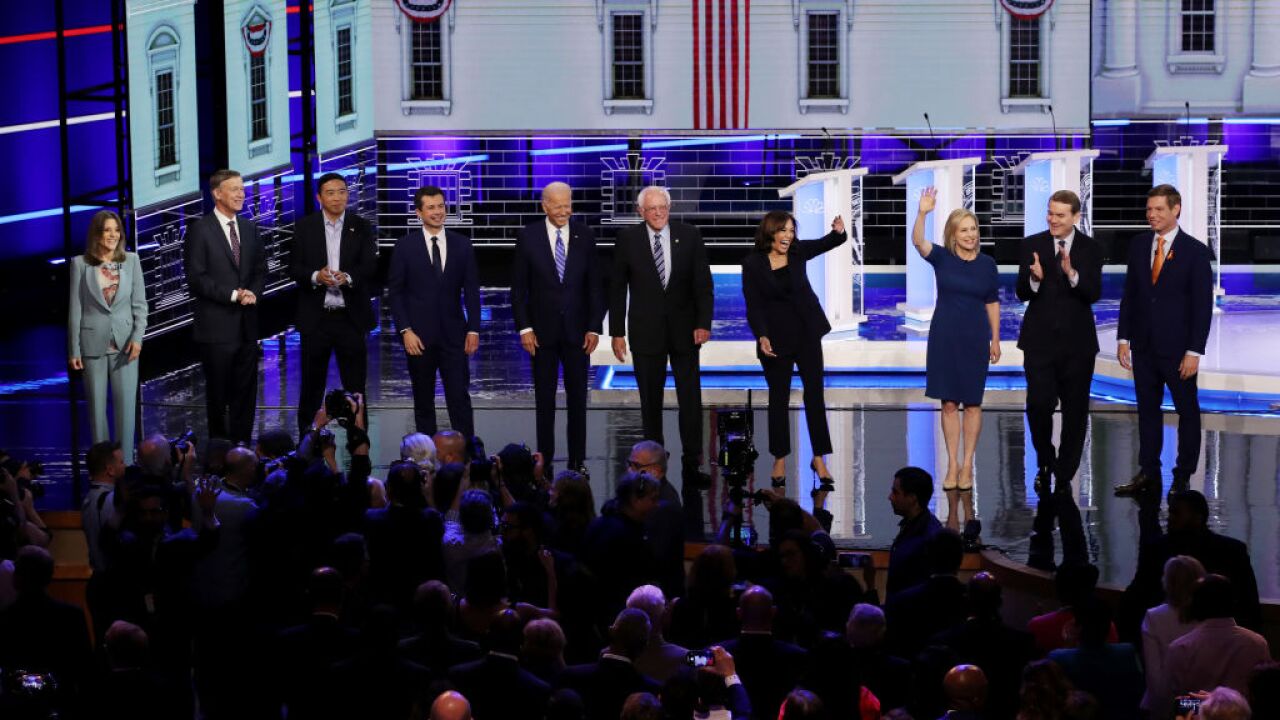 The second night of the first 2020 Democratic presidential debate continues with 10 candidates , including three of the top polling leaders in former Vice President Joe Biden, Sen. Bernie Sanders of Vermont and Sen. Kamala Harris of California.

The candidates are tackling health care, immigration, race issues, taxes and the economy.

Here are the facts .

Facts First: When it comes to taxes, the picture is more complicated than Yang claims. Amazon pays state taxes and has also paid federal taxes in the past.

The Wall Street Journal reported recently that Amazon's overall tax rate from 2012 through 2018 was 8%.

"From 2012 through 2018, Amazon reported $25.4 billion in pretax US income and current federal tax provisions totaling $1.9 billion," the Journal reported. "That is an 8% tax rate — low, but not zero or negative. Looking back further, since 2002, Amazon has earned $27.7 billion in global pretax profits and paid $3.6 billion in global cash income taxes, a 13% tax rate."

Amazon's SEC filings in 2017 showed it did not expect to owe any federal tax, and in fact expected to get a $137 million refund from the federal government. It did, however, say it expected to pay $211 million to states.

More recently, in February, an analysis of Amazon corporate filings by the Institute on Taxation and Economic Policy found that the company got a rebate of $129 million for tax year 2018.

Analysts say Amazon was able to whittle down its tax liability by taking advantage of tax credits and deductions.

Facts First: This is incorrect. For the 2018 tax year, the top 1% was estimated to have received 20.5% of the benefits from the tax cuts, according to the non-partisan Tax Policy Center.

Some estimates say that if certain tax cuts are not reapproved by Congress after they sunset in 2027, 83% of the benefits would go to the top 1%.

President Donald Trump's tax reform law passed in December 2017 included tax cuts for corporations as well as individuals -- but while the benefits for business were permanent, the individual taxpayer cuts will expire by 2027. If Congress does nothing to extend them, the top 1% will at that point receive roughly 83% of the tax cut benefits, according to the Tax Policy Center .

California Sen. Kamala Harris claimed that the tax bill signed by President Donald Trump benefits major corporations and will contribute at least $1 trillion to the US debt.

Facts First: This is true. The Congressional Budget Office estimated that the 2017 tax act would add some $1.9 trillion to the federal deficit over the next decade.

CNN has previously reported that the Republican tax reform bill passed in 2017 included tax cuts for corporations as well as individuals -- but while the benefits for business were permanent, the individual taxpayer cuts will expire by 2027. If Congress does nothing to extend them, the top 1% will at that point receive roughly 83% of the tax cut benefits, according to estimates from the nonpartisan Tax Policy Center.

Last year, the Congressional Budget Office projected that the Republican tax bill would add $1.9 trillion over the course of 10 years.

Sen. Bernie Sanders blasted the rich for taking advantage of America, saying that three people own more wealth than the bottom half of the nation.

Facts First: It's true that the three richest Americans have more wealth than the bottom half of the nation, according to a 2017 study by the left-leaning Institute for Policy Studies.

Bill Gates, Jeff Bezos, and Warren Buffett had more combined wealth ($248.5 billion) than the 160 million people on the lower rungs of the wealth ladder, according to the study .

The institute used data from the 2017 Forbes 400 list and the Federal Reserve's 2016 Survey of Consumer Finances.

In calling for change, Bernie Sanders said, "500,000 people are sleeping out on the streets today."

Facts First: Sanders is basically correct here. While the number of people experiencing homelessness fluctuates in the United States, the most recent government tally lines up with Sanders' claim.

According to the federally mandated Point in Time Count conducted every year by HUD to count the nation's homeless population, there were 552,830 people experiencing homelessness on a single night in December 2018.