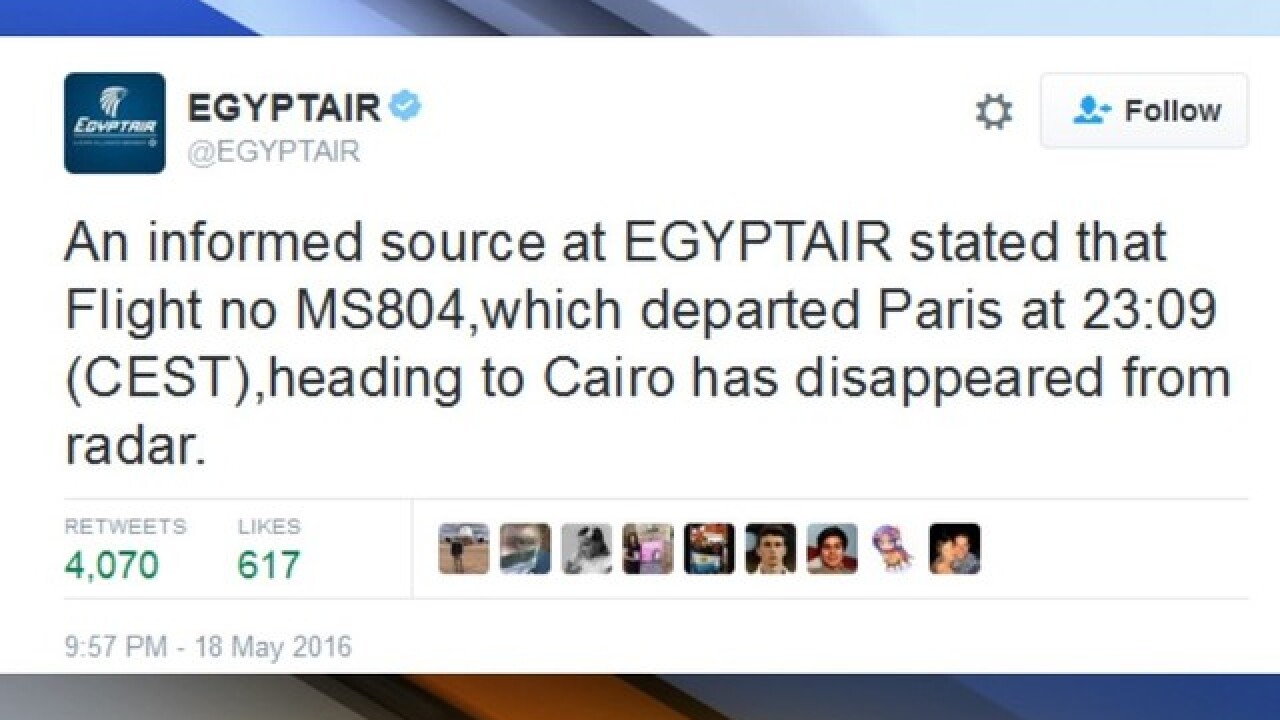 French President on #EgyptAir: "Information confirms, alas, that this plane has crashed"https://t.co/GhpGsEfiLL https://t.co/8JJBRABSxR

Officials said a search operation was underway off Egypt's Mediterranean coast to locate the debris, The Associated Press reports. The plane is believed to have crashed in the Mediterranean Sea off the Greek island of Crete.
Egyptian military aircraft and navy ships were reportedly taking part in the search operation, while Greece also joined with two aircraft.
A tweet from the airline confirmed the plane's disappearance.

An informed source at EGYPTAIR stated that Flight no MS804,which departed Paris at 23:09 (CEST),heading to Cairo has disappeared from radar.

"An informed source at Egyptair stated that Flight no MS804, which departed Paris at 23:09 (CEST), heading to Cairo has disappeared from radar," the tweet read.
The AP reports that Egyptian Prime Minister Sherif Ismail said it was too early to say whether a technical problem or a terror attack caused the plane to crash, telling reporters in Cairo, "We cannot rule anything out.”
According to USA Today, there were 56 passengers and 10 crew members aboard the plane, which was lost from radar around 2:45 a.m. local time -- just minutes before its scheduled arrival in Cairo. Early reports said 69 total passengers were on board, but the number was later updated to 66.
A tweet by the airline notes that the passengers included one child and two infants.

including 1 child and 2 infants in addition to 3 EGYPTAIR security personnel and 7 cabin crew with a total of 66 persons on board.

See below for a list of the 56 passengers' nationalities.

#EgyptAir has published a list of passengers on board missing flight #MS804, by nationality https://t.co/a9tI4C3kfQ pic.twitter.com/XpujHtwZeo

Families of passengers have begun gathering at Cairo International Airport. USA Today notes that several distressed family members collapsed at the airport, where the airline was providing doctors, translators and other services.
The plane was reportedly near 37,000 feet when it disappeared. The airline said it vanished just after entering Egyptian airspace.
CNN reports that weather conditions were clear and calm when the plane crossed over the Mediterranean.
According to Egypt's state-run newspaper Al-Ahram, an airport official as says the pilot did not send a distress call, adding that the last contact with the plane was 10 minutes before it disappeared from radar. The pilot reported no problems at that time.
An EgyptAir plane was hijacked and diverted to Cyprus in March, when man on board claimed to be wearing a suicide belt. The hijacker surrendered at Larnaca International Airport in Cyprus and all passengers were released safely.
Scripps Only Content 2016