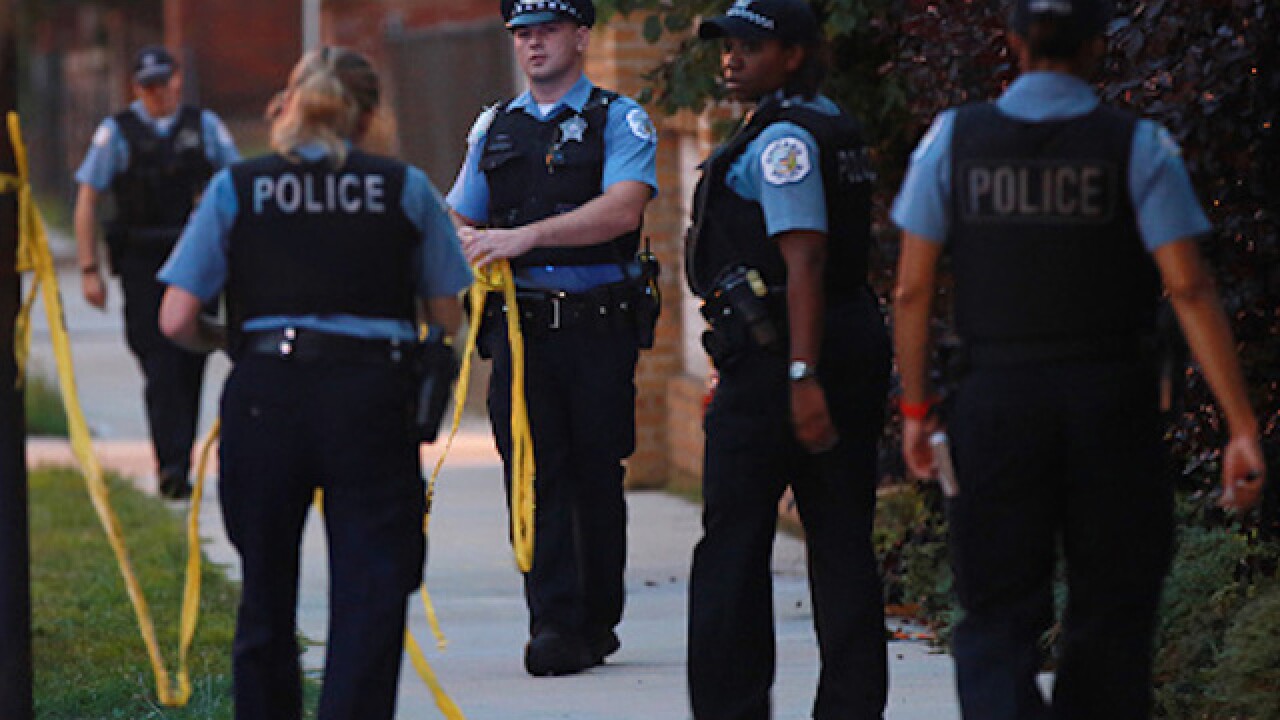 Copyright Getty Images
Chicago Tribune
<p>Police officers reuse crime scene tape at the corner of 73rd Street and South Merrill Avenue Thursday, July 28, 2016, in Chicago. A foot chase by police resulted in one offender shot and at least one officer injured, but not shot, during the incident. (John J. Kim/Chicago Tribune/TNS via Getty Images)</p>

CHICAGO (AP) — Chicago Police have "quite a few questions" after officers fatally shot a man driving a stolen car, and investigators have retrieved body cameras and cameras on squad car dashboards to determine whether officers followed the department's deadly force policy when they opened fire on the fleeing vehicle.

"At this moment the department has, unfortunately, more questions than we do answers," department spokesman Anthony Guglielmi said Friday.

Chicago police say that officers stopped the stolen Jaguar convertible Thursday evening in the city's South Shore neighborhood and were exiting their own vehicle when the driver sped away, sideswiping a squad car and a parked vehicle in the process.

The department said that two officers fired their weapons and that the man who was shot died at a hospital. The release said some officers were injured, but that their injuries were not considered life-threatening.

The handling of officer-involved shootings has come under intense scrutiny since the release last November of a video that shows a white officer fatally shooting black teenager Laquan McDonald 16 times. That shooting, and the initial statements by a union spokesman about McDonald lunging at police that turned out to contradict what was on the video, raised serious questions about what the public was being told about police shootings.

In contrast, beginning Thursday night, officials made a point of explaining all they were doing to investigate the South Shore shooting. Not only was First Deputy Superintendent John Escalante on the scene speaking to the media, but investigators from the Independent Police Review Authority, which investigates police misconduct cases and officer-involved shootings, arrived and obtained footage from cameras that the officers were wearing or were mounted on their squad cars. IPRA spokeswoman Mia Sissac said the footage would be posted online within 60 days, per city policy.

Among the questions investigators will try to answer is what led the man in the Jaguar to Chicago and whether he was involved with the theft of the vehicle earlier in the day in the suburb of Bolingbrook. Another question is what, exactly, led them to open fire. One thing they do know: When the incident was over, police did not find a gun, either on the street or inside the stolen vehicle, Guglielmi said Friday.

Now an issue that the department and IPRA must address is whether officers followed department policy by shooting at the vehicle. In February 2015, former Superintendent Garry McCarthy revised the department's policy on the use of deadly force to prohibit officers from "firing at or into a moving vehicle when the vehicle is the only force used against the sworn member or another person."

But while no gun was found, the policy also says that officers "will not unreasonably endanger themselves or another person to conform to the restrictions of this directive," meaning they had the right to defend themselves if they or someone else were in imminent danger of being struck by the car.

On Friday, Guglielmi said that although IPRA is handling the investigation of the officers involved in the shooting, "We are also looking at what policies may have been violated" and use the findings for training of officers.

Under department policy, the officers were placed on 30 days' administrative duty.

The Cook County Medical Examiner's office said Friday it could not release the name of the man who was killed because his next of kin had not yet been notified.