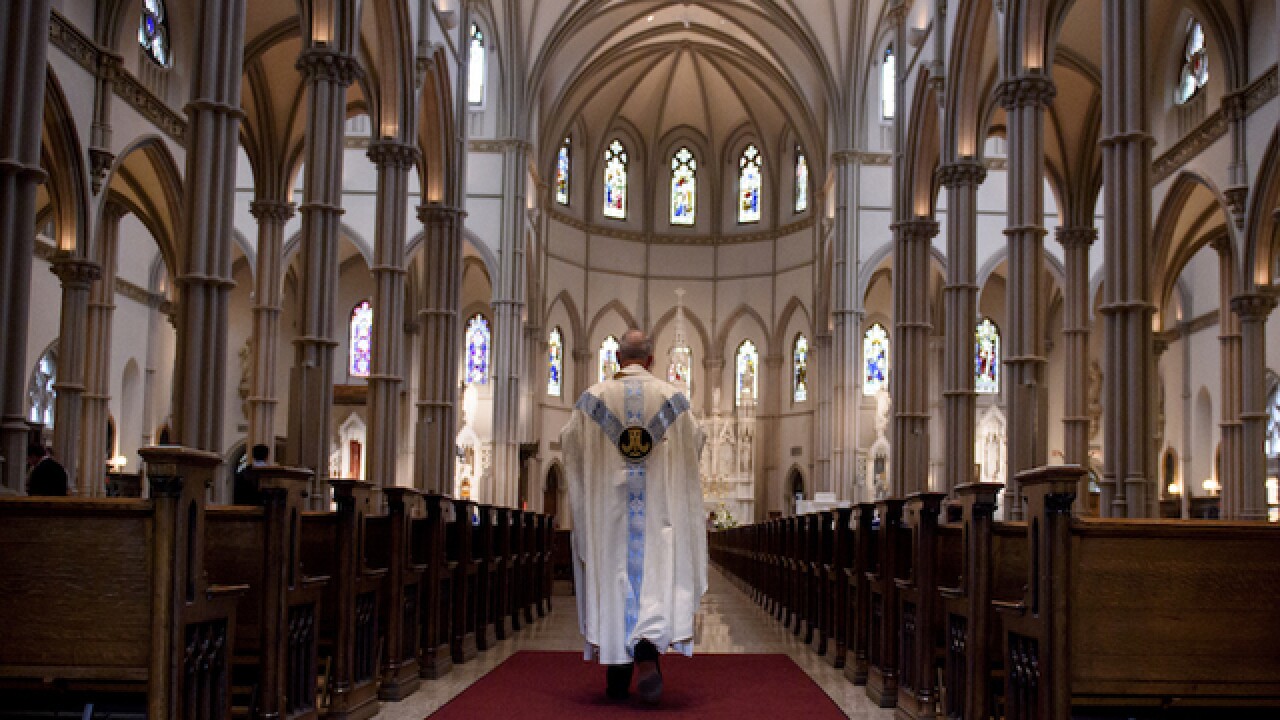 Image copyright 2018 Getty Images. All rights reserved. This material may not be published, broadcast, rewritten, or redistributed.
Jeff Swensen
<p>Father Kris Stubna walks to the sanctuary following a mass to celebrate the Assumption of the Blessed Virgin Mary at St Paul Cathedral, the mother church of the Pittsburgh Diocese on August 15, 2018 in Pittsburgh, Pennsylvania. The Pittsburgh Diocese was rocked by revelations of abuse by priests the day before on August 14, 2018.</p>

The Pennsylvania Supreme court has ordered that the names of 11 priests accused of sexual abuse in a grand jury report remain permanently redacted.

Pennsylvania Attorney General Josh Shapiro had requested that the priests' names be made public. The clergymen are among more than 300 "predator priests" accused of sexually abusing more than 1,000 child victims. The names of more than 270 priests were made public when the report was released in August.

In its opinion released Monday, the Pennsylvania Supreme Court said that the priests' names should remain redacted "to protect their constitutional rights to reputation."

"We acknowledge that this outcome may be unsatisfying to the public and to the victims of the abuse detailed in the report. While we understand and empathize with these perspectives, constitutional rights are of the highest order, and even alleged sexual abusers, or those abetting them, are guaranteed by our Commonwealth's Constitution the right of due process," the court said.

In a dissenting opinion, Chief Justice Thomas Saylor argued for an evidentiary hearing before a supervising judge to determine whether the grand jury record supported the priests' identification.

The priests have claimed that the grand jury's findings were false or misleading, that they were denied due process of law and that the release of their names would impair their reputations. Their court action had delayed the report's publication.

But the Pennsylvania Supreme Court ordered the report's release on August 14 with redactions in sections where litigation was ongoing.

The 11 priests had argued that they were not given the opportunity to defend themselves or present their cases in the grand jury investigation, which they said failed to provide adequate due process protections for those to be named in the report.

Furthermore, they argued that statements by Shapiro -- for example accusing them of seeking to "bury the sexual abuse by priests upon children, and cover it up forever" -- meant they would not be able to get unbiased consideration if they were to present to any additional grand jury proceedings.

The Commonwealth had argued that the the grand jury could have been recalled -- or a new grand jury convened -- to hear the priests' testimony, with a supervisory judge to determine if the evidence supported their identification.

Call for church to name accused

Shapiro condemned the court's decision in a statement issued Monday.

"Today's Order allows predator priests to remain in the shadows and permits the Church to continue concealing their identities," he said. "The public will not relent in its demand that anyone involved in this widespread abuse and cover up be named."

Shapiro called on the Catholic Church, which is not barred by the order, to name the 11 priests.

The grand jury report released in August says internal documents from six Catholic dioceses in Pennsylvania showed that more than 300 "predator priests" had been credibly accused of sexually abusing more than 1,000 child victims.

"We believe that the real number of children whose records were lost or who were afraid ever to come forward is in the thousands," it says.

"Priests were raping little boys and girls, and the men of God who were responsible for them not only did nothing; they hid it all. For decades. Monsignors, auxiliary bishops, bishops, archbishops, cardinals have mostly been protected; many, including some named in this report, have been promoted."

At a news conference announcing the report's release in August, Shapiro called it the "largest, most comprehensive report into child sexual abuse within the Catholic Church ever produced in the United States."