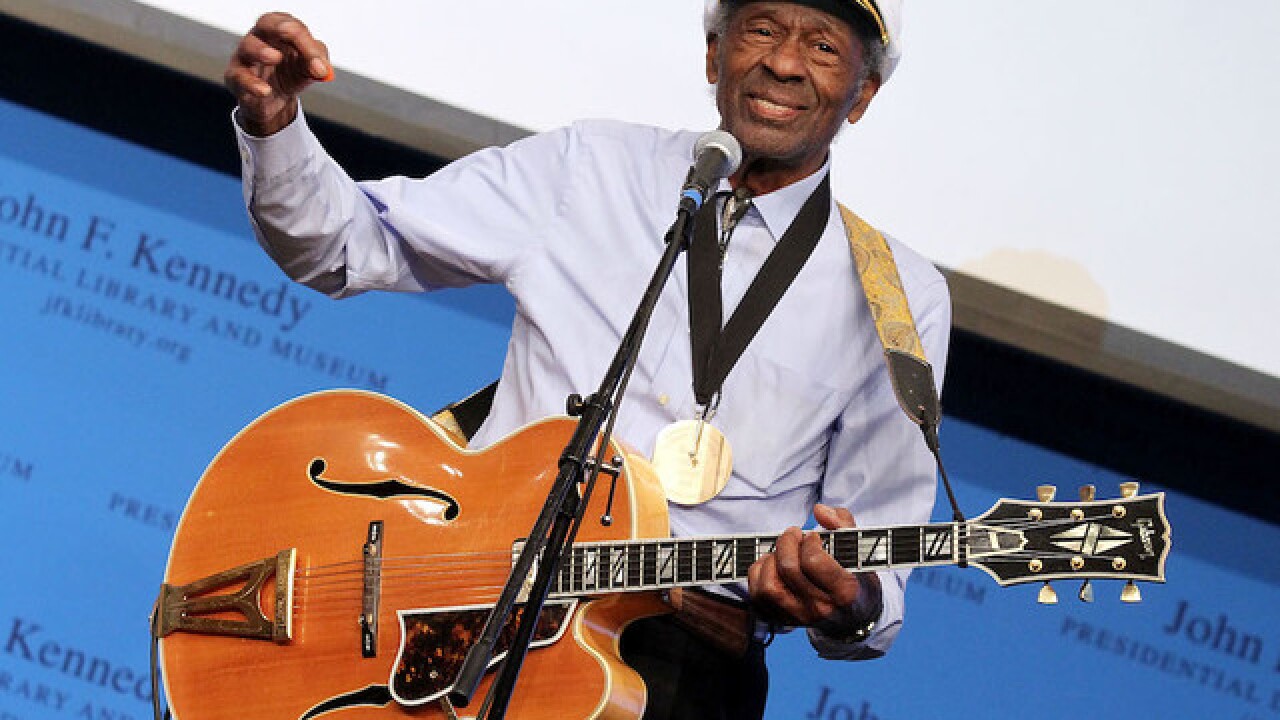 Image copyright 2012 Getty Images. All rights reserved. This material may not be published, broadcast, rewritten, or redistributed.
Marc Andrew Deley
<p>Chuck Berry attends the 2012 Awards for Lyrics of Literary Excellence at The John F. Kennedy Presidential Library And Museum on February 26, 2012 in Boston, Massachusetts.</p>

(CNN) -- Chuck Berry, a music pioneer often called "the Father of Rock 'n' Roll," was found dead Saturday at a residence outside St. Louis, police in St. Charles County said. He was 90.

A post on the St. Charles County police Facebook page said officers responded to a medical emergency at a residence around 12:40 p.m. (1:40 p.m. ET) Saturday and found an unresponsive man inside.

"Unfortunately, the 90-year-old man could not be revived and was pronounced deceased at 1:26 p.m.," the post said. "The St. Charles County Police Department sadly confirms the death of Charles Edward Anderson Berry Sr., better known as legendary musician Chuck Berry."

Berry wrote and recorded songs like "Johnny B. Goode" and "Sweet Little Sixteen" that became standards -- songs every garage band and fledgling guitarist had to learn if they wanted to enter the rock 'n' roll fellowship.

Keith Richards of the Rolling Stones idolized him. Carl Wilson of the Beach Boys copied him. Bob Seger, recognizing Berry's far-reaching influence, sang "All of Chuck's children are out there playing his licks" in Seger's "Rock and Roll Never Forgets."

But perhaps John Lennon put it most succinctly. "If you tried to give rock and roll another name, you might call it 'Chuck Berry.'"

Berry took all-night hamburger stands, brown-eyed handsome men and V-8 Fords and turned them into the stuff of American poetry. By doing so, he gave rise to followers beyond number, bar-band disciples of the electric guitar, who carried his musical message to the far corners of the Earth and even into outer space.

The list of Berry's classics is as well-known as his distinctive, chiming "Chuck Berry riff": "Maybellene." "Around and Around." "Brown-Eyed Handsome Man." "School Days." "Memphis." "Nadine." "No Particular Place to Go."

They were deceptively simple tunes, many constructed with simple chord progressions and classic verse-chorus-verse formats, but their hearts could be as big as teenage hopes on a Saturday night.

His music even went into outer space. When the two Voyager spacecrafts were launched in 1977, each was accompanied on its journey to the outer reaches of the solar system by a phonograph record that contained sounds of Earth -- including "Johnny B. Goode."

Berry, though, was modest about his influence.

"My view remains that I do not deserve all the reward directed on my account for the accomplishments credited to the rock 'n' roll bank of music," he wrote in his 1987 autobiography.

He had a facility with lyrics others could only envy, words and phrases tossed off with a jazzman's cool and a surgeon's precision.

In "You Never Can Tell," he summed up a newlywed couple's life in fewer than two dozen words: "They furnished off an apartment with a two-room Roebuck sale / The coolerator was crammed with TV dinners and ginger ale."

His delivery was often marked by humor, but he could also insert the scalpel when needed. After all, Berry -- a black man who grew up in Jim Crow America, who was close to 30 when he had his first national hit -- knew that those high schools were sometimes segregated, and those diners and highways didn't always welcome him.

"Brown-Eyed Handsome Man" could be read as the story of a brown-SKINNED handsome man, as rock critic Dave Marsh and others have noted; the Louisiana country boy of "Johnny B. Goode" wasn't necessarily Caucasian.

Or consider "Promised Land," the story of a man escaping the South for California. He rides a Greyhound bus across Dixie, moves to a train to get "across Mississippi clean," and finally enters the Golden State on a plane, dressed in a silk suit, "workin' on a T-bone steak." It was the American dream in miniature, a success all the sweeter for overcoming racial prejudice -- never overtly mentioned but present all the same.

There was also a darkness and suspicion in Berry, for those who cared to look. He was notorious for making concert promoters pay him in full before his shows, cash only. In his late teens he served three years in a reformatory, and after becoming famous did jail time on a charge of transporting an underage girl across state lines. Years later he was convicted of tax evasion. He had the showman's talent for saying much and revealing little.

Grew up in St. Louis

For all Berry's mystery and commercial sense, however, at bottom he truly loved the music.

"Rock's so good to me. Rock is my child and my grandfather," he once said.

Charles Edward Anderson Berry was born in St. Louis, Missouri, on October 18, 1926. (Some sources say he was born in San Jose, California.) His parents -- grandchildren of slaves -- were accomplished in their own ways: father Henry was a successful carpenter, and mother Martha was a college graduate -- rare for a black woman at the time. Young Chuck, the fourth of six children, grew up in a middle-class African-American St. Louis neighborhood.

He was inspired to pick up the guitar after singing in a high school talent show. A friend accompanied him and Berry decided to learn the instrument.

Berry was colorblind when it came to music. "They (black and white musicians) jived between each other. All were artists, playing foolish, having fights and making love as if the rest of the world had no racial problems whatsoever," he once said, according to his website. The audience, too, was integrated.

In 1955, at the suggestion of bluesman Muddy Waters, Berry visited Chess Records in Chicago. Chess was a pioneering blues and R&B label, the home of Waters, Howlin' Wolf, the Moonglows and Big Bill Broonzy. The label's owners, brothers Leonard and Philip Chess, suggested Berry cut a few songs. One of them, "Maybellene" -- a rewrite of an old country tune called "Ida Red" -- was released by Chess in August. Within weeks, it had topped the R&B charts and hit No. 5 on the Billboard pop charts. Chuck Berry was suddenly a national star.

The hits kept on coming: "Roll Over Beethoven," "Rock and Roll Music," "Sweet Little Sixteen," "Johnny B. Goode," "Back in the U.S.A." Berry popped up on television and starred alongside pioneering DJ Alan Freed in the movies "Rock Rock Rock!", "Mister Rock and Roll" and "Go, Johnny, Go!" He also appeared in the 1959 documentary about the Newport Jazz Festival, "Jazz on a Summer's Day."

In many respects, he was an unlikely rock 'n' roller. He was in his 30s and a family man in a business that celebrated youth and individualism. And "rock 'n' roll" still carried a taint of the disreputable among older folks.

But Berry -- who always kept a shrewd eye on the bottom line -- wasn't writing for himself.

"Everything I wrote about wasn't about me, but about the people listening," he said.

Berry went through a rough stretch in the early '60s. In December 1959 he was arrested under the Mann Act for transporting an underage woman across state lines for immoral purposes. (It was a tangled tale, involving a runaway.) http://performingsongwriter.com/chuck-berry/ Convicted in 1960, he appealed, but the conviction was upheld at a 1961 trial. Berry was sentenced to three years; he served 20 months.

Upon his release in 1963, he found his music had reached a new generation. The Beach Boys reworked "Sweet Little Sixteen" as "Surfin' U.S.A." (Berry later sued due to the similarities, and won.) The Beatles and Rolling Stones, about to kick off the British Invasion of America, covered Berry's songs. Berry's career was rejuvenated, and he responded with such hits as "No Particular Place to Go" and "Nadine."

That spurt of chart records was short-lived, but even after the hits died down, he remained a popular touring act. His fame was particularly notable in England, and it was a London concert that put him back on the charts for the first time in years. In 1972, he recorded "The London Chuck Berry Sessions," which included the live songs "My Ding-a-Ling" and "Reelin' and Rockin'." The former, a mildly suggestive ode to the male genitalia, became his only No. 1 hit.

Thereafter, Berry's status as a rock legend was assured, even if his behavior was occasionally erratic. He rarely played with an established group of backing musicians, preferring to rely on local pick-up bands. He served three months on tax evasion charges in 1979 and was sued in 1989 for allegedly videotaping female employees at his restaurant.

For all that, he was still Chuck Berry, the "alpha and omega of rock and roll," in the words of former Rolling Stone editor Joe Levy.

He earned more honors than anybody could have imagined. Besides the Rock and Roll Hall of Fame induction, he had a statue dedicated to him in St. Louis (he's portrayed doing his famous hunched-over "duck walk"); received PEN New England's inaugural award for Song Lyrics of Literary Excellence; a Grammy Lifetime Achievement Award; a BMI Icon honor; and a Kennedy Center Honors Award, at which Bill Clinton called him "one of the 20th Century's most influential musicians."

"In my universe, Chuck is irreplaceable," Bob Dylan told Rolling Stone in 2009. "All that brilliance is still there, and he's still a force of nature. As long as Chuck Berry's around, everything's as it should be. This is a man who has been through it all. The world treated him so nasty. But in the end, it was the world that got beat."