Can a marathon be run in under two hours? 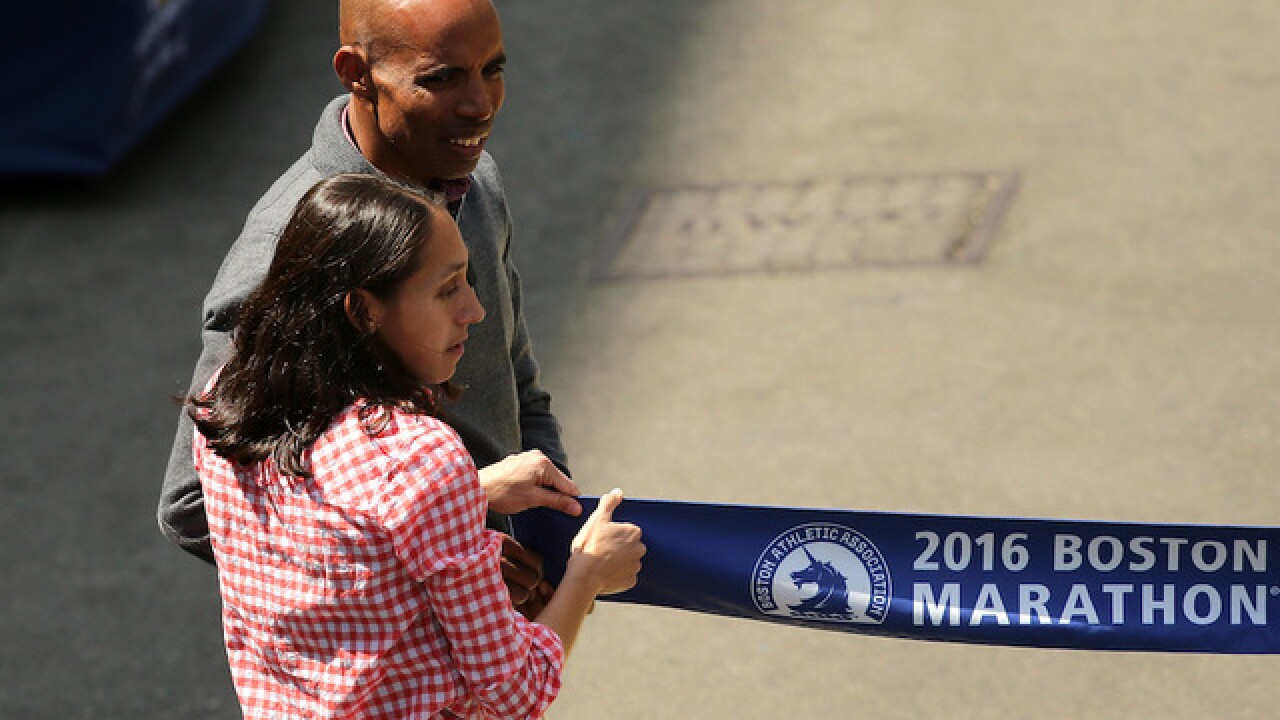 Nearly everyone who starts the Boston Marathon completes it. In 2016, around 97% of the starters finished.

The 121st running of the race began Monday morning.

Even for non-qualifying marathons, such as Disney or Tokyo, the average percentage of completion hovers around 90%.

While many of the roughly half million people in the US who show up every year at a marathon start line are well-trained, most are still recreational runners. For them, a marathon is often the first time they have run 26.2 miles, and they suffer the consequences.

They have little idea about pacing, nutrition, hydration or what to do when your glycogen stores suddenly run dry. Yet still, when they hit the proverbial wall of pain and fatigue, nine times out of ten -- they push through.

Additionally, they are more likely to finish if they were closer to 50 years old, rather than 20. It seems marathoners reflect a significant level of mental toughness, and that toughness appears to grow into middle age.

For seasoned marathoners, these statistics may come as no big surprise. Mental toughness or grit is also one of the reasons a few groups of scientists around the world believe they can do something never before achieved in the world of marathon running: break the two hour mark.

What it means to break 2 hours

The fastest time recorded for a marathon is two hours, two minutes, and 57 seconds. It was set by Dennis Kimetto at the Berlin Marathon in 2014. That is an average pace of 4 minutes, 41.5 seconds -- for 26.2 miles. It is at once both insanity, and deeply inspiring.

And many in the running community believe we can go even faster.

To break a 2-hour mark would require a runner to shave nearly 7 seconds off every mile, achieving a per/mile pace just below 4 minutes and 35 seconds. It is incredibly audacious.

Keep in mind, for runners at this elite level, shaving even a fraction of a second every mile is a physical super-feat.

A review of current data shows it took nearly two decades to decrease the world record by 3 minutes. But to do it in one leap has become the obsession of some runners and scientists.

Academic research team Sub2 seeks to break the two hour mark in the next 5 years and big sports brands such as Adidas and Nike are dedicating resources to the effort as well.

In order to investigate more, I traveled to the Nike world headquarters in Beaverton, Oregon. It is a place hyper-focused on human optimization. Most of the buildings on campus are named after elite athletes, such as Tiger Woods, Michael Jordan, Bo Jackson, Pete Sampras, John McEnroe, and of course Steve Prefontaine, the athlete who helped popularize running in the 1970's.

I checked into the Mia Hamm building, home to the Nike Sports Research Lab (NSRL), where several members of the team who are convinced Breaking2, as they call it, is within reach.

The science of shoes and apparel

I spent two days chatting with experts in shoe design and innovation as well as physiologists and trainers. I even tested my own capabilities on an NSRL treadmill while running in a pair of Zoom Vaporfly Elite prototypes, the shoes Nike believes can in fact make a runner faster.

The shoe looked far bigger and more clunky than I expected, a significant design departure from the minimalist and lightweight shoes most marathoners currently wear. To be clear, though, it's not that the shoe necessarily has any extra spring boost, as I learned after dissecting it into its components.

The secret sauce has more to do with a thin carbon fiber plate which sits between two generous pads of foam. This plate serves to keep the foot from bending as much at the metatarsophalangeal (MTP) joints between your toes and your forefoot.

The idea is that runners "bleed" a certain amount of energy the more those joints are flexed, and this plate helps reduce the loss.

Bret Schoolmeester, head of Nike footwear for the global running division, puts a number on how much the shoes can help: 4%.

He says the Zoom Vaporfly Elites improve "running economy" by 4% -- that's the amount of energy required at any particular running speed.

In the lab, lead physiologist Brett Kirby and research director Brad Wilkins put me to the test in a pair of the prototypes the Breaking2 athletes will use in the record-breaking attempt. As soon as I laced up the shoes, I felt myself rocking back and forth. These shoes make you want to move, and I could not stand still.

As I jumped onto the treadmill, I urged Kirby and Wilkins to crank up the speed as quickly as possible, because it was more comfortable to be running than walking. And, looking carefully at slow-motion video of my running gait, I realized the shoes made me more of a mid-foot striker, rather than a fore-foot striker.

It was a different style of running for me, and yet it still felt very natural.

In addition to the shoes, the Breaking2 team has focused a lot on apparel. It is a departure from the usual free-flowing shorts and singlets we're used to seeing on long-distance runners.

To gain as much of a time advantage as possible, the look for Breaking2 is skin-tight, like a sprinter, using materials such as lycra and polyester. On the front of the singlet-style shirt, as well as the mid-thigh shorts, there are small rubbery blades that Steve Jackson, Innovation Project Director, told me urges air along the runner, cutting down friction.

Besides apparel, there are a few other pillars the Breaking2 team are focused on optimizing.

Overall training is driven by a runner's VO2 max. You probably hear the term a lot -- and simply, it means the maximum amount of oxygen your body can utilize during intense exercise.

V02 is determined by how much blood your heart can pump and how well your muscles can grab oxygen out of the blood stream. While one's VO2 max is, in part, genetically determined, the truth is most never reach their true potential.

Three runners were selected by Nike to help break the record. They are -- Eluid Kipchoge, 32, from Kenya, Lelisa Desisa, 26, from Ethiopia, and Zersenay Tadese, 34, from Eritrea.

Among other factors, they were chosen on three key measurements: V02 max, running economy, and velocity. With all of this data, Nike researchers are convinced they can predict the final marathon time for their runners if they made the attempt today.

For the record, my oxygen consumption was fairly low while running an 8-minute-per mile pace. And, the lower the oxygen consumption, the better. It means you require less oxygen and energy to run a certain pace.

Interestingly though, when I slowed my running pace, my oxygen consumption actually increased, signaling a loss of running efficiency. I quickly learned my sweet spot was running slightly faster than I previously thought.

Kirby and Wilkins assured me my numbers were quite good, but then added this humbling fact: Their three runners were running nearly twice as fast as I, and consuming slightly less oxygen, for two hours, non-stop.

Two of the other important pillars are more obvious. Given the runners are expected to lose two litres of fluid over two hours, the right hydration at the right time is predetermined and delivered by mopeds, making it possible for the runners to maintain pace. In addition to the mopeds, a truck will travel in front of the runner constantly displaying a large clock and giving a split time nearly every minute.

When I suggested to Matt Nurse, VP of the NSRL, this might be too much distracting information, he reminded me that if a runner didn't maintain pace even for a couple of minutes, they would never be able to capture the time back. Constant reminders were necessary.

Besides, apparel and shoes, nutrition and hydration, physiology and training and athlete selection, the final pillar has to do with environment. After an exhaustive search around the world, Breaking2 settled on a Formula 1 race course in Monza, Italy, near Milan.

With its gentle curves, and overall flatness (an elevation change of only 18 feet over 2.4 kilometers), the track is an ideal layout.

With favorable temperatures and humidity in the Spring, the conditions have the potential to be close to ideal for a marathon -- as long as the weather cooperates on the day of the attempt.

We were in Monza to see how the runners fared in a test half-marathon in early March, where Kipchoge finished his 13.2-mile run in 59 minutes and 17 seconds, on pace to break the record.

Of course, success in all of these pillars still hinges on one large unknown: mental toughness or grit.

Scientists have proven any of these runners are capable, and the athletes themselves have demonstrated they are capable of setting a new bar in the world of human performance. It will likely come down to how much they want it -- how much they want to run a marathon faster than anyone before them.

That question could be answered as early as May when Nike has scheduled the full marathon attempt.