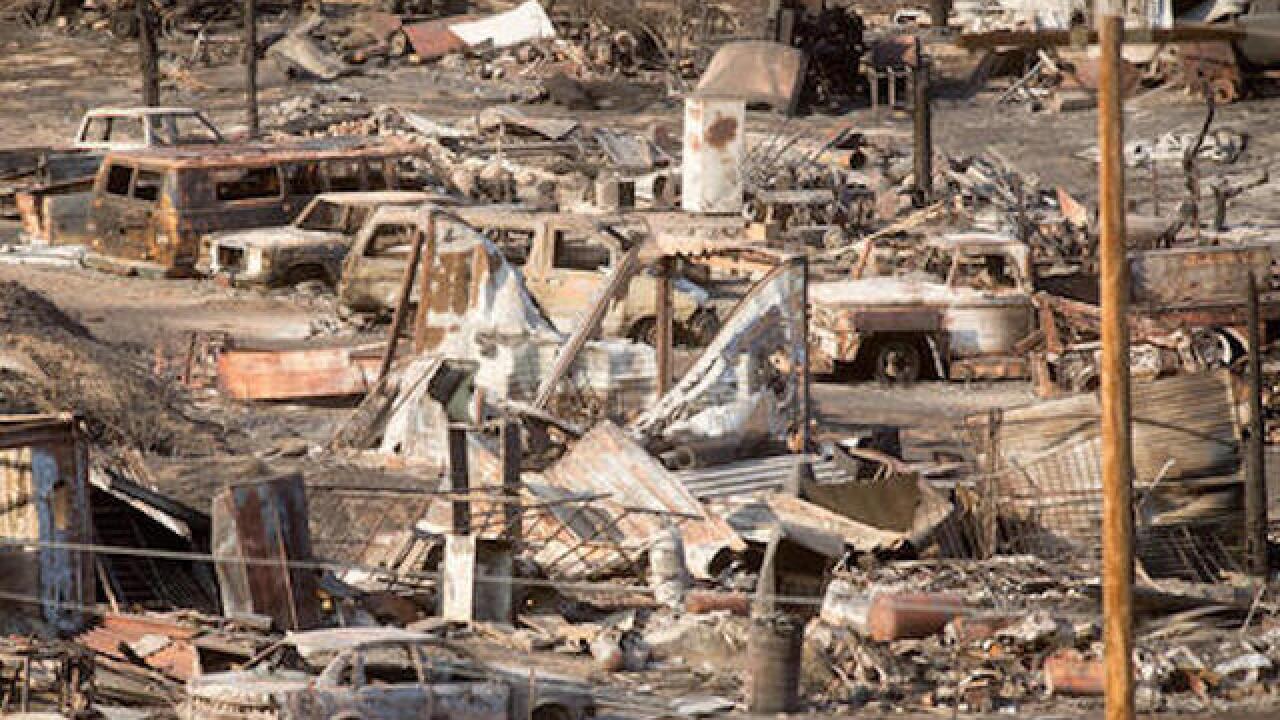 Copyright Associated Press
Noah Berger
<p>Scorched cars and trailers burned by the Blue Cut fire line a residential street in Phelan, Calif., on Friday, Aug. 19, 2016. More people returned to their homes Friday as firefighters made significant progress against a huge wildfire burning in Southern California's San Bernardino National Forest, but that was tempered by the announcement that at least 96 homes and 213 outbuildings were destroyed. (AP Photo/Noah Berger)</p>

PHELAN, Calif. (AP) — Crews made huge gains against a massive wildfire in Southern California as residents anxiously awaited word that they can return to mountain communities where at least 96 homes were destroyed.

The blaze was 68 percent contained on Saturday and firefighters were transitioning to mop-up phase, according to fire spokesman Brad Pitassi.

Pitassi estimated that about 7,000 people remained under mandatory evacuation orders, mostly around the areas of Wrightwood and Lytle Creek. The majority of those evacuated were allowed to return Friday evening. At the height of the fire, some 82,000 people were under evacuation orders.

A preliminary assessment found 96 homes and 213 outbuildings were destroyed by the blaze, most of them in its first fierce days on Tuesday and Wednesday.

More damage might still be discovered as firefighters pore through the aftermath of the fire that had burned 58 square miles about 60 miles east of Los Angeles in San Bernardino County.

Johanna Santore was among those left homeless. She was running an errand Tuesday when the fire charged through her neighborhood. She tried to rush home to rescue the family's four dogs, six cats and hamster but was blocked by closed roads.

A group of animal rescue volunteers found the house in smoldering ruins — with no signs of the pets.

"I'm actually feeling numb," said Santore, who fled with her husband and granddaughter to an evacuation center. "It's like a nightmare."

A prolonged drought has transformed swaths of California into tinderboxes, ready to ignite. Several other wildfires were burning in the state, including a blaze in rural Santa Barbara County that prompted the evacuation of a pair of campgrounds.

In the southern Sierra Nevada, another blaze feeding on dense timber in Sequoia National Forest forced the evacuation of several tiny hamlets.

Another blaze burned in Santa Barbara County and forced the evacuation of a pair of campgrounds during the height of the summer season.

In mountains north of San Francisco, a 6-square-mile blaze was 80 percent contained after destroying 300 structures, including 189 homes and eight businesses, in the working-class ommunity of Lower Lake. All evacuation orders have been canceled.

No deaths have been reported in the fire east of Los Angeles and the cause of the fire was under investigation. Crews continued to sift through burned regions to tally the damage.

The Santores weren't as lucky. Volunteers who drove to their house found a moonscape. Some of the neighbors' homes were still standing, seemingly intact.

Before the fire roared through, Johanna Santore had redecorated her granddaughter's room in a zebra pattern and added a loft bed.

"We don't plan on rebuilding," she said. "We plan on leaving."