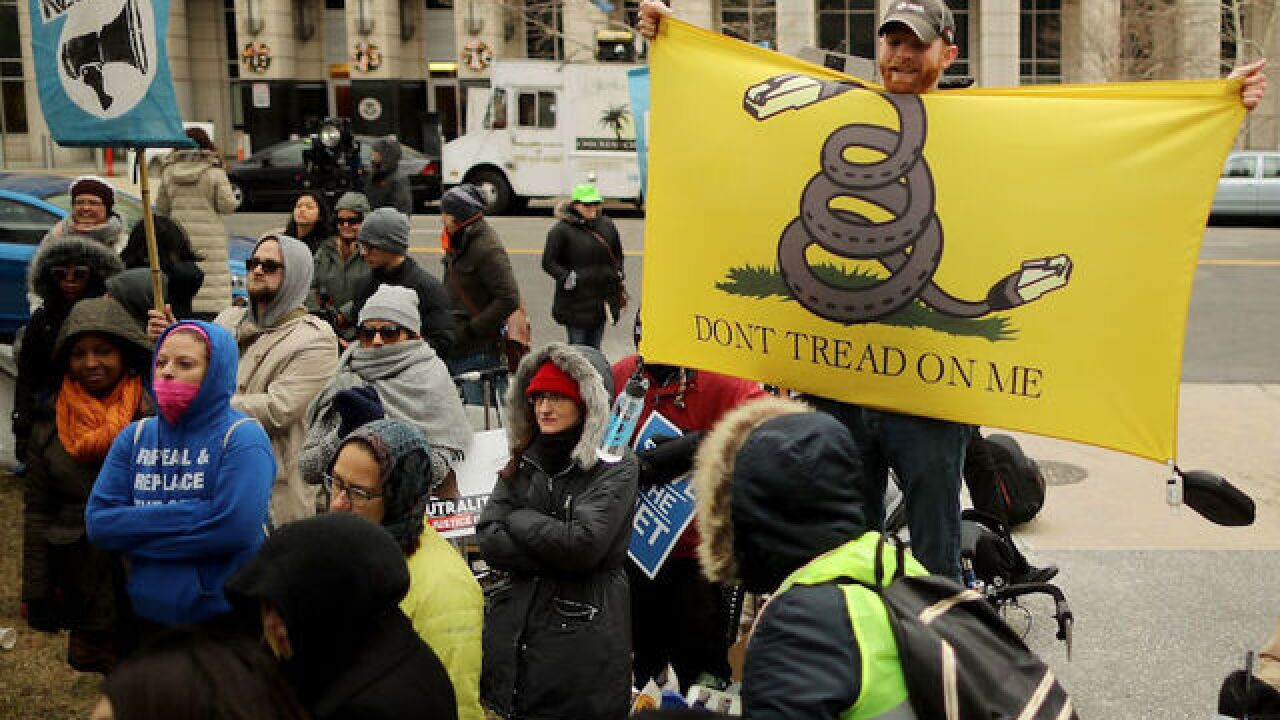 Image copyright 2017 Getty Images. All rights reserved. This material may not be published, broadcast, rewritten, or redistributed.
Chip Somodevilla
<p>Demonstrators rally outside the Federal Communication Commission building to protest against the end of net neutrality rules December 14, 2017 in Washington, DC. </p>

California is taking net neutrality regulations into its own hands.

State lawmakers voted to pass a bill restoring net neutrality protections Friday. If signed into law by Governor Jerry Brown, it would ensure all California broadband customers have equal access to content on the internet.

The law would be the strictest for internet providers in the United States, and put California at odds with the federal government.

The Republican-led Federal Communications Commission voted to overturn Obama-era net neutrality protections earlier this year. Ajit Pai, the FCC chairman appointed by President Donald Trump, pitched the repeal as a way to stop the federal government from "micromanaging the internet."

"When Donald Trump's FCC decided to take a wrecking ball to net neutrality protections, we knew that California had to step in to ensure our residents have access to a free and open internet," California State Senator Scott Wiener, a Democrat who sponsored the bill, said in a statement. "We hope that other states can look to this legislation as a model for net neutrality standards."

The California bill prohibits internet providers from blocking, slowing down, or speeding up content from certain sites or apps. For example, a company could not give free speedy access to its own streaming service but slow down Netflix. Under the proposed rules, providers cannot charge companies fees for a better connection, or allow zero rating -- when a provider doesn't count certain content against a plan's data cap.

It will now head to Governor Brown, who has until September 30 to veto the legislation or sign it into law. Brown has not publicly stated whether or not he will sign the bill, though it has broad support from state Democrats.

The federal government could sue the state of California over the law, leading to an eventual showdown in the Supreme Court.

The legislation has been championed by consumer advocacy groups, small businesses, and some technology companies including Sonos, Etsy and Reddit, but criticized by the telecom industry.

Internet providers including Comcast and AT&T have lobbied against the law, and claim it could raise internet prices. AT&T is the parent company of CNN. Industry groups are urging Governor Brown to veto the bill.

"The internet must be governed by a single, uniform and consistent national policy framework, not state-by-state piecemeal approaches," said Jonathan Spalter, President & CEO of USTelecom, a trade group representing broadband companies. "Governor Brown should use his veto pen on this legislation, and Congress should step in to legislate and provide consumer protections that will resolve this issue once and for all."

Internet providers also argue it could lead to higher prices for consumers.

"The ban on zero rating could lead to an increase of $30 a month on the bills of low income Californians and the ban on interconnection fees could lead to a reduction in investment in California by more than $1 billion a year," said an AT&T spokesperson in a statement. "We support an open internet, but this bill move us no closer to that."

California would become the fourth state to pass its own net neutrality protections, but the largest and most consequential. Supporters of net neutrality rules have been fighting the FCC's ruling on multiple fronts. In January, attorneys general of more than 20 states sued the FCC. Nearly three dozen other states are working on their own laws, and supporters hope California's bill will inspire even more states to follow suit.

The FCC did not reply to a request for comment.

"If there's one thing this victory in California shows it's that Internet users are still royally pissed off about the FCC's repeal of net neutrality. They're still paying attention. And they're not going to let their elected officials get away with selling out their constituents by siding with big telecom companies," said Evan Greer, deputy director of Fight for the Future, a non-profit consumer advocacy group.

This is the second time California passed a major law regulating the internet this year. In June, it became the first state to pass internet privacy legislation, giving consumer more control over their personal data. It faced opposition from major technology players, including Facebook, Google and Amazon.