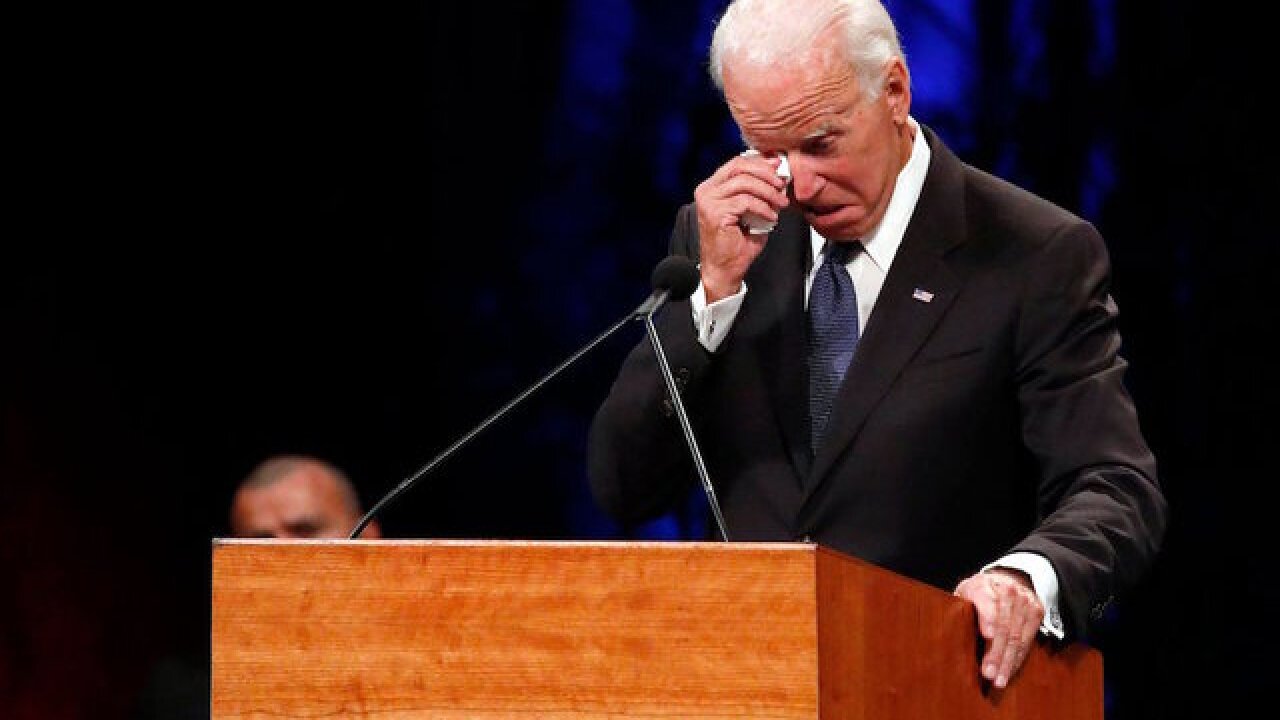 © 2018 Cable News Network, Inc.
Jae C. Hong/AP
<p>Former Vice President Joe Biden paid tribute to the late Sen. John McCain in Phoenix in a speech at his memorial service on Thursday, sharing personal stories about their time together in the Senate and lamenting disorder and division in the chamber that McCain fought to repair.</p>

Former Vice President Joe Biden paid tribute to the late Sen. John McCain in Phoenix in a speech at his memorial service on Thursday, sharing personal stories about their time together in the Senate and lamenting disorder and division in the chamber that McCain fought to repair.

"We both loved the Senate," said Biden, who mourned the fading of bipartisanship in the chamber over the years. "We both lamented, watching it change."

Biden and McCain used to sit next to each other during long debates in the 1980s and '90s. In 1996, they were each told independently by members of their own parties that their visible friendship didn't look good.

"That's when things began to change for the worse in America in the Senate. That's when it changed," Biden said.

Biden's remarks were similar to a spirited McCain speech on the Senate floor last summer, in which the Arizona Republican begged his colleagues to restore to the chamber a spirit of compromise that had helped forge national greatness.

The former vice president recalled that McCain spent his final day on the Senate floor trying to restore order.

"What was he fighting to do?" Biden asked. "He was fighting to restore what you call 'regular order.'"

'I always thought of John as a brother'

"The way I look at it, the way I thought about it was that I always thought of John as a brother," Biden said. "We had a hell of a lot of family fights. We go back a long way."

Biden, who got to know McCain when he served as a Navy liason for the Senate, recalled traveling around the world with the future Arizona senator in the 1970s as part of his duties on the Senate Foreign Relations Committee. Biden said they "were optimists" and spoke about everything except his family's recent deaths and McCain's time as a prisoner of war in Vietnam.

"I trusted John with my life and I would think he would trust me with his," he added.

McCain would call him in the middle of a campaign to give him advice, Biden recalled.

"Whenever I was in trouble, John was the first guy there ... He would call me in the middle of the campaign (and) say, 'What the hell did you say that for? You just screwed up, Joe,'" he said.

Biden also spoke about glioblastoma, the cancer that took the lives of his son Beau, McCain and Sen. Ted Kennedy.

"It's brutal. It's relentless. It's unforgiving. And it takes so much from those we love and from the families who love them that in order to survive, we have to remember how they lived, not how they died," said Biden, who heads initiatives into cancer research.

Biden later went on to express solidarity with the family mourning, saying experiencing a loss is "like being sucked into a black hole inside your chest. It's frightening."

"But, I know something else, unfortunately, from experience, that there's nothing anyone can say or do to ease the pain right now. But I pray, I pray you take some comfort knowing that because you shared John with all of us, your whole life, the world now shares with you in the ache of John's death."There are times when life can be so cruel, pain so blinding it's hard to see anything else."