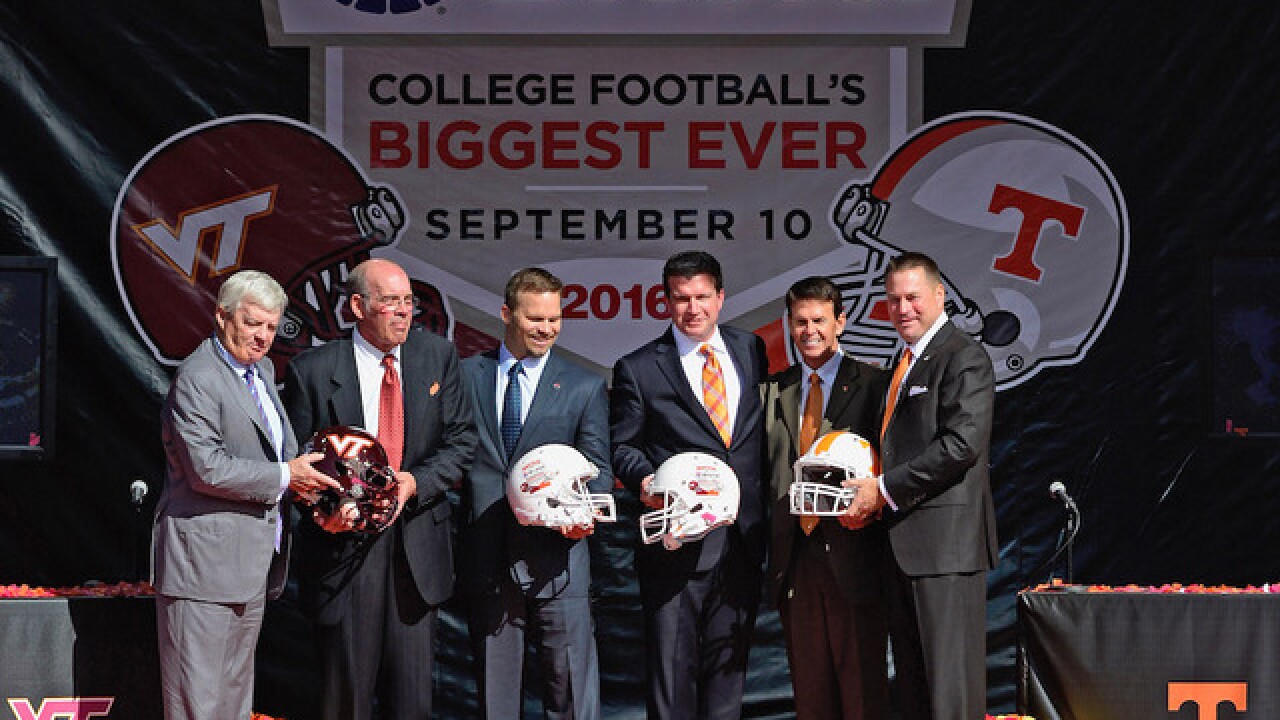 It’s being billed as the biggest college football game ever.

The University of Tennessee Volunteers and Virginia Tech Hokies will meet Sept. 10 in a space that’s normally surrounded by speeding vehicles — where a massive transformation is currently under way.

The Pilot Flying J Battle at Bristol at the Bristol Motor Speedway is going to be historic. It’s a game that’s designed around its location — UT fans live on one side of the racetrack, and VT fans are on the other.

Both schools are just more than 100 miles from the racetrack.

Work on transforming the racetrack into a football game arena began after Sunday’s Sprint Cup Race. A live cam has been streaming on the Pilot Flying J Battle at Bristol website so fans may see the massive transformation from track to gridiron. Hundreds of people are involved.

Battle at Bristol is an event that’s been discussed since the early 2000s, according to SECcountry.com. Bruton Smith’s Speedway Motorsports Company bought the track in 1996 with an interest in both racing and football. The Battle event was announced in 2013, and Pilot Flying J — owned by former Volunteer football player Jim Haslam — was announced as the sponsor last year.

One of the big attractions expected at the game is the largest-ever center-hung screen, a video board that weighs 700 tons and will be hanging over the field. The board, called “Colossus,” features 54 million LED lights, SECcountry.com says.

#Colossus definitely lives up to its name! ? This thing is HUGE! #ItsBristolBaby -MM pic.twitter.com/gS9ZS5sw4J

Racecar driver meeting rooms are being converted into locker rooms. Additional stands are being added to the straightaways while turns will become end zones.

The Battle at Bristol will have room for nearly 160,000 fans. It’s so big, the Guinness Book of World Records will be on hand to authenticate it as the largest college football game ever.

Country musicians Kenny Chesney, The Band Perry and Old Dominion will perform on Friday evening, Sept. 9. The game kicks off at 8:15 p.m. EDT on Saturday, with pre-game ceremonies starting at 7:30 p.m.