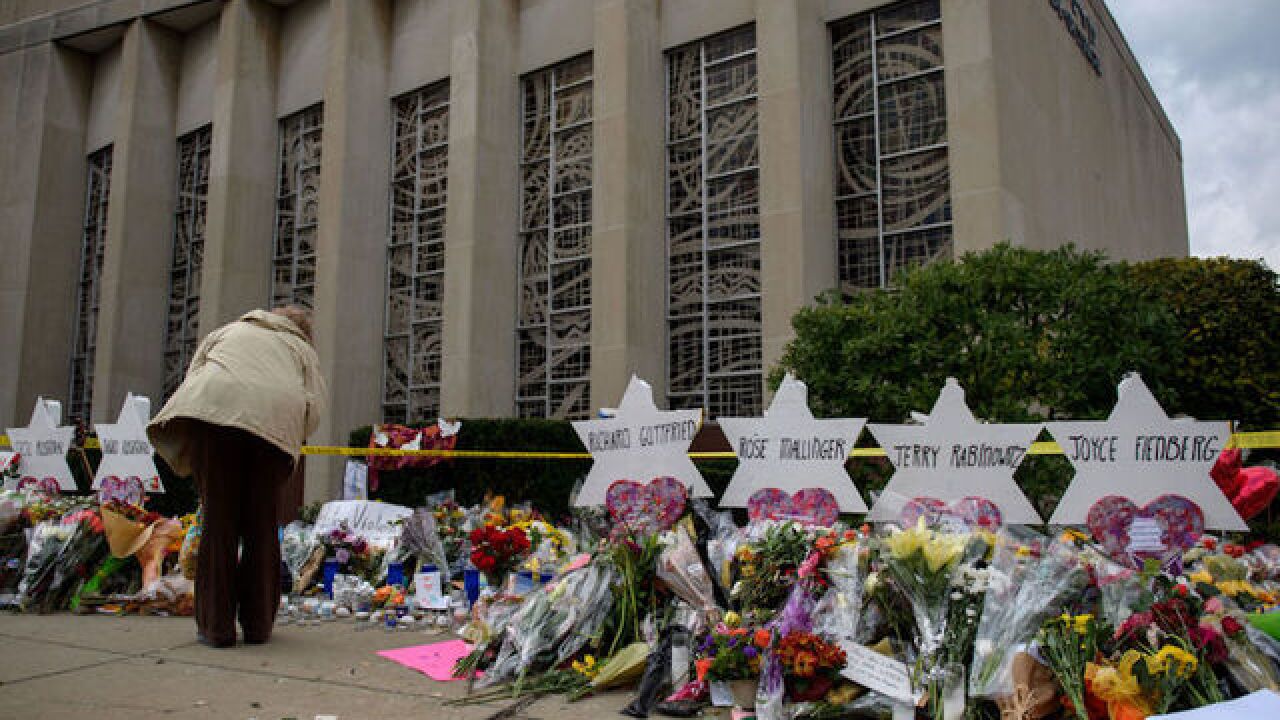 Image copyright 2018 Getty Images. All rights reserved. This material may not be published, broadcast, rewritten, or redistributed.
Jeff Swensen
<p>Mourners visit the memorial outside the Tree of Life Synagogue on October 31, 2018 in Pittsburgh, Pennsylvania. </p>

A California synagogue has been vandalized with anti-Semitic graffiti less than a week after a gunman killed 11 Jewish worshipers in Pittsburgh.

The Irvine Police Department posted a surveillance-camera video of a man in a hoodie spraying the exterior of the synagogue.

"IPD has reached out to its partners in the Jewish community to reaffirm the Department's commitment to protecting their members, houses of worship and educational institutions," the department posted on Facebook.

Mayor Don Wagner said the vandalism and a similar anti-Semitic incident at Irvine Valley College are "enraging and unacceptable."

In early October, police found swastikas scrawled in the restrooms of the college, according to a local councilwoman.

"These two local acts of hate, and even more so the senseless, wanton murder of 11 innocent people in Pittsburgh, remind us that historical prejudices remain alive in evil people," Wagner said in a statement.

He also vowed to work with police, the city council and the Orange County District Attorney's Office to identify the vandal.

"Anti-Semitism cannot be acceptable in this country; it will not be ignored in Irvine," he said. "We will... continue to do everything in our power to condemn anti-Semitism and to protect Irvine's Jewish community and also everyone of any race, religion or ethnic background in this city."

Other cities have seen anti-Semitic acts this week

Swastikas have appeared in at least a handful of U.S. cities since the massacre in Pittsburgh.

On Wednesday morning, a New York City resident posted pictures of swastikas that had been scrawled on homes in the Brooklyn Heights neighborhood.

"Praying they're gone before all our children flood the street to celebrate Halloween tonight," Sandy Maltzman tweeted.

The Nazi symbols also appeared on Navy property this week in Bucks County near Philadelphia. Warminster Township Manager Gregg Schuster posted online that local officials have been in contact with the Navy to get the symbols removed.

"The use of the swastika is a cowardly act," he said. "In light of what our neighbors in Pittsburgh recently went through, I hope we can refrain from using these symbols of hate. There is no place in Warminster for this disgusting act and I know our community will never accept this behavior."

A swastika also was found scrawled on a piece of paper in an elevator Monday at the Eastman School of Music in Rochester, New York, according to CNN affiliate WHAM.

Anti-Semitic incidents have been increasing in the U.S. in the last few years, according to the Anti-Defamation League

The Rabbinical Assembly, an international association of conservative rabbis, said last weekend's shooting is a reminder that anti-Semitism "is on the rise in America at a rate unprecedented in decades."