After deadly stabbings, 2 Miss. nuns remembered for helping the needy 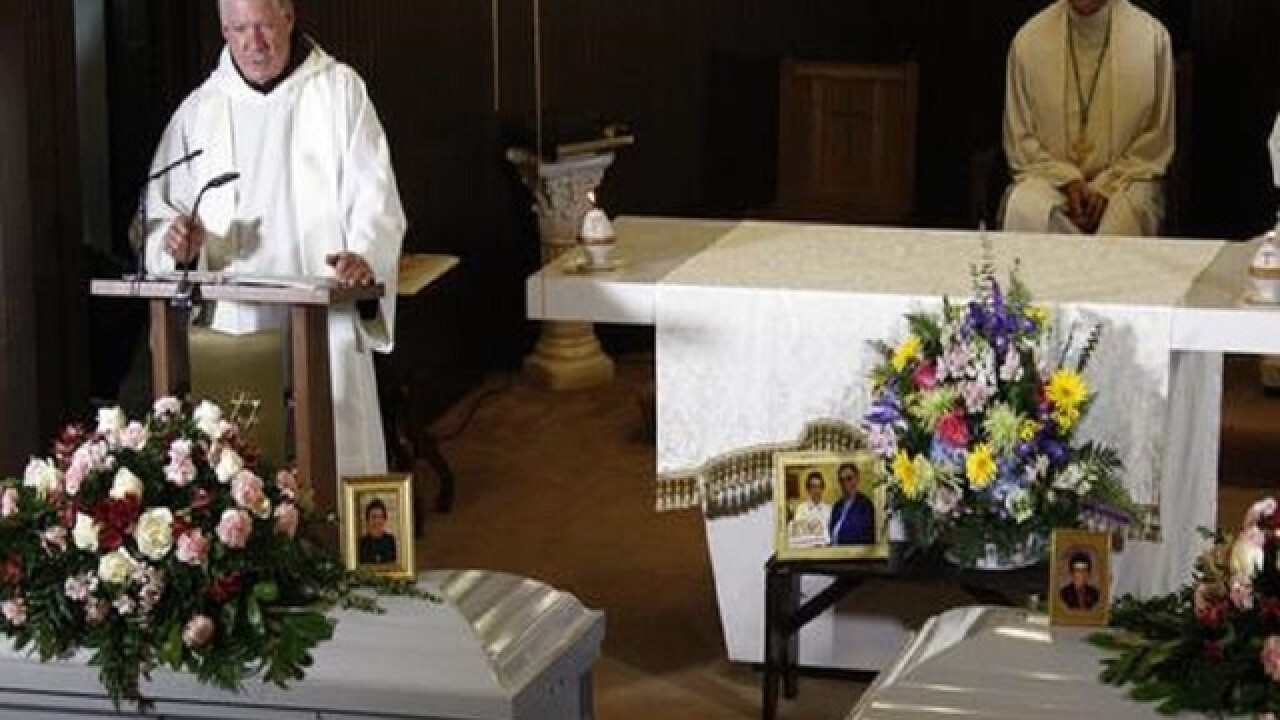 DURANT, Miss. (AP) — Hundreds of people filled a cathedral in Mississippi's capital city on Monday to remember two nuns who spent decades helping the needy and were found stabbed to death last week in their home in one of the poorest counties of the state.
Bail was denied during the initial court appearance for the man charged with two counts of capital murder in the slayings of Sisters Margaret Held and Paula Merrill, both 68. Rodney Earl Sanders, 46, of Kosciusko, Mississippi, was also charged with one count of burglary and one count of grand larceny. He was not represented by an attorney during his appearance Monday afternoon in Durant city court. City Judge Jim Arnold said the state will appoint an attorney for Sanders.
Capital murder is punishable by execution or life in prison; the sisters' religious orders have issued a joint statement against the death penalty.
"We are going to consider the heinous nature of the crime and their wishes," District Attorney Akillie Malone-Oliver said Monday, referring to the families of the sisters and their religious orders.
Sanders confessed to the killings but gave no reason, said Holmes County Sheriff Willie March, who was briefed by Durant police and Mississippi Bureau of Investigation officials who took part in Sanders' interrogation. Sanders had been living about 15 miles east of the sisters' Durant home. He has been held at an undisclosed jail since his arrest late Friday.
Sanders' wife attended the hearing and broke down afterward when addressing the family and friends of the nuns.
"I'm sorry. I don't know what to say to y'all. I'm so sorry ... I'm so sorry. I can't take this. Oh my God," Marie Sanders said.
Merrill and Held worked as nurse practitioners at Lexington Medical Clinic, about 10 miles west of Durant, where they often treated poor and uninsured patients with diabetes and other chronic conditions. Their bodies were found in their home after they failed to show up at work Thursday.
The clinic in Lexington and the nuns' home in Durant are in Holmes County, population 18,000. With 44 percent of its residents living in poverty, Holmes is the seventh-poorest county in America, according to the Census Bureau. The killings shocked people in the small communities where the women committed their lives to helping the poor.
Bishop Joseph Kopacz and more than 20 priests from the Diocese of Jackson celebrated a memorial Mass on Monday at the small but ornate Cathedral of St. Peter in downtown Jackson, about an hour's drive south of Durant. The front pews were filled by family members and sisters from Held's and Merrill's religious orders, the Kentucky-based Sisters of Charity of Nazareth and the School Sisters of St. Francis of Milwaukee.
The Rev. Greg Plata, who ministers at the church in Lexington, Mississippi, where Held and Merrill led Bible study, praised them for their lives of service. Plata also noted the joint statement against the death penalty released Sunday by the sisters' orders.
"Justice for a heinous crime demands punishment, but it does not demand revenge," Plata said.
On Sunday, more than 300 people attended a service at the church in Lexington.
Warren Strain, spokesman for the Department of Public Safety which includes the Mississippi Bureau of Investigation, said the organization would neither confirm nor deny that Sanders confessed.
Records from the Iowa Department of Corrections show Sanders was in prison from June 2004 to February 2011 on a conviction of second-degree robbery. Records show he also was in prison in Iowa from August 1999 to August 2002 on a conviction of theft, and from April to October 1996 for two counts of third-offense drunken driving.
Sanders was on probation after a prison term for a felony drunken-driving conviction in Mississippi last year, said Grace Simmons Fisher, a spokeswoman for the Mississippi Department of Corrections. He was also convicted of armed robbery in Holmes County, sentenced in 1986 and served six years.
Copyright 2016 The Associated Press. All rights reserved. This material may not be published, broadcast, rewritten or redistributed.