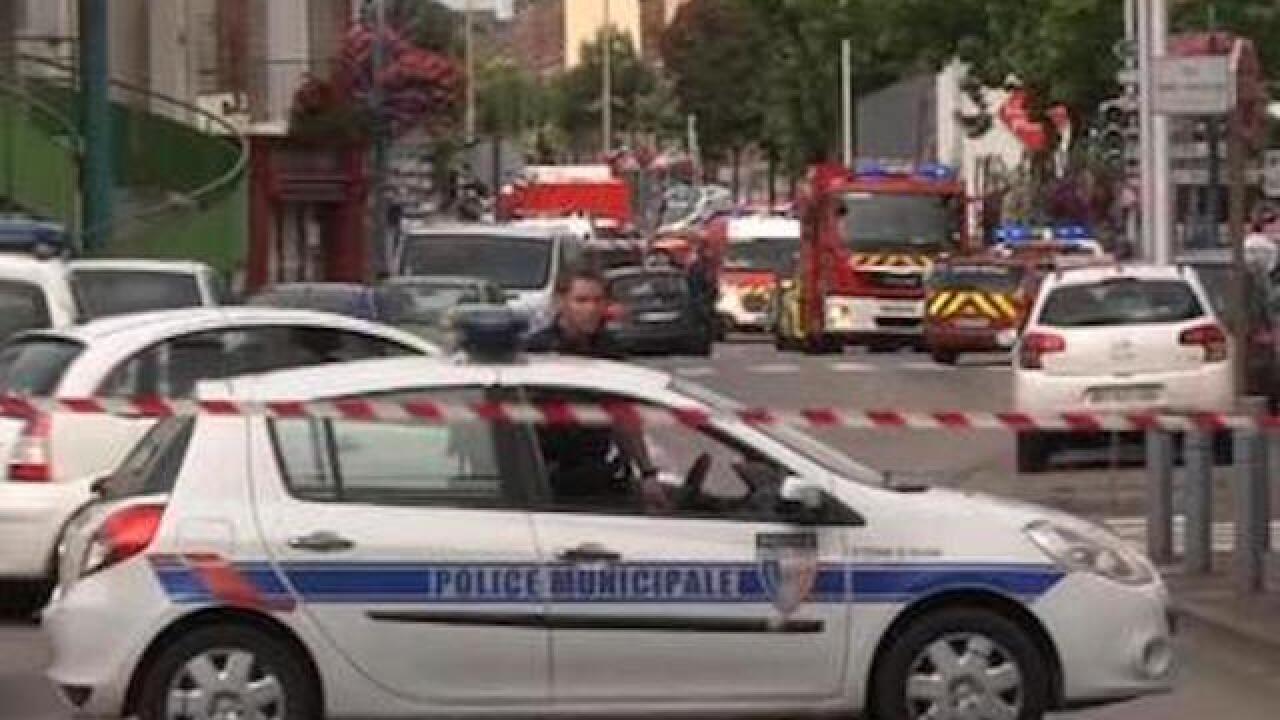 Copyright Associated Press
<p>In this grab made from video, police officers close off a road during a hostage situation in Normandy, France, Tuesday, July 26, 2016. Two attackers seized hostages in a church near the Normandy city of Rouen on Tuesday, killing one hostage by slitting their throat before being killed by police, a security official said. The identities of the attackers and motive for the attack are unclear, according to the official, who was not authorized to be publicly named. (BFM via AP)</p>

SAINTE-ETIENNE-DU-ROUVRAY, France (AP) — Two attackers slit the throat of an 86-year-old priest celebrating Mass in a French church, killing him and gravely injuring one of the few worshippers present before being shot to death by police. A nun who escaped said she saw the attackers video themselves and "give a sermon in Arabic" around the altar.

The Islamic State group claimed responsibility for the first attack in a church in the West.

Police rescued three other people inside the church — including a second nun — in the small northwestern town of Saint-Etienne-du-Rouvray, said Interior Ministry spokesman Pierre-Henry Brandet.

A regional Muslim leader said one of the two attackers — both killed outside the church — was known to police. A police official said he had tried to go to Syria.

It was the first known attack claimed by IS inside a church in the West. A church outside Paris was targeted last year, but the attack never was carried out.

A statement published by the Islamic State-affiliated Amaq news agency said the attack was carried out by "two soldiers of the Islamic State" who acted in response to calls to target nations in the U.S.-led coalition fighting IS in Iraq and Syria.

The statement echoed claims in other recent attacks in France and neighboring Germany. It repeated its threat to Western "crusaders."

The RAID special intervention force carried out a search for possible explosives in or around the church.

"The investigations are ongoing. There are still unknowns," Brandet said. "There are dogs, explosive detectors and bomb disposal services" at the church outside Rouen.

A nun who was in the church said the priest was forced to the ground before his throat was slit. The nun, identified as Sister Danielle, told BFM television: "They forced him to his knees. He wanted to defend himself. And that's when the tragedy happened."

She said the attackers recorded themselves. "They did a sort of sermon around the altar, in Arabic. It's a horror"

"I cry out to God, with all men of good will. And I invite all non-believers to unite with this cry," Lebrun wrote in a statement from Krakow, Poland. "The Catholic Church has no other arms besides prayer and fraternity between men."

The priest "was always ready to help," said Rouen diocese official Philippe Mahut. He said Hamel had been at the church for the past decade.

"Sometimes he was running all around, and his desire was to spread a message for which he consecrated his life," Mahut said in an interview with AP.

"And he certainly didn't think that consecrating his life would mean for him to die while celebrating a Mass, which is a message of love."

French President Francois Hollande, arriving on the scene, called it a "vile terrorist attack" and one more sign that France is at war with the Islamic State group, which has claimed a string of attacks on France plus two in Germany.

"We must lead this war with all our means," he said, adding that he was calling a meeting on Wednesday of representatives of all religions.

He expressed solidarity with local Catholics, saying "they have been terribly hit by the killing of the parish priest by two terrorists claiming to belong to Daesh. I have met with the family of the priest."

The town mayor, Hubert Wulfranc, in tears, denounced the "barbarism" and, breaking down, pleaded, "Let us together be the last to cry."

A police official said one of the attackers had been turned back after trying to go to Syria. The official, who spoke on condition of anonymity to reveal details of the investigation, said the man was under police supervision and wore an electronic bracelet to monitor his movements.

Mohammed Karabila, head of the Regional Council of the Muslim Faith for Haute-Normandie, said French security services knew the name of one of the attackers.

"The person who committed this odious act is known and he has been followed by the police for at least 1 1/2 years. He went to Turkey and security services were alerted after this," he told The Associated Press by phone. He refused to divulge man's name and had no information on the second attacker.

The pope condemned the attack in the strongest terms. The Vatican spokesman, the Rev. Federico Lombardi, said in a statement that Pope Francis expressed his "pain and horror for this absurd violence, with the strongest condemnation for every form of hatred and prayer for those affected."

France is on high alert and under a state of emergency after an attack in the southern city of Nice on Bastille Day — July 14 — that killed 84 people that was claimed by the Islamic State group, as well as a series of attacks last year that killed 147 others around Paris.

Islamic State extremists have urged followers to attack French churches and the group is believed to have planned at least one church attack earlier.

The attack once again demonstrates the challenge of combating the threat. French authorities increased security at churches, synagogues, mosques and other places of worship after attacks in Paris last year, but ensuring constant, blanket security is difficult in a country with a church in every town and village.

In April 2015, an Algerian student who was arrested after shooting himself in the leg was found with heavy weapons, bulletproof vests and documents linked to Islamic State. He is charged with killing a young woman inside her car the same day. According to French authorities, the suspect, Sid Ahmed Ghlam, was sent by the Belgian Abdelhamid Abaaoud to attack a church in Villejuif, just outside of Paris.

A cell directed by Abaaoud later carried out the Nov. 13 attacks in Paris that left 130 people dead and the March 22 attacks in Brussels that killed 32 people.

This version corrects the name of the town to Saint-Etienne-du-Rouvray.