In an unprecedented move, the Pima County Board of Supervisors voted unanimously to remove Pima County Attorney Barbara Lawall as legal counsel for RICO expenditures.

This follows a KGUN9 investigation into questionable spending practices in the County Attorney's Office.

RICO dollars are public funds used to help fight crime.  But the monies have been misused in Pima County for decades as we've seen with the money laundering case in the Sheriff's Department.

Barbara LaWall is the board's legal counsel for all matters, but because of a new more stringent law the board now has oversight over the County Attorney's RICO expenditures.

LaWall has been issuing advice on the new RICO protocols, but an Arizona judge told us that's a conflict of interest and the board should strip that power away from Barbara LaWall.

And that's exactly what the board did.

The Supervisors voted to use RICO funds to hire outside legal counsel to review the County Attorney's RICO spending.

Chair Sharon Bronson says the board is considering hiring the same legal counsel, Arthur Eaves, "to work with not only the Maricopa and Pima County board, but perhaps the other 13 counties so we get consistency when it comes to the enforcement of RICO laws."

In an interview with KGUN9, Protem Judge Rick Romley cautioned the board about its new oversight responsibilities. "If they don't do it right and something goes wrong, they're going to be blamed," he said.

"And frankly, it scares the hell out of me," said supervisor Steve Christy during an Oct. board meeting.

LaWall has pushed back on the board's request for an audit of past RICO expenditures, but it was a recent emergency RICO spending request that pushed Bronson over the edge.

LaWall sent several victims advocates to Las Vegas following the recent mass shooting. She claimed the Nevada Attorney General asked for the help, but when Bronson wanted the County Attorney to prove it, LaWall refused.

She told the board, "That was privileged. That it was not within our purview. So that's a little concerning because we're not asking her how she should spend the money, we're just asking her for some documentation."

County Administrator Chuck Huckleberry sided with Bronson noting it was a reasonable request asking Lawall to prove it.

It would seem simple verification of this request would be reasonable and would eliminate any speculation over why these individuals were sent to Las Vegas using Anti-Racketeering Funds. I would appreciate receiving this verification.

Bronson learned this past weekend that LaWall waived that privilege when she touted the group's trip to Las Vegas on a FB post. 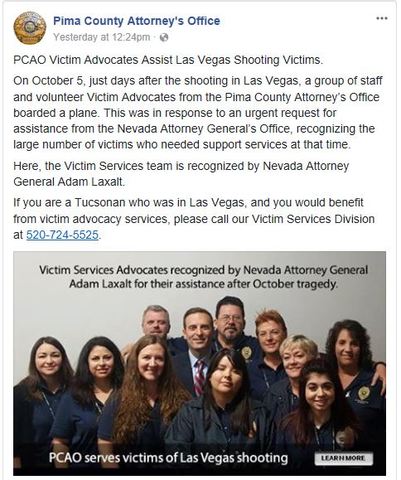 Also posted -- a letter from the Nevada AG thanking LaWall for her help a few weeks after the board asked for proof the AG sought emergency assistance from Pima County.

Bronson says the board will first vet the legal counsel hired by Maricopa County.

"If I had any druthers, I would like to see (expenditures) all reviewed at least initially, but I think the board needs to decide that in the future."