The first tunnel was found near the Raul Hector Castro Port of entry Wednesday morning.

According to U.S. Customs and Border Protection, the tunnel showed no signs of recent use and was collapsed about 25 feet from its opening.

The second tunnel was discovered near Naco on Friday when an employee from a construction team was clearing old border fencing. The incomplete tunnel was 15 feet deep and 4 feet from the international boundary fence. 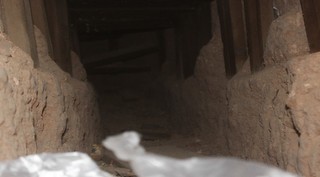 Both tunnels will be filled with concrete.