Man claimed child was possessed by a 'demon' 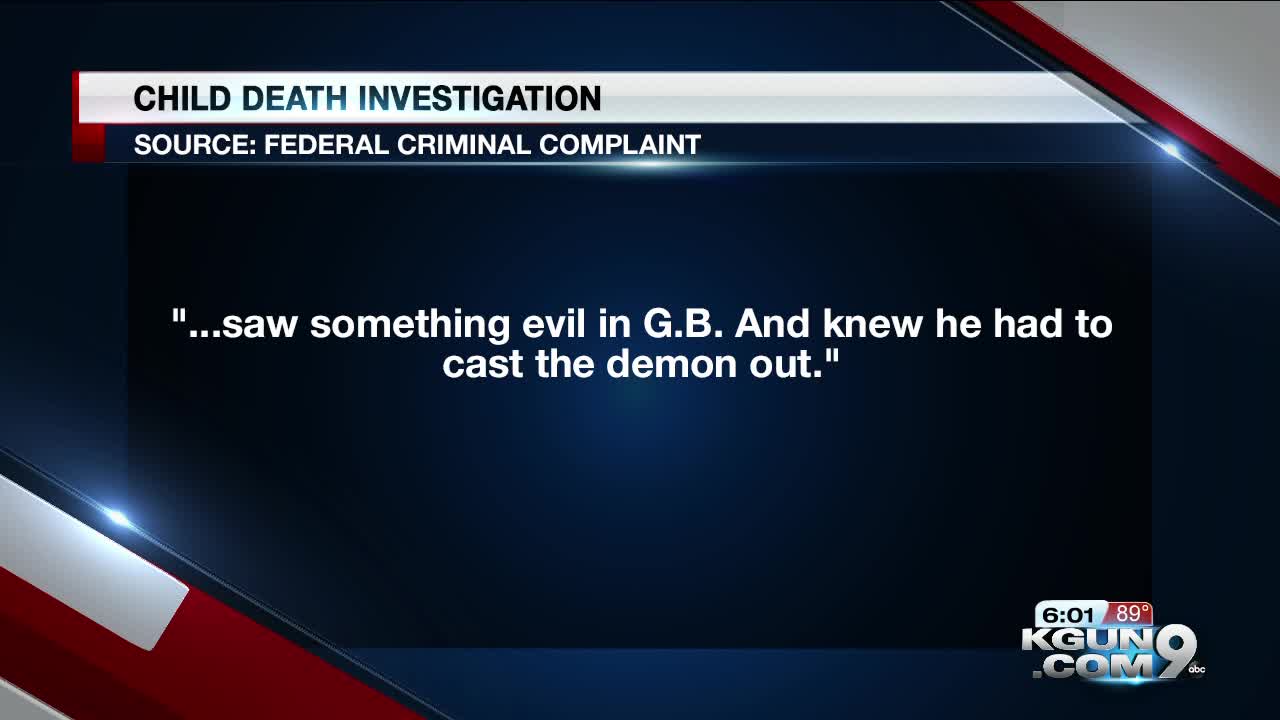 FBI: Suspect claimed to be driving out demons

TUCSON, Ariz. -- A Tucson man is facing federal murder charges after investigators say he poured hot water down a 6-year-old's throat, claiming the boy was possessed by a "demon."

Pablo Martinez, 31, is charged with killing the boy "with malice aforethought and premeditation."

According to the criminal complaint, officers from the Pascua Yaqui Police Department were called to a home on South Yoem Bo Oh on the reservation at around 4:30 p.m. Thursday. In the front of the home, they found Romelia Martinez and Pablo.

Police first found the boy inside the home, naked and tucked into bed. He wasn't breathing.

The boy was rushed to the hospital but was pronounced dead at around 5:30 p.m., the criminal complaint says.

In later questioning by the FBI, Pablo Martinez said he had noticed the boy had "a demon inside of him," within the last week. While he was giving the boy a bath on Thursday night, he said he "saw something evil," inside of the boy and "knew he had to cast the demon out." He then told investigators he held the boy under the faucet of hot water for five to 10 minutes.

Romelia Martinez told investigators it was around that time that she heard a gurgling sound coming from the bathroom. When she tried to get in, the door was locked. She managed to unlock the door and saw Pablo holding the boy's head under the faucet, and she said she screamed at him to stop. Romelia grabbed her phone and called 911, then saw Pablo pour cold water over the boy and attempt CPR.

The hospital later determined the boy had burns over 15 percent of his body including his forearms, elbows and head, according to the criminal complaint.

When officers first arrived at the scene and asked the two what happened, Romelia reportedly told police "he can tell you." Pablo told the police that they wouldn't understand because they "were not in the right mindset or belief." As police continued questioning him, Pablo eventually said "something to the effect of 'I did it,'" the criminal complaint says.

The FBI spoke to tribal enrollment for Pascua Yaqui, who confirmed Romelia Martinez is a member of the tribe and Pablo Martinez is not.