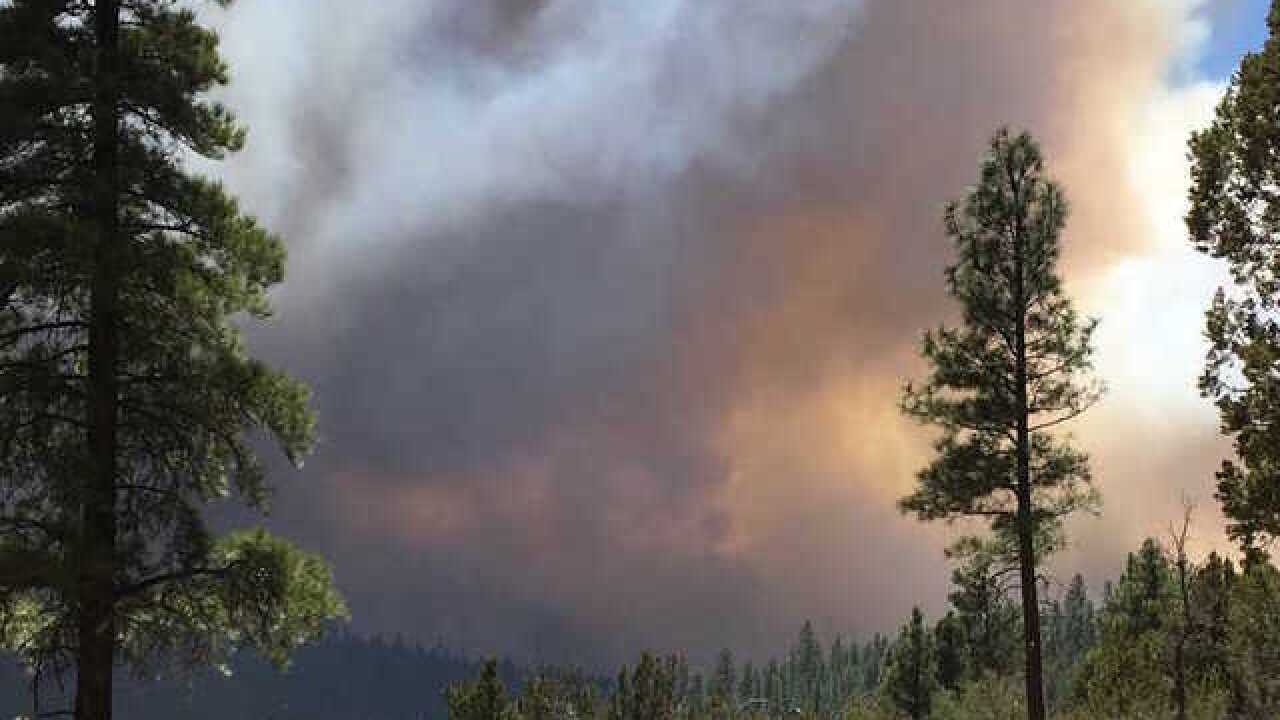 Copyright 2018 Scripps Media, Inc. All rights reserved. This material may not be published, broadcast, rewritten, or redistributed.
<p>A raging wildfire in north-central Arizona continues to grow and has burned an unknown number of structures.</p>

The Tinder Fire continues to burn near the Blue Ridge Reservoir in northern Arizona and has grown to more than 11,400 acres.

PHOTOS: Latest images from the Tinder Fire in northern Arizona

EVACUATION INFORMATION: According to Coconino County officials, evacuations were ordered Sunday by the Coconino County Sheriff's Office for affected communities north, east and west of Highway 87, including Moqui Ranchettes, all of Starlight Pines, Clear Creek (except 1 and 2), all of Timber Ranch, all of Tamarron, Pine Canyon, Blue Ridge Estates, Ponderosa Pines, and Mogollon Ranches.

The evacuation will be in effect until further notice, deputies will stay in the area to provide 24-hour security.

It is estimated that 600 people have evacuated from the 1,000 homes in the impacted area.

Officials are expected to notify residents who have lost structures in the fire on Tuesday.

MAP: See where the Tinder Fire is burning

SUMMARY: The fire has burned an estimated 11,420 acres and is burning 1.5 miles northeast of Blue Ridge Reservoir. Structures have also been lost in the fire, according to the Coconino National Forest.

Early estimates from Coconino County estimate that between 20 to 30 structures have burned. It is unknown if the structures are homes or outbuildings. Officials believe some homes burned east of HIghway 87.

A total of 1,000 structures are being threatened by the Tinder Fire, according to officials.

Increased cloud coverage on Monday helped limit fire spread. No additional fire growth occurred within local subdivisions or on the north end of the fire. The east flank was the most active on Monday.

An approaching storm will result in strong winds on Tuesday. A chance of rain begins to increase over the next few days.

Approximately 559 personnel, including 15 crews, 6 helicopters, 40 engines, 3 dozers, and 10 watertenders are fighting the blaze.

According to fire officials, they have found the cause to be an abandoned illegal campfire during Stage 1 fire restrictions.

The fire was reported by the Moqui Tower lookout before noon on April 27 and started near Forest Road 95, 1.5 miles east of C.C. Cragin Reservoir.

Anyone with information that could assist in the investigation is asked to call Forest Service Law Enforcement at (928) 527-3511.

An evacuation site has been set up at Twin Arrows Navajo Casino Resort, 22181 Resort Blvd, Flagstaff, AZ 86004. Small animals are being evacuated to this site. The original site was at Winslow Junior High, but was later moved due to smoke in the area.

Governor Doug Ducey declared a state of emergency Monday in response to the fire.

The declaration allows for additional state resources for response efforts, according to officials.

"I’m issuing today’s declaration to ensure that they have the necessary resources to protect the lives, pets and property of Arizonans impacted by this fire. We will continue to coordinate with state and local emergency response officials," Governor Ducey said in a news release.