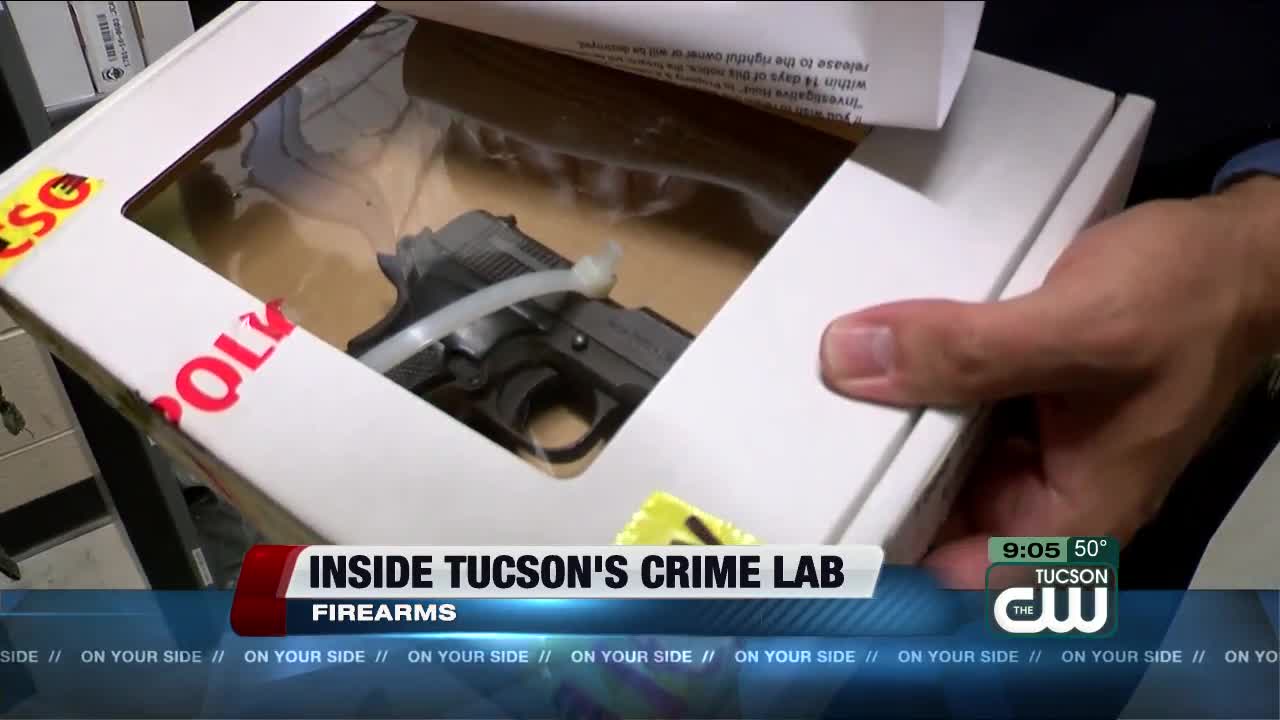 TUCSON, Ariz. — KGUN 9 is taking a taking a closer look at the Tucson police crime lab. In our 7-part series we will examine how crimes are investigated from start to finish. In the first installment, we talk to firearm experts about how they process evidence obtained from crime scenes.

When shots are fired and a crime is committed in the city of Tucson, police are called to secure and investigate the scene. Crime scene specialists like Ed Arnaud are called out to process fingerprints, DNA and more. Arnaud loads up his work van and travels to the scene. He get a brief from investigators and starts the evidence collection process for detectives.

"We document the scene with photographs, we search for and collect latent prints and DNA evidence -- it can be touch DNA or other types of DNA evidence," Arnaud said

Surveillance video along with other evidence goes to a secured evidence lockup. That's where evidence is logged, tagged, numbered and stored. Right now the Tucson Police Department has over 700,000 pieces of evidence in storage at their facility.

"It gets stored in evidence until a detective or county attorney, prosecutor, requests that the evidence be analyzed by a crime lab and they will request it from evidence and it gets transported to them," Arnaud said.

Bill Brantley is the evidence superintendent, he says that all firearms are stored in one of three high security vaults at their facility. The guns are zip tied and secured.

Once detectives get moving on a case they call on firearms examiner Thomas Murphy to find out if the gun fits the crime.

"I'm testing them to make sure that they work and testing them to make sure they don't have any malfunctions that can explain why a gun went off. I'm going to take that gun and compare it to cartridge cases or other ammunition components that are recovered at a crime scene to identify if a particular fire arm fired those bullets and cartridge cases or didn't," Murphy said

The guns are tested at both short and long range. Murphy says the evidence can come from anything ranging from a car, tree, house or even a person.

Experts say the key is to find unique markers that identify a certain gun. There are also some challenges with it comes to working with guns.

Once testing is done the investigation can potentially get wrapped up after Murphy is called to testify and confirm his findings. In some cases testing can be done in less than 45 minutes.

The evidence is sent back to storage until the case is closed. It can be returned to owners, auctioned off or destroyed.