Proposed sales tax increase in Tucson: how would the money be spent?

Posted at 10:41 PM, Jan 24, 2017
TUCSON (KGUN9-TV) -- On any given day you'll see more than a dozen fire engines at the Tucson Fire Maintenance facility on Ajo Way and Park.
The eight mechanics make repairs to what Captain Barrett Baker calls an aging fleet. While the engines may look nice, Baker says most of TFD's vehicles have well over 100,000 miles on them and are more than 10 years old.
"After that point in time the components start to fail so your transmissions, your pumps, various thing on the engine," Baker said. "If those fail they are much more expensive to fix as well as the reliability and 70% of the pumpers on the fleet are passed that replacement threshold. Ninety-percent of the paramedic trucks are passed that threshold."
If Tucson voters approve the proposed temporary half-cent sales tax increase in May, that could mean 47 new fire engines and other special vehicles for Tucson Fire. That would also include 90 non-specialized units.
On Tuesday the Tucson City Council approved plans for the sales tax money. Over the span of five years an estimated $100 million would go to road repairs, and $150 million would go to public safety improvements.
The map below provided by the city shows which major roads would see repairs: 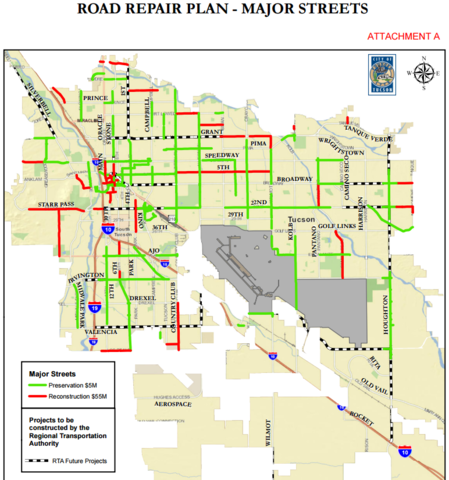 On the public safety side, the Tucson Police department would receive a number of improvements including the following:

Lane Mandle with the city of Tucson says the tax would apply to retail items and not on things like gas or groceries. If you were to by a television for $100, the tax would mean an extra $.50.

If the proposal is passed it would go into effect in July.