More than 160 evacuated because of Sawmill Fire

More than 160 people have been evacuated from different locations affected by the Sawmill Fire.

More than 160 people have been evacuated from different locations affected by the Sawmill Fire.

The Sawmill Fire began just after 11 on Sunday morning and has since burned about 40,350 acres and is 20 percent contained.

The #SawmillFire is now 20% contained. Crews are working extremely hard and making progress.

Authorities have confirmed the fire is human caused.

The fire sparked 10 miles southeast of Green Valley and has spread east over the Santa Rita Mountains and is north of Sonoita. 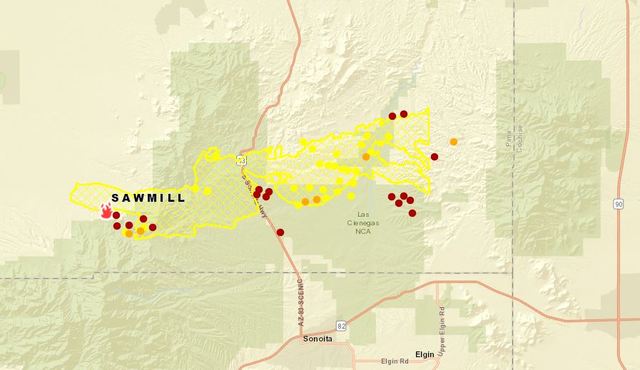 The fire is also burning south of J6 and Mescal.

Cochise County deputies say Rain Valley is the primary concern, while J6 and Mescal are of secondary concern and are under pre-evacuation notices.

More communities are on standby to leave their homes at any moment.

The American Red Cross has opened two shelters to house the evacuees. One is located at the Sonoita Bible Church at 3174 Highway 83 and the other is at the SE Regional Park Shooting Range at 11296 S. Harrison Road

Some evacuees have been allowed back into their homes and are relieved but have not let their guard down.

Bryce Reichardt's home along Highway 83 is still standing thanks to air tankers spot-on slurry drop. His home was coated in pink but saved from the damage.

"To tell you the truth, it was kind of an adventure to watch that thing, to see it race over the hill to race down out of here while an aerial tanker is dropping slurry on our house," Reichardt said. 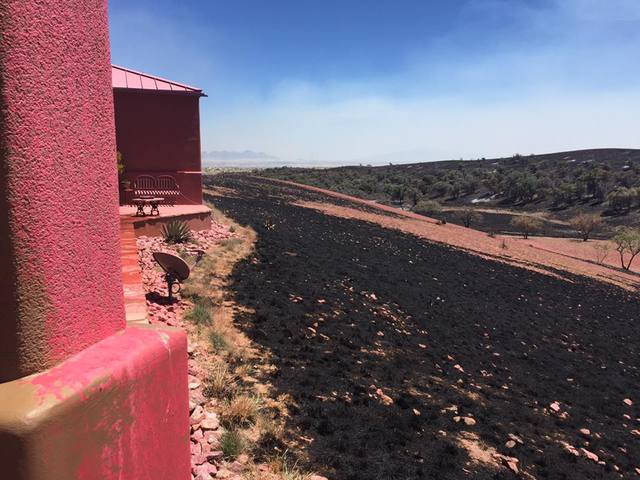 Firefighters from Sonoita showed up today unannounced and without asking to wash the pink retardant away.

"They're fantastic people, you need an ambulance they're up here a heartbeat. They know you by name. It's just a different lifestyle out here," Reichardt said.

Lee Freyenhagen returned home on Wednesday to his home along Highway 83 after being evacuated on Monday when the fire got close.

Wednesday afternoon he was warned again that the wind could push the flames toward his home.

"My wife and I were just talking about how good it is to be home and now it's getting a little scary again," Freyenhagen said.

Wunder was evacuated from his Green Valley home on Monday.

He said being on this side of the situation was a "humbling" experience. He and his family members, including young children, were forced to leave their home, as the fire was racing in their direction.

"As we were evacuating, the fire jumped the road right as my family was crossing," Wunder said. "They were driving away and literally coming over the back of the vehicles for them as they were beginning to drive off the ranch."

His family is now safe and staying in Tucson.

"When you see that go over the back of one of your personal vehicles, it can be a humbling experience. And I know, speaking with my wife, they're doing great now. But it was certainly terrifying and humbling to them as well."

Wunder expressed how thankful he is for everyone fighting this fire.

"I'm so proud of those guys. They work so hard. But they don't just work hard here," he said. "They do it each and every day. There's incidents that are occurring all over our state and the country where people are going to work like this every day and, I'm just proud of what they do. A wonderful job in really adverse conditions. I'm lucky that they were here today."