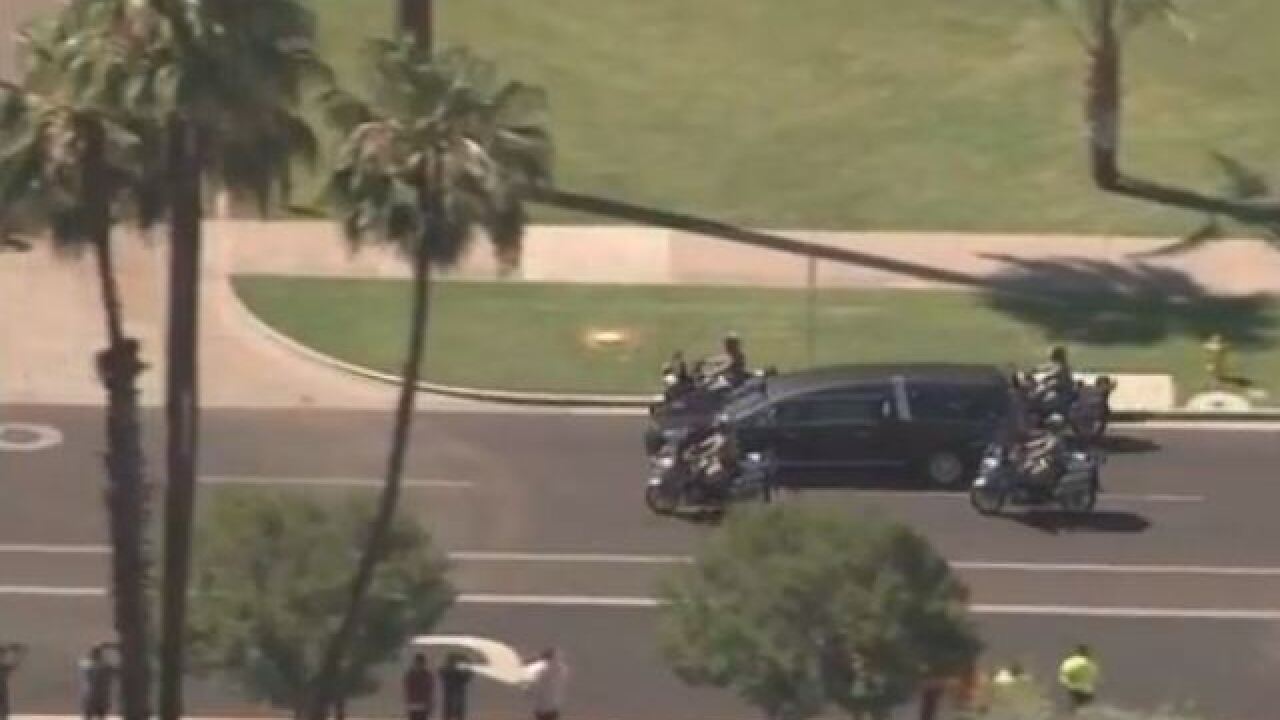 Copyright 2018 Scripps Media, Inc. All rights reserved. This material may not be published, broadcast, rewritten, or redistributed.
Villarreal, Phil
<p>With Arizona State troopers as an escort, John McCain's hearse rolled up to the Capitol as veterans and servicemen and woman lined the street to salute his long years of service.</p>

With Arizona State troopers as an escort, John McCain's hearse rolled up to the Capitol as veterans and servicemen and woman lined the street to salute his long years of service.

McCain's son Jack followed the McCain family tradition of a life in the Navy he saluted as an honor guard of Arizona National Guardsmen carried the casket to the Capitol.

There, under the dome, friends who McCain inspired to service spoke of how he served our country.

"I've been with Senator McCain all around the world. I will tell you that he had better instincts about how and when and where to assert American power than any other leader that I've known," former Sen. John Kyl said. "He'd been to more countries, knew more foreign leaders and had a better grasp of history than any other American official, including our Secretaries of State. One illustration that we are all familiar with is when others were looking into Vladimir Putin's eyes with an eye of understating him and reaching accommodation with him, John of course said I looked into his eyes and saw the KGB."

Governor Doug Ducey recalled a sense of humor with the Senator joking about how his biggest challenge was whether to run for re-election in 2020 when he would have been 84.

"Dying as has been observed 50 years earlier was not in his plan," Ducey said. "John McCain was a fighter and he called on us to fight with him for American values for the ideals and character of a free people for justice and opportunity for all for this blessed and bountiful country."

"Now as we go forward, let us remember thy humble servant with gladness and truthfulness," he said.   "To answer his call to summon the better angels of our nature to see and appreciate the humanity in our opponents and more freely forgive that we might be forgiven. Of this we pray on the name of Jesus Christ, Amen."

There were early birds so dedicated to seeing John McCain lie in state some of them lined up seven hours before the viewing was scheduled to open to the pubic.

Linda Gordon was the first.

"He's worth the wait. He's worth it," she said. "If I could be worthy of being such a person, an American, or human being.. to give your all."

Some traveled long distance to pay their respects. Aida Underwood says she came from Los Angeles.

"Somehow with Senator McCain, probably the one person in Washington who I would be here for," he said. "Somehow I needed to express my appreciation to him and to honor him any way I could."