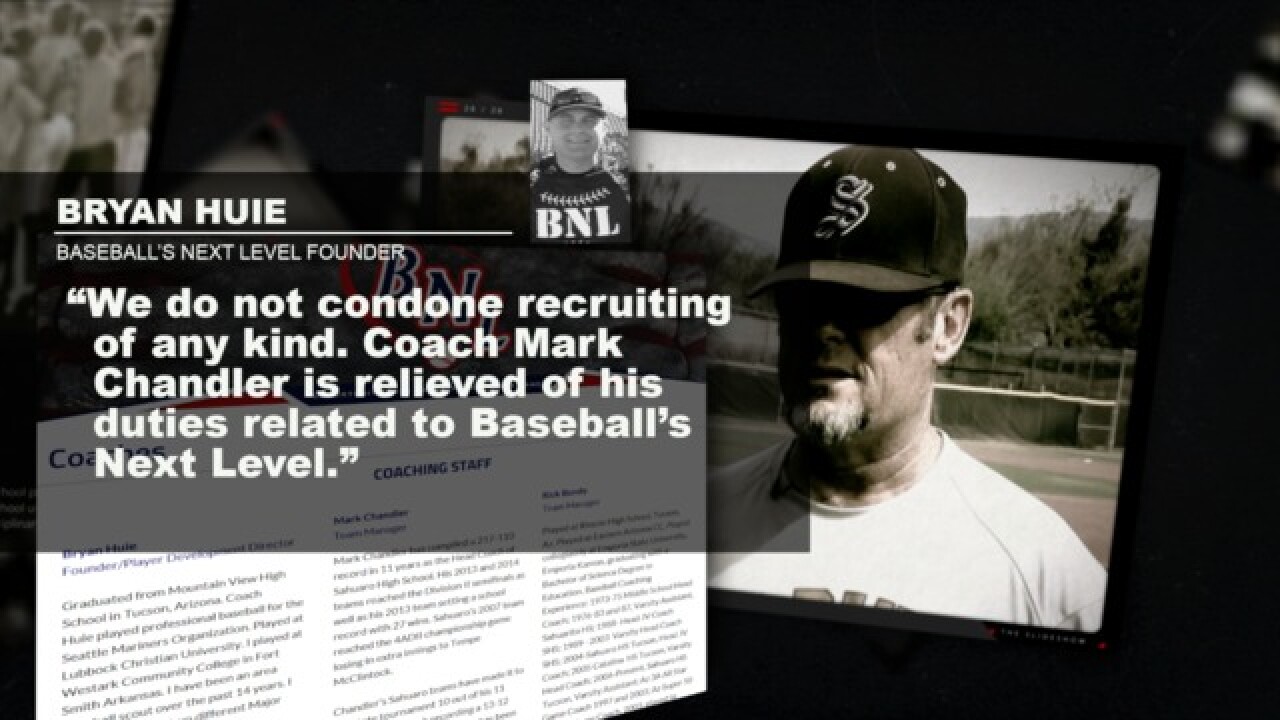 More fallout from the Sabino High School Baseball investigation. This time it centers around the baseball club that head coach Mark Chandler helped manage for years.

The owner of Baseball's Next Level tells us he fired Chandler from the club team. This comes less than a week after the Arizona Interscholastic Association stripped the Sabino High School team of the recent 3-A state championship for violating AIA rules.

Our investigation weeks ago revealed Chandler had a history of AIA violations as head coach of the Sahuaro baseball program. And then came another bombshell revelation -- Trujillo announced Chandler once again violated AIA rules as head coach at Sabino. TUSD investigators found misuse of booster club funds and coaches having prior contact with athletes -- a recruiting violation.

"There were allegedly prior contact violations with students that participated in the Baseball Next Level clinic. We have found this violations to be sustained," said Trujillo.

We reached out to the founder of Baseball's Next Level, Brian Huie, a former Major League player, for an interview. He instead sent a statement that he relieved Chandler from his coaching duties.

Full Statement:
Baseballs Next Level (BNL) prides itself in providing student athletes with an opportunity to play club baseball at the highest level. Our program consist of developing athletes both on and off the baseball field. Over the past three years of operation, we have won multiple championships and as of today, we have sent over 110 student athletes to play at the next level including college and professional baseball. Our players have been given opportunities to play competitively throughout the United States. Some of our athletes have been given scholarships to play at the Division I, Division II, NAIA, and Junior Colleges throughout the country. Some Universities include but not limited to the New Mexico State, University of New Mexico, University of Utah, Texas Tech, Cornell University, University of Arizona, Grand Canyon University, and UNLV just to name a few. We pride ourselves in helping student athletes achieve their baseball goals.

Due to the unforeseen circumstances, Coach Mark Chandler is relieved of his duties related to Baseballs Next Level. BNL will continue with both upcoming Fall and Winter seasons. We will continue to serve our student athletes and our community at the highest level.

Our investigation into this sports controversy continues.