Ryan Lee Gehris is riding his bicycle across America to honor the children of fallen patriots.

Ryan Lee Gehris is riding his bicycle across America to honor the children of fallen patriots.

This weekend, he was in Tucson. He says he made the decision to ride his bike from San Diego to New York because what Gold Star kids go through, hits close to home.

Gehris reflected on the reason behind his passion, his mother. He says, "my mother, losing her father, my grandfather in Vietnam on July 9th, 1965. There were no programs back then, for kids back in those days."

His mother, Pattie Stein, lost her dad when she was 14-years-old. He was killed in the Vietnam War.

She died back in 2011, but he says "her spirit is shining down on me. I'm trying to keep her memory alive. That's why I named my campaign 'Peddling for Pattie'."

War does not end when you leave the battle field, and the effects it has on the families left behind go on for generations, he said.

He is specifically raising money for Children of Fallen Patriots Foundation.

One of his favorite things about the Children of Fallen Patriots Foudation is that it helps Gold Star children get a higher educatoin.

My advocacy for Goldstar families is very personal to me, he said.

His "Pedaling for Pattie" campaign started in Ocean Beach, California and will end it in New York City, with a few stops along the way. 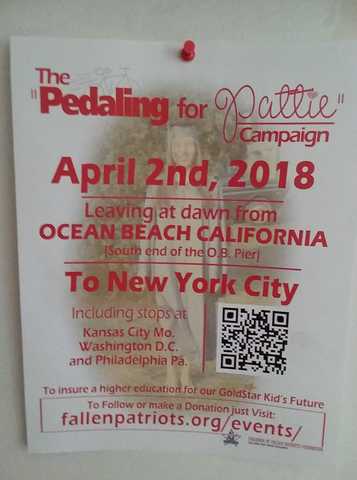