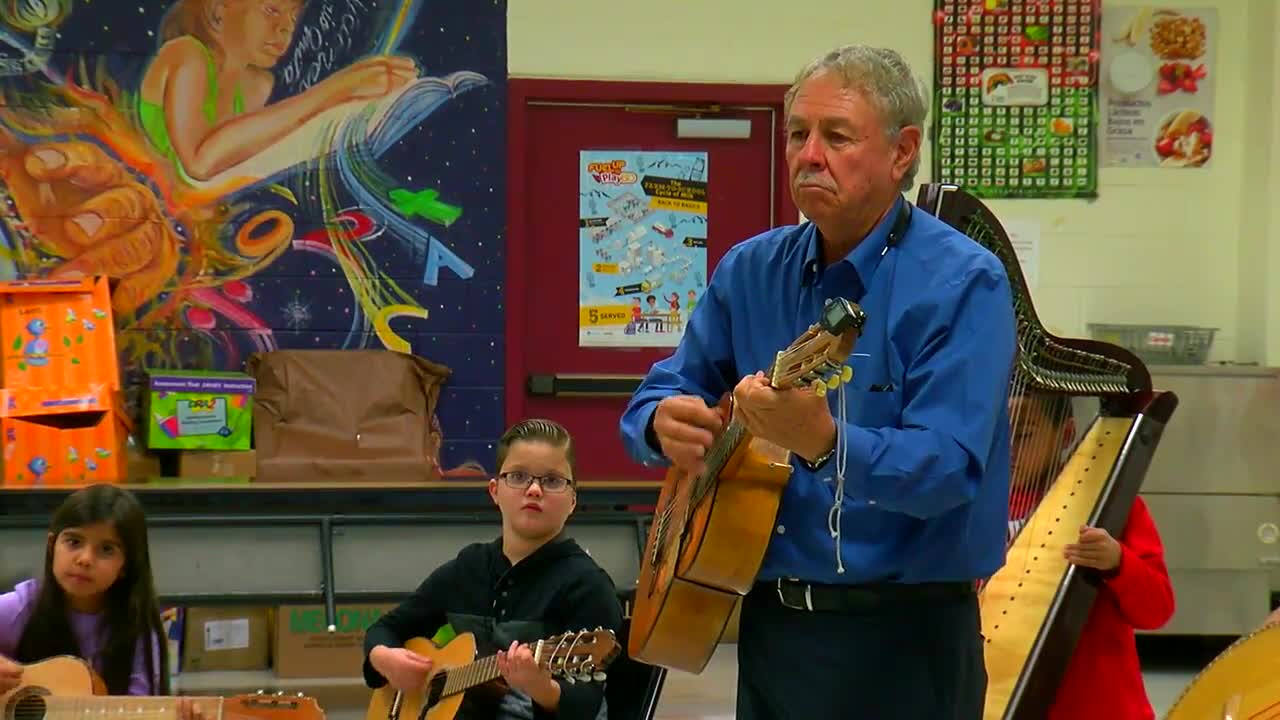 For decades Alfredo Valenzuela has hit all the right notes with students at Davis Bilingual Elementary Magnet School.

When tuning an instrument, Alfredo Valenzuela knows how to get that perfect tone.

For decades he's hit all the right notes with students at Davis Bilingual Elementary Magnet School.

"Even though my Tata is retired, he's literally in his back office 24/7 fixing instruments so kids don't have to pay for instruments here," said his granddaughter, Araceli Valenzuela.

Valenzuela, also known as "Dr. V," retired about seven years ago, but it's hard to miss him in the campus cafeteria. He taught at Davis for about 40 years and founded the mariachi program. It all started when he gave guitar lessons to small groups of students.

"I thought, 'why don't we start violin and trumpet and see if we can do a little more,'" Dr. V said. "So the mariachi started and it just took off, you know."

His love of music began when he was a child. Dr. V grew up in Klondyke, a rural ranching community in Southern Arizona.

The nearest town was 50 miles away, but he was close to aunts and uncles who were talented musicians.

"They would get together at night and over there it was so quiet, so beautiful with the moon shining and everything," Dr. V said. "And the people would start with the music and it just got into my heart, you know."

While he worked on his family's ranch, a young Dr. V saved enough money to buy a guitar from a Sears catalog. And as they say... the rest is history!

Dr. V's passion has been passed down for generations. His son, Jaime, son took over for him at Davis. His son Rudy and daughter Myrna Valenzuela teach at Roskruge Bilingual K-8 School.

Dr. V's granddaughter Araceli is also a music teacher at Davis. She started playing the violin when she was 3.

"I've grown so many close relationships and friendships through mariachi," she said. "I think all the friendships that have stayed throughout my whole life are from mariachi."

The Valenzuela family also performs in church together.

"At family gatherings there's always a jam session," Araceli said. "By the end of the night everyone has their instrument out and we're singing, and that's kind of the way we bond and we come together."

They start young too! On a Wednesday afternoon just before Christmas, mariachi students from Davis performed at a nursing facility in town -- including Dr. V's grandchildren.

Dr. V is always there to set up early and tune instruments for the kids. He claims he's no good at playing, and it's patience that led to a successful teaching career.

It's one of the many lessons hung from the family tree.

"One thing that he always instilled in my mind is faith," Araceli said. "If you have faith in God then you have everything."

"And when it comes to kids -- we don't know their situation," she said. "We don't know what they are dealing with at home. Maybe school is their safe space, and that's what we like music to be for them."

Dr. V also believes music has a positive impact on young people, and over the years he says many of his students have gone on to be professional musicians.

There is an effort underway to build a statue of Dr. V in front of Davis.

He is called Dr. V because he was given an honorary doctorate degree from the University of Arizona.