Ryan Bono, 36, of Oro Valley, was taken into custody by special agents with U.S. Immigration and Customs Enforcement’s Homeland Security Investigations, according to a media release.

Bono is charged in a criminal complaint with one count of distributing child pornography.

"I wouldn't expect that coming from him," Siqueiros said. "Such a nice man, caring. But, it is what it is."

Bono, a language arts teacher at Math and Science Success Academy and a youth soccer coach, is currently in federal custody held without bond, according to a media release from U.S. Immigration and Customs Enforcement.

Evidence does not indicate any of the youth Bono taught or coached were victims.

The following letter was given to all junior high students at Math and Science Success Academy: 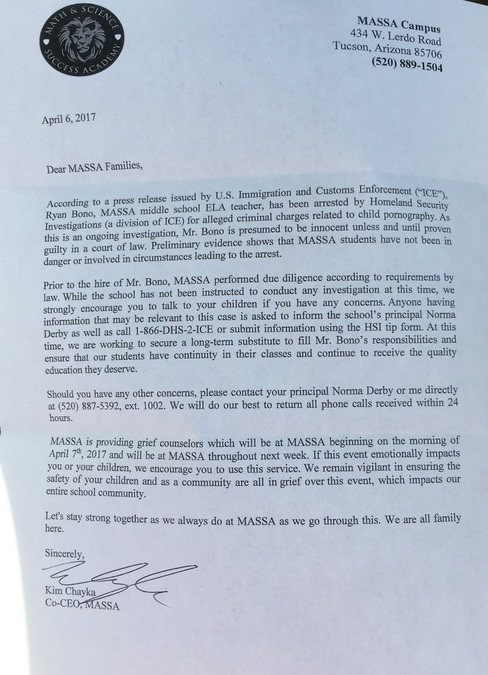 Heather Banks, a mother of three children at the school, says she initially wasn't very pleased with how the school handled it. She explained she wished they told all students and families right away, instead of just telling the junior high kids and families. However, after attending a Q & A session Thursday night -- her opinion changed.

"It's a really tough spot. I love this school, it's a great school," she said. "The principal and the assistant principal are absolutely amazing here, so I'm sure they handled it the way they thought was best."

Our entire school family is grieving through this process. Thankfully, preliminary evidence shows that MASSA students have not been in danger or involved in circumstances leading to the arrest. We follow all laws for hiring of school staff including obtaining fingerprint clearance cards from the Department of Public Safety and even go beyond with background and reference checks to ensure the safety of students. In this case in particular, the employee's fingerprint clearance card was in fact valid even at the time of the arrest.  The employee has been placed on administrative leave pending the outcome of the investigation. We remain united and committed to the safety of our students and our focus on providing families an excellent education.

Siqueiros says he doesn't want people to think of his school in a negative light because of this alleged crimes one teacher committed. He explained he takes pride in his school's good reputation.

If Bono is convicted, he could face up to 20 years in a federal prison.

Anyone having information that may be relevant to this case is asked to call 866-DHS-2-ICE or submit information using the HSI tip form.