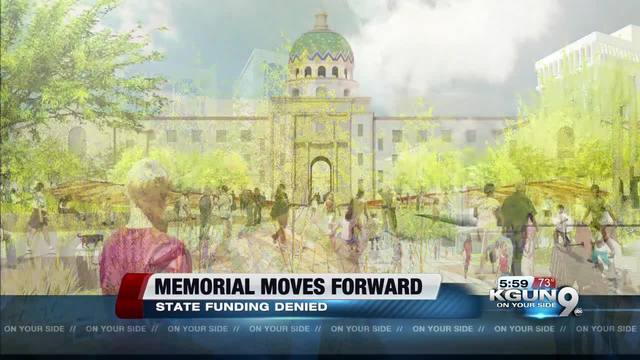 Members of the January 8th Memorial Foundation are pressing on with their mission to build a permanent memorial in downtown Tucson.

An effort to obtain state money to help build the park didn't get legislative approval. Now, they're asking for community donations to help reach their fundraising goal.

“This is not only our story and not only our memorial,” said Ken Dorushka, who survived the shooting after a bullet him in in the arm. “This is a memorial for all of you, all of Tucson, all of southern Arizona this is your memorial because this tells the story of what really happened that day.”

Dorushka and others spoke during a press conference Monday morning at the Pima County Administration Building.

He and other members of the foundation say they were surprised and disappointed when a bill that would have provided $2.5 million dollars for the memorial’s construction failed to win legislative approval. Some believe political motivations killed the bill.

“It’s not political, but that's what they made it. And as a result people got skittish over on the Senate side and the bill never got heard,” said Ron Barber, who survived a gunshot to the leg during the shooting. Barber later was elected to the U.S. House of Representatives vacated by Rep. Gabrielle Giffords after she resigned from congress.

The Arizona House of Representatives passed the bill, HB2436, with bipartisan support. In the Senate the bill was assigned to the Committee on Natural Resources, Energy, and Water, chaired by Sen. Gail Griffin, from Hereford. Griffin never scheduled the bill for a hearing.

When KGUN 9 On Your Side asked her why, she sent a prepared statement, saying in part:

“The January 8th, 2011 shooting in Tucson was a horrific and tragic event, and I am not opposed to this memorial. The decision not to hear HB 2436 was in no way a partisan or a political stance.”

The statement continued, “We are still recovering from the economic downturn. We are trying to be responsible to the hard working taxpayers, their money and make the best decisions we can.
The Tucson January 8th memorial can move forward with private contributions and donations.”

Kasnoff said the foundation still plans to proceed with the memorial planning process, and is still hopeful the group can break ground on the project later this year or in early 2018.