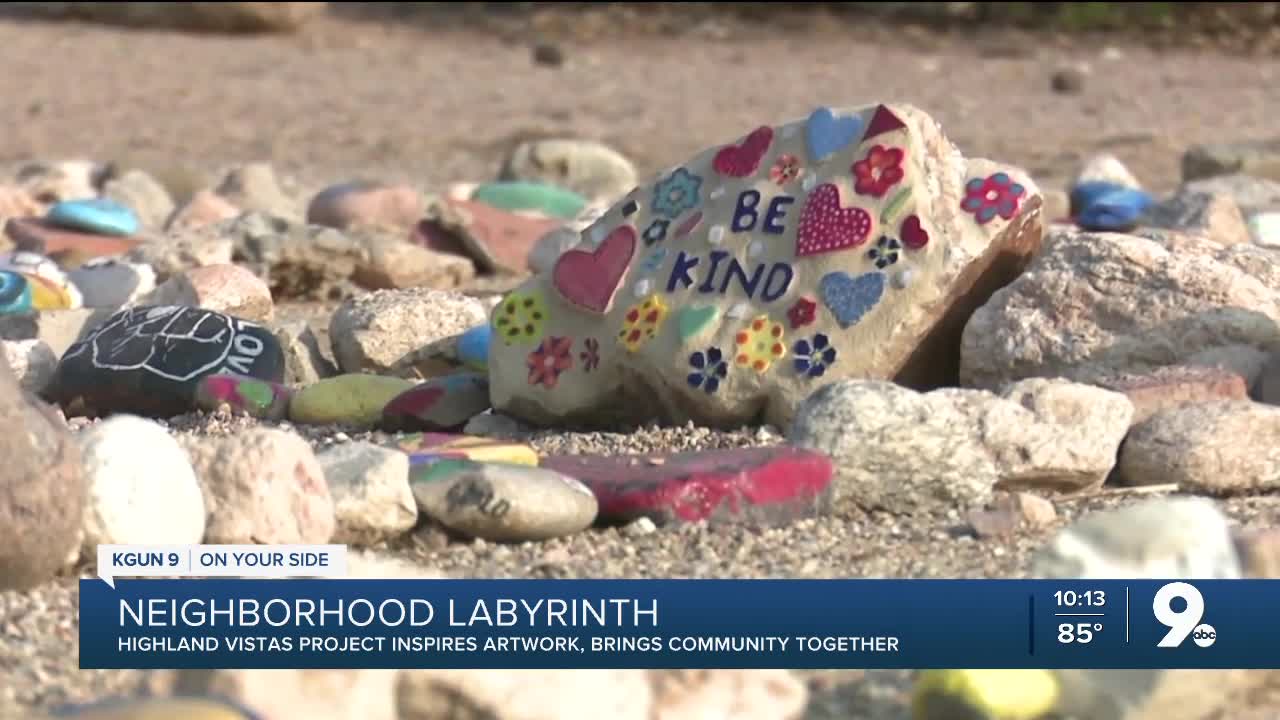 TUCSON, Ariz. -- The Highland Vista neighborhood in Tucson is coming together in the middle of a pandemic through artistic creation.

A seven circuit labyrinth is giving people hope, inspiring creativity, and bringing out the best in a community during a time of uncertainty.

Eduardo Atjian II created the piece -- the community labyrinth. He was born and raised in Tucson, and lived in California until the pandemic hit.

“As devastating as it was for everybody, it kind of presented an opportunity for me to be with my family...which I hadn’t been in Tucson for 7 years,” he told KGUN9.

Spending time at home got his creative juices flowing.

“I always saw this area of the park and I always imagined like man this park needs something...like some life,” he said while looking over at where the labyrinth is currently located.

So, the community labyrinth was born. The initial idea was simple -- to have people walk the path and reflect.

“And within days I started seeing painted rocks all around the neighborhood. Just like little messages. Like finger-painted by little kids. I’m like something’s going on here,” he told KGUN9.

This inspired him to change the rules and make a community labyrinth.

“Take a rock, bring a rock, paint a rock, leave the rock, and enjoy it,” said Atjian.

Five simple rules, he says, that make all the difference.

Abby Green and her son Ezra live in the Highland Vista neighborhood. When they heard about the labyrinth, they immediately wanted to take part.

“And every single night it felt like you could come and find new rocks that were added in just within 24 hours,” said Abby.

This has inspired rock installations and labyrinths in other communities.

Palo Verde Neighborhood created their own labyrinth. They also donated a wooden sign detailing the ‘rules of the labyrinth’ to go in front of the Highland Vista neighborhood labyrinth. This inspired Atjian to then create a wishing tree.

“There’s a wish over there that made a huge impact on me. It says ‘Peace for my dad. Passed away today 09.04.2020.’ When I read this. It gave me chills. That’s when I knew this wishing tree was bigger than me. So that just makes me happy, you know, seeing that happen and you know yeah, we’ll see what the future holds,” he said.

Atjian doesn’t know how much longer he will be in Tucson, but plans to make every day count.

His message for folks is to continue to ‘dream, create, explore, and be a part of the story.’