Henderson was beaten to death outside of a club in Greece over the summer less than two months after he graduated from the University of Arizona.

MORE: Arrests made in connection with death of U of A student.

At the vigil at Eller College of Management, purple wristbands were passed out in honor of Bakari. People are encouraged to wear them as they travel and post pictures to the Facebook page Travel with Bakari.

Bakari is described as adventurous, fun-loving and confident. Among the crowd of students at the vigil were Bakari's parents, Jill and Phil Henderson.

Bakari is from Austin, Texas and his parents Jill and Phil Henderson made the trip to Tucson because they say the Wildcat community has been so loving and they wanted to let people know how blessed they feel to have them in their lives.

"It's an emotional thing but you know it's a good thing from just the stories I've been hearing and stuff like that," Phil said. "So it's good, but it's still hard because he's not here with us."

There is a permanent memorial for Bakari just outside of McClelland Hall at the U of A. A legacy paver was placed for him and Christiana Duarte near the building. Duarte was killed in the mass shooting in Las Vegas in early October.

Bakari and Christiana graduated at the same time and were killed within months of each other. 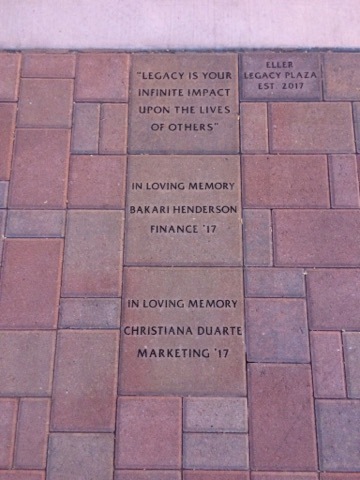 Bakari's parents say they plan to continue the clothing line he was setting up. They also want to create a non-profit in his honor.