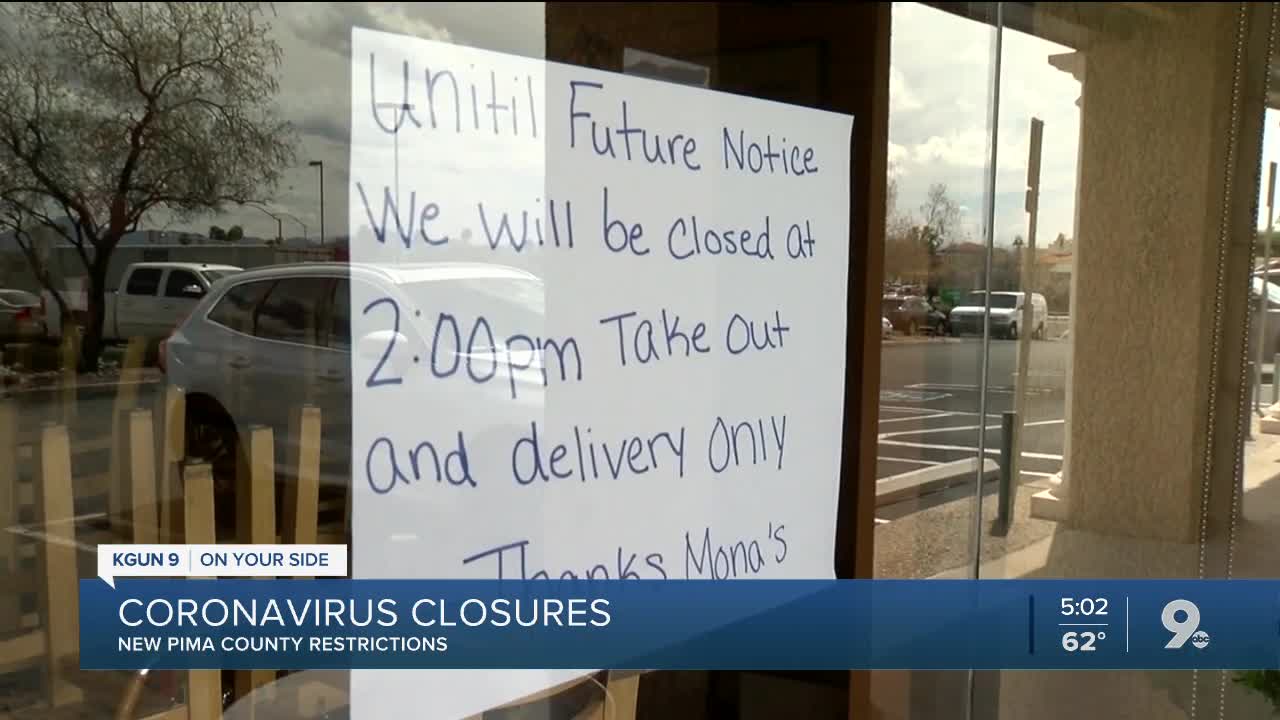 Order on Bars, restaurants and other gathering spots TUCSON, Ariz. - In response to the Coronavirus outbreak Pima County Supervisors ordered the strictest closures of any local jurisdiction.

By a three to two vote Supervisors voted to close effective at 8pm Thursday, restaurants, bars, theaters, gyms and a wide range of other businesses where close person to person interaction is likely. Restaurants can continue to serve customers on a take-out basis only.

Coronavirus has local governments prescribing some harsh medicine and local businesses are figuring out just how to swallow it.

Pima Supervisors called an emergency session to pass restrictions even tighter than closures the City of Tucson enacted Tuesday.

Until March 31st, dine-in is forbidden at restaurants. They can be take-out and delivery only.

Theaters, gyms and a wide range of other businesses where close person to person interaction is likely must close.

Supervisors Ally Miller and Steve Christy worried about impact on business and said some towns had good compliance simply urging businesses to emphasize social distancing and take out.

Christy says, “They still could operate without being prohibited and being shut down thus saving that economic hardship that is bound to prevail."

But Chairman Richard Elias, and Supervisors Ramon Valadez and Sharon Bronson formed a majority that felt tougher, mandatory restrictions are the best way to reduce social contact and disrupt the virus ability to spread.

At Mona's Danish Bakery near Sunrise and Swan, they reduced hours and went take-out only several days ago. Now they're worried about bills coming due.

Owner Steve Hashemi says, “Business is down 40, 50, 60 percent right now. So we have to see what's going to happen the next couple of days."

Nearby, the Bisbee Breakfast Club also cut hours. It's seen dine-in decline and separates the diners who have come in.

Bert Landau just caught lunch there. He told us, he'll miss dining out but understands the need to keep clear of crowds.

“If you have clusters of people you have increased opportunities for transmittable diseases and the social distancing seems to be the only solution since we don't have an antidote for the virus."

And Pima County's Health Director Doctor Bob England told supervisors there may be a need to extend the order that makes the restrictions law.