According to deputy Ryan Inglett, a threat against the school was written on a wall. Deputies swept the school to make sure there was no threat.

The investigation has found that, at no time were students or staff in danger and the student who allegedly wrote the threatening message has been taken into custody by the Pima County Sheriff's Department.

Principal Gerad Ball sent the following message to parents regarding the incident: 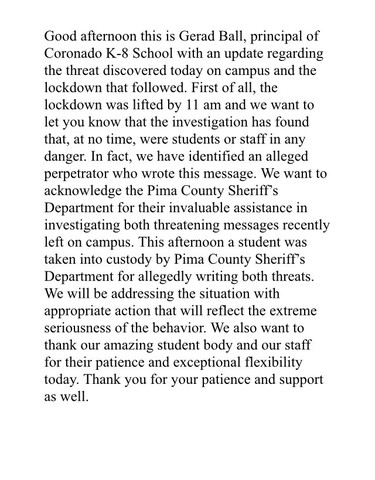 Deputies say at 10 a.m. the school's administration contacted the department's School Resource Officer Unit about a threat written on a bathroom wall.

Detectives then responded to assist school resource officers with the investigation.

Through the investigation they learned that the same student was responsible for a similar threat on August 25 that did not warrant a lockdown.

PCSD says both threats were written to solicit a response from school administration and law enforcement.

A 13-year-old student was found to be responsible and was arrested for hoax and interference/disruption of an educational institution, both felony charges.

PCSD says at no time were students or staff in danger.