Authorities are investigating this fire as arson

The Mt. Lemmon Fire Department battled a cabin fire in the 11000 block of North Grosbeak Lane.

The Mt. Lemmon Fire Department battled a cabin fire in the 11000 block of North Grosbeak Lane.

Deputy Hayes with PCSD said that no one was home at the time of the fire.

Hayes said if this fire had happened in the summer it would have burned down the whole village -  The snow and cold weather prevented the fire from spreading to other homes in the area.

Sean MaGee lives near by the now destroyed cabin and he says, "I saw the smoke coming up the mountain." 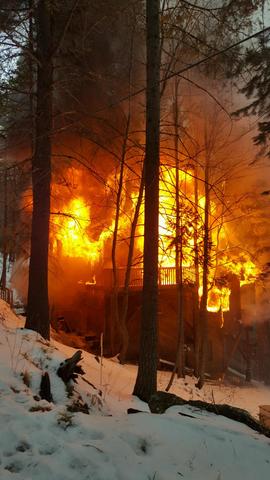 Smoke from the fire could be seen from Catalina Highway, according to some KGUN9 viewers.

No other homes were damaged or evacuated. This fire is still under investigation.