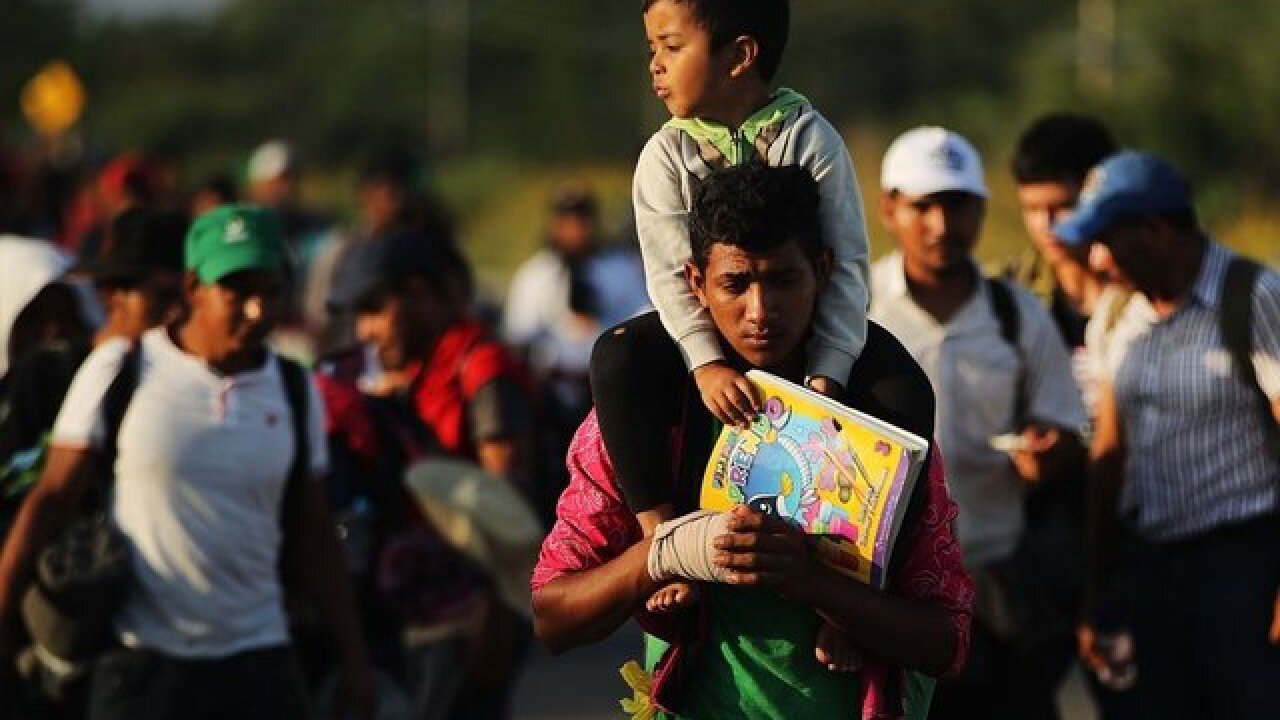 The Trump administration said Thursday it will restrict the ability of those crossing illegally to seek asylum on the southern US border, in a move previewed by the President last week.

The rule becomes effective once a presidential proclamation is issued, which is expected to happen Friday, according to senior administration officials.

The administration announced a new federal rule -- issued by the Department of Homeland Security and the Justice Department -- that will limit eligibility for asylum seekers coming from Mexico, in a call with reporters Thursday afternoon.

The interim rule, which is set to be published in the Federal Register on Friday, states that "if applied to a proclamation suspending the entry of aliens who cross the southern border unlawfully, would bar such aliens from eligibility for asylum and thereby channel inadmissible aliens to ports of entry, where they would be processed in a controlled, orderly and lawful manner."

The rule adds that "aliens who enter prior to the effective date of an applicable proclamation will not be subject to the asylum eligibility bar unless they depart and reenter while the proclamation remains in effect."

The regulation will also amend the screening process for aliens subject to a bar on asylum eligibility, a senior administration official said.

The rule does not specify whom it applies to, but discusses the issue in the context of increasing asylum claims from Central America.

"We do not expect one action" to solve immigration problems, the officials said.

This is just one effort to address the issue and "I would expect we would work on additional measures in the future," one official said.

An official on the call said the Department of Homeland Security has started to work on staffing models to handle asylum claims they will be seeing at legal ports of entry.

A Justice Department official said the rule was signed off by Attorney General Jeff Sessions before he tendered his resignation this week, not the new acting attorney general, Matthew Whitaker.

"US law specifically allows individuals to apply for asylum whether or not they are at a port of entry. It is illegal to circumvent that by agency or presidential decree," said Omar Jadwat, director of the ACLU's Immigrants' Rights Project.

Human Rights First's Eleanor Acer called the new rule "the latest shameful tactic in a years-long campaign to vilify and punish those who seek protection in this country."

"President Trump's scheme violates refugee treaties, and is a convoluted attempt to rewrite the laws enacted by Congress to protect those seeking asylum. This country is more than capable of safely processing asylum seekers to determine who among them have protection claims. Border officers already have extensive tools and resources that allow them to identify any individuals seeking entry who present a danger," Acer added.

There was an effort to finalize the rule in time for the President to sign by Friday morning, before he leaves for Paris, according to a senior administration official.

Trump first revealed plans to take unilateral steps during a rambling and detail-free speech from the White House last week. Warning of a crisis at the southern border, Trump's remarks were viewed as a political stunt days before the midterms.

Since Tuesday's vote -- which saw Democrats take control of the House but Republicans retain control of the Senate -- the President hasn't mentioned the immigration orders or tweeted about the migrant caravan that formed his campaign closing argument.

A White House aide told CNN ahead of Trump's remarks last week the President would unveil an executive action requiring migrants to request asylum at legal points of entry and preventing them from claiming asylum if they are caught crossing the border illegally. Although the President referenced such a policy in his speech, he offered no defense of how such a plan, once finalized, could be legal, given laws presently allowing migrants the right to claim asylum once they are on American soil.

The Trump administration has been looking at ways to limit the number of asylum seekers, with the President and his allies often describing asylum as a "loophole."

The Immigration and Nationality Act says that anyone who arrives in the US "whether or not at a designated port of arrival" may apply for asylum if he or she has a "well-founded fear of persecution on account of race, religion, nationality, membership in a particular social group or political opinion."

CNN has also reported the administration is considering a plan to limit the number of migrants able to enter at legal ports of entry by "metering," essentially creating a waitlist to allow people to enter only if the Department of Homeland Security has the capacity to process and detain them at one of its facilities, a department official said.

In the past, the practice of metering has resulted in individuals deciding not to endure a lengthy wait to try to get into the country legally and instead to cross illegally. Should some of this group of migrants do the latter, they could face a tougher and higher standard for seeking asylum under the administration's plans.