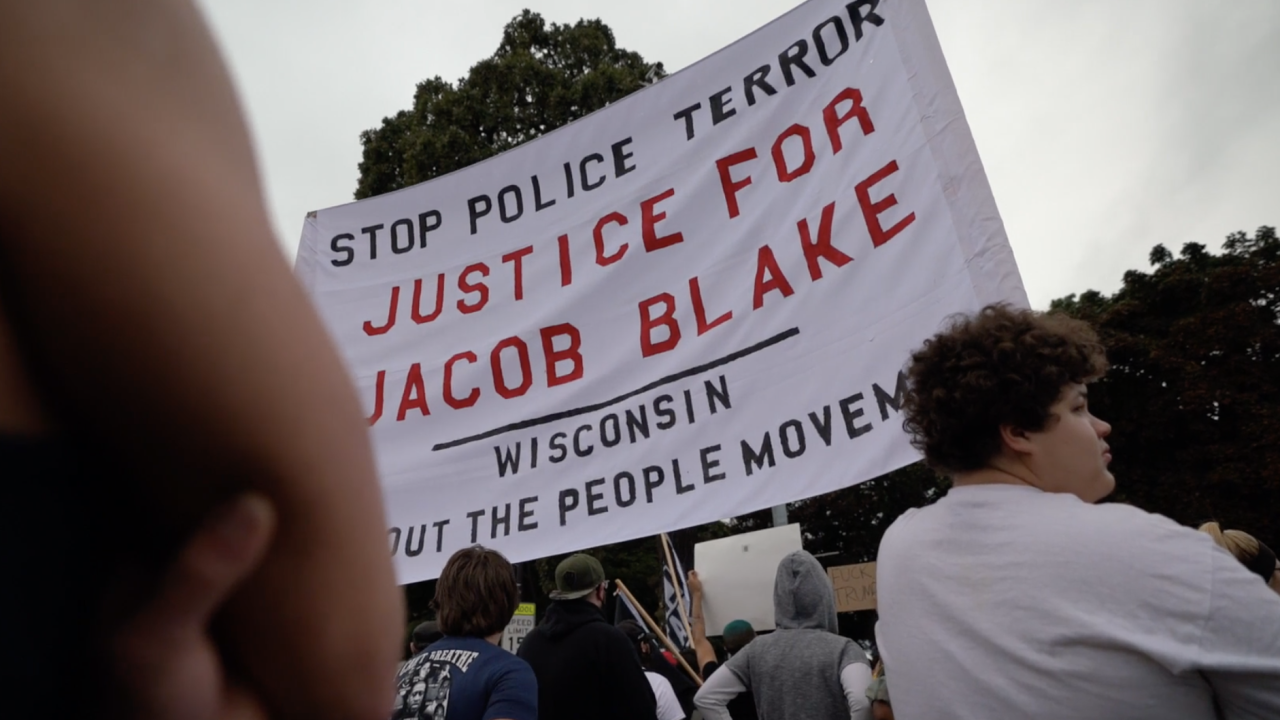 KENOSHA, Wis. – From famous athletes to everyday Americans, people across the country are making their voice heard regarding police brutality.

“I’m hurt inside, honestly, and there’s only so much a person can take until that hurt turns into anger,” said Alicia Zamora.

Art is how Zamora lets out her pain. In Kenosha, Wisconsin, she’s stenciled in Jacob Blake’s name into a mural on a boarded-up convenience store that she and her sister worked on for three days.

“I think a lot of people struggle with trying to do something that makes a big impact on the situation that’s going on. For us, that’s painting and drawing for other people it’s protesting,” said Zamora.

The situation she’s talking about is the shooting of Jacob Blake by a Kenosha police officer. While Zamora painted, some big-time basketball stars have been protesting.

After Blake was shot by a police officer, Zamora turned to art.

Others, including some big-time basketball stars, decided to protest.

“Over the last few days in our home state of Wisconsin, we saw the horrific video of Jacob Blake shot in the back seven times in Kenosha. Despite the overwhelming plea for change, there has been no action. So, our focus today cannot be on basketball,” said Sterling Brown, a player on the Milwaukee Bucks.

Last week, the Bucks refused to take the court for a playoff game. That started a domino effect that canceled all NBA games for three days, sparked protests in the WNBA, Major League Baseball, the National Hockey League, and Major League Soccer.

“That it came at the very last second when all the television cameras were trained on the floor expecting there to be a game, made it that much more powerful,” said Kevin Blackistone a professor of journalism at the University of Maryland and a columnist for the Washington Post.

He says athletes have a platform that extends beyond the court and they’re going to use it to speak to Americans. They're using that platform to reach fans at a critical time in history.

“They can’t turn away from sports, what happens in sports. And in this case, when they tried to turn away from it, it wound up leading local news,” said Blackistone.

At least in Kenosha, many residents are paying attention to what athletes have to say, although their reactions differ.

“I’m disappointed in it. I’ve just become less and less of a fan,” said Alan Eries, who was at the protest supporting President Donald Trump.

“They’re people of color, they’ve grown up in these communities. A Milwaukee Bucks player got hassled by the police a while back,” said Kevin.

When players did finally return to the fields, the ice and the hardwood, many kept their message strong.

“Imagine losing a father, losing their life, while they have kids. Imagine a father, son, brother getting shot seven times in front of their kids. Imagine that. We’ve been fighting this fight for a long time and we’re tired of being tired,” said Jamal Murray, a player on the Denver Nuggets.

Tired of how long Black Americans have been asking for fairness and justice.

“What is it? Friday marked the 57th year since Dr. King walked down the same bridge in Washington, gave his speech. So, we’re still here, 57 years later on the same problem, which is insane,” said Zamora.

For Zamora and those in Kenosha fighting for justice, the words of athletes might not be the most pressing issue, but the voices of professional athletes do matter, just like the voices on the ground.

“Anything that we can do to show we are supportive, that’s pretty much what we’re doing. It takes something very small to make a big impact on a community,” said Zamora.

Like a mural, outside of a boarded-up convenience store.