Rio Rico High School: An against all odds story to success 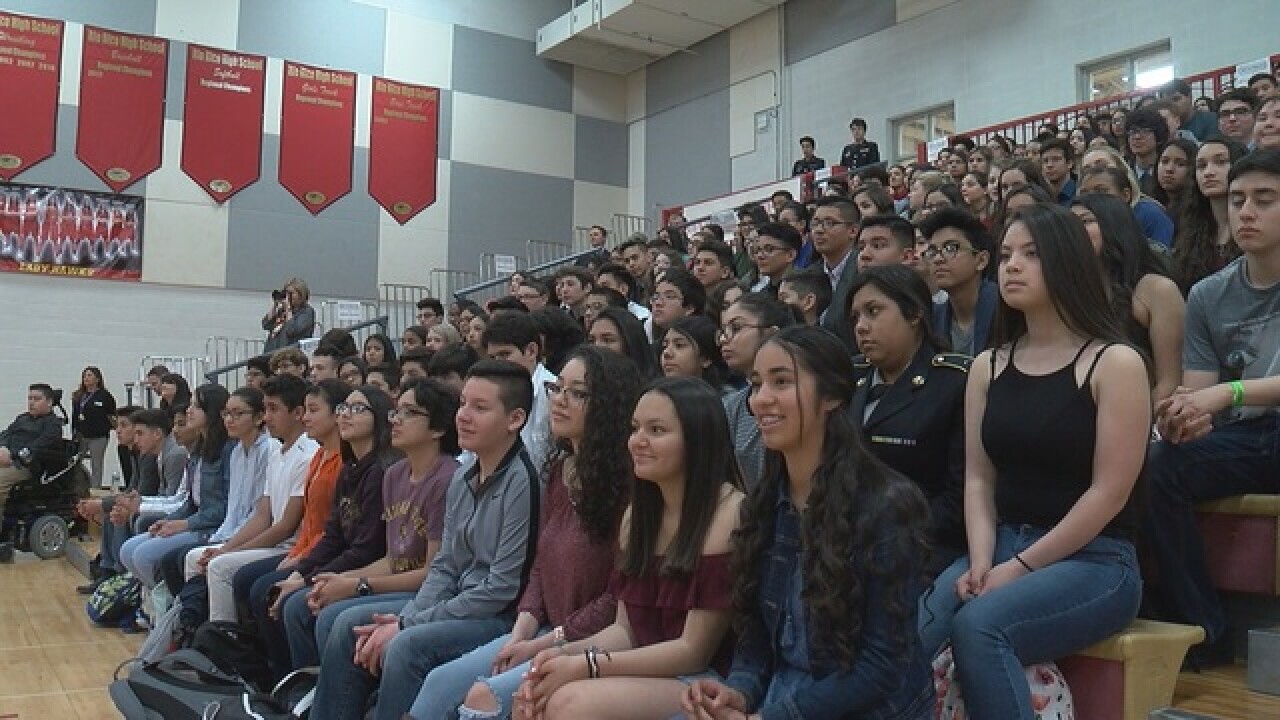 It was an against all odds story of a school that has survived and thrived. It's a story that's sure to resonate with any student, parent, and educator.

This once struggling Rio Rico High School received the College Board's AP Small District of the Year award in March.

The story behind the high school's rising success centers on pure grit, and the power of high expectations.

The academic climb began 7 years ago, when Principal Shelly Vroegh was hired and faced this challenge: a campus filled with primarily one culture, 98% Hispanic, many of them poor and with limited educational influences.

Principal Vroegh says, "I was hired as a new principal because the school was in transformation by the state because of low graduation rates and our AIMS Math scores."

But something happened, that even the school didn't expect.

"It's taken 7 years, but it has been amazing," says Vroegh. She says she began by simply taking risks by setting all the bars higher and higher every year for students, and instilling a belief in themselves.

AP Teacher Margaret Shaw says students "are aware of the rigors and extra work that it's going to entail."

Senior Sebastian Valencia agrees. He says "there's definitely those nights where you stay up and you question your ability to do homework."

For Jordan Sene, she says it's "mind over matter. [Teachers] are always telling me that you can do it and I am going to help you and you're going to get over this obstacle."

Valencia agrees and says, "once you have that mindset, you know you can really push the limits of what you hope to achieve."

Principal Vroegh says "I've always believed that people are people and when you empower people, they can do amazing things."

KGUN 9 wanted to uncover how the school worked to achieve this award, so we spoke to the principal, educators and students.

Principal Shelly Vroegh says it's been 7 years in the making, and it wouldn't be possible without empowering her teachers and students.

Vroegh was hired in 2011 as the principal, she says "the school was in transformation by the state because of low graduation rates and our AIMS Math scores."

Vroegh says it's the passion that drives this school. She says if you ask any teacher, "if you were to go out anywhere on this campus and say 'what keeps you at Rio Rico High School?' their number one answer will be the kids."

Loree Johnson has been a teacher for 7 years. After winning AP District of the Year, she says it's important to remember it's not about the scores.

For Johnson, it's all about teaching the students skills they can use for the rest of their lives.

She says, "I've had kids come back. Quite a few kids comes back from college and say 'I got an A on my first essay' and they're so proud. Not all of them passed the [AP] exam but their skills are better and so ultimately it's a winning situation if you're improving their skills."

Margaret Shaw believes the success of Rio Rico is largely due to the district's decision to pay for every student's AP exams.

Santa Cruz School District has committed to making sure very student that wants to take an AP course, can take one. The expectation when a student sign up for an AP course, is that the student takes the test.

Shaw says there are many programs at the high school. She says students take advantage of theose programs, "especially if they're hungry for college."

For Sebastian Valencia, the key to success is a person's mindset.

He says, "I truly believe that success and advantages are not because of race but are because of mindset for an individual."

Valencia also attributes the teachers for his success. He says, "luckily, I have the opportunities here at school with the teachers and the educators. Everyone here can help you in some way, shape, or form."

Jordan Sene believes that regardless of your background or struggles, you can challenge yourself and that it's okay to fail.

When she talks about failure she says, "you have to learn how to get up and keep going" and even though you may fail or make a mistake, you can succeed "with the encouragement from teachers and staff and your parents, that you can do it."

Hector Ruelas says he never thought he could score a 4 on his AP Spanish 3 exam. But with the help of teachers at Rio Rico High School, he was able to achieve success.

He says there have been times where AP courses seem too hard, but he says he always tried his best and that teachers are there to help if he can't figure it out on his own.

Ruelas has a younger brother. He says he's become the role model for his brother, encouraging him to take AP classes.