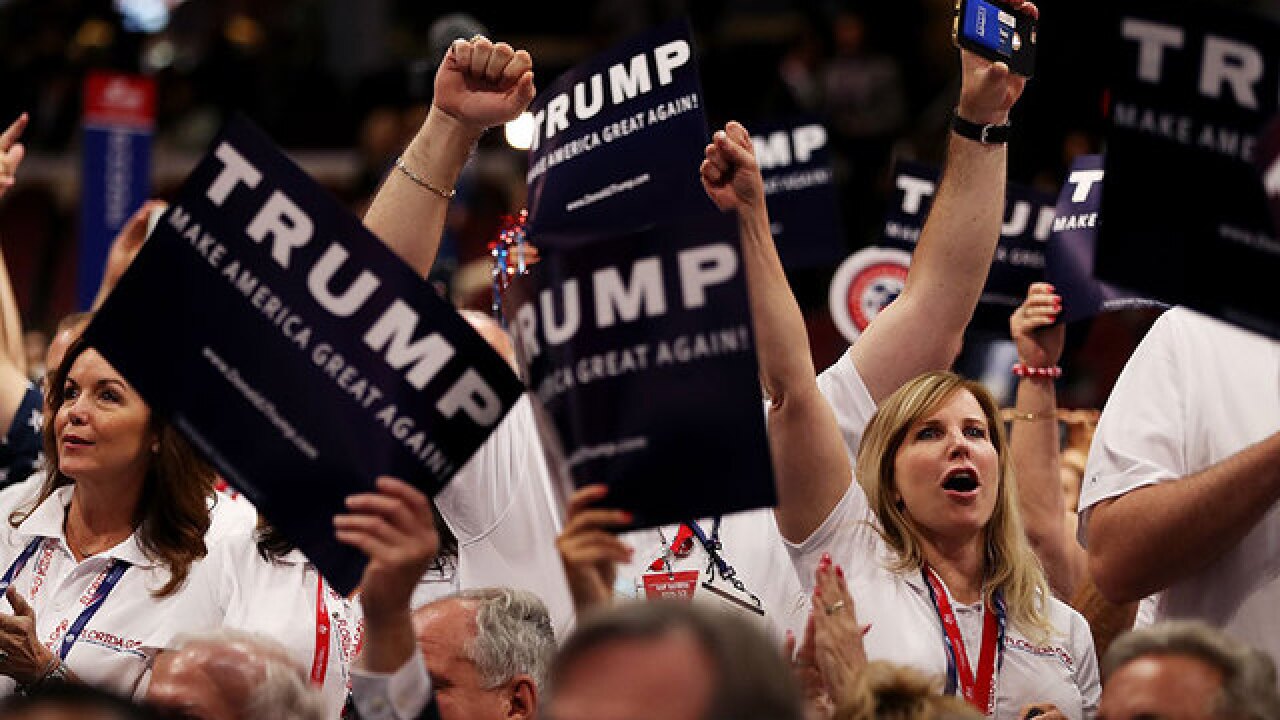 <p>Delegates hold signs in support of presumptive Republican presidential candidate Donald Trump during roll call on the second day of the Republican National Convention on July 19, 2016, at the Quicken Loans Arena in Cleveland, Ohio. (Photo by Joe Raedle/Getty Images)</p>

The great virtue of a poorly produced and marketed political convention is that the message it sends is true and honest, not the usual false and phony. The Republican National Convention in Cleveland is just that, true and honest.

What you see is what you are going to get.

And what you’ve seen is simple: a convention for white people who are deeply pessimistic and who have a visceral hatred of Hillary Clinton.  There isn’t a whole lot more to it than that. There’s not a lot of window dressing.

The official theme of the convention is all about loss: “Make America Great Again.” The emotion that rests on is that America once was really great but it isn’t anymore. What was great has been lost.

And who suffers from that loss, according to the convention message? The white people do, the normal Americans, the people who had it great once upon a time but don’t anymore.

Who is to blame? One person and lots of “identity politics” groups who aren’t part of normal America, groups that use hyphens or tribal identifiers: African-Americans, Hispanics, the LGBT community and secular humanist.

The person responsible for all this is Hillary Rodham Clinton. Sure she had help from Bill Clinton, Barack Obama and the liberal media. But it is Hillary Clinton who is the covert leader of a vast right-wing conspiracy.

Do not make the mistake of supposing that the hatred the delegates here have for Clinton is a mirror of how much Democrats hate Trump or, for that matter, how much party loyalists always hate the other side’s candidate. That just isn’t accurate. This is deep emotional hate, not political opposition, not mistrust, not disagreement to that max. It’s a pathology cultured by a 30-year assault.

This is palpable on the convention floor and the sidewalks of Cleveland. The most ubiquitous T-shirt says, “Trump that Bitch.” Little old ladies from Kentucky wear it in public, as do preppy men from North Carolina with distinguished grey hair, platinum blonde 20-somethings from Texas with diamonds and crew-cut men of commerce from Wisconsin.

Republicans once saw part of their mission as upholding family values, public etiquette and conservative good manners against a counter-culture of permissiveness and anti-authoritarianism. That strand of American conservatism is as dead in Cleveland as William Howard Taft.

The lone truly spontaneous moment on the convention floor came when Chris Christie read a mock indictment of Clinton.  “Lock her up, lock her, lock her up,” the delegates’ chanted, with all the bile of a lynch mob or a heretic’s inquisition. Ho Chi Minh got gentler treatment at the ’68 GOP convention.

The cable commentators didn’t have the confidence, authority or courage to simply say that this is beneath the dignity and honor of a key ritual in American democracy. They talked about tactics and horserace and that was it.

The frothing, goose-stepping crowd on the floor was all white. Of the 2,472 delegates, 18 are black -- 0.7 percent. That is the lowest level at a GOP convention in a century. It is an accurate portrait of the activist population in the GOP, true and honest.

There were a few black speakers. One was Dr. Ben Carson, who figured out a clever way to expose Hillary as a tool of Lucifer via the writings of Saul Alinsky.

Another was Colorado Senate candidate Darryl Glenn.  He said, “Somebody with a nice tan needs to say this: All lives matter!” That is dog-whistle code to disparage the Black Live Matter movement and the legitimacy of the unique issues, grievances and ambitions from a pluralistic black community.  The message to minorities was simple: We are a big tent white party and you can be white too if you want to and play nice.

Above all this was a gray-black cloud of gloom, false nostalgia and dread.  Republicans were long the optimist party, the party of Eisenhower, Reagan’s “Morning in America,” and the Bushs’ happy sparring with the “gloom and doom” crowd.

TrumpCon Republicans ooze loss and dread, not just anger. It is an anti-inspiring message, a very dark lens on America.

“The vast majority of Americans today do not feel safe. They fear for their children and they fear for themselves," snarled former New York Mayor Rudy Giuliani, sounding like George Wallace with a New York accent.

"Folks, our country right now is in a very bad spot,” said noted social psychologist Scott Baio, better know as Chacci from “Happy Days.” “You can feel it, and you can see it everywhere. There's no stability. Nothing seems right, and all the things we hold dear are being attacked every single day.”

Really? All the things we hold dear are attacked every day? This as good a tag line for the convention as any.

The anemic Never Trump forces here crusade because they believe Trump can’t win in November or that he is insufficiently conservative. It is not a rebellion against the segregated, infuriated and depressed party.

The convention, by sheer incompetence, bares naked the activist core of the party on live television – Botox, Confederate flag tattoos, warts and all.

If I thought the convention truly represented the whole Republican Party and sympathetic independents, I’d be as wracked with dread as the “gloom and doom” GOP.  But I am comforted that little of what is happening inside the Quicken Loans Arena represents the normal America I know.