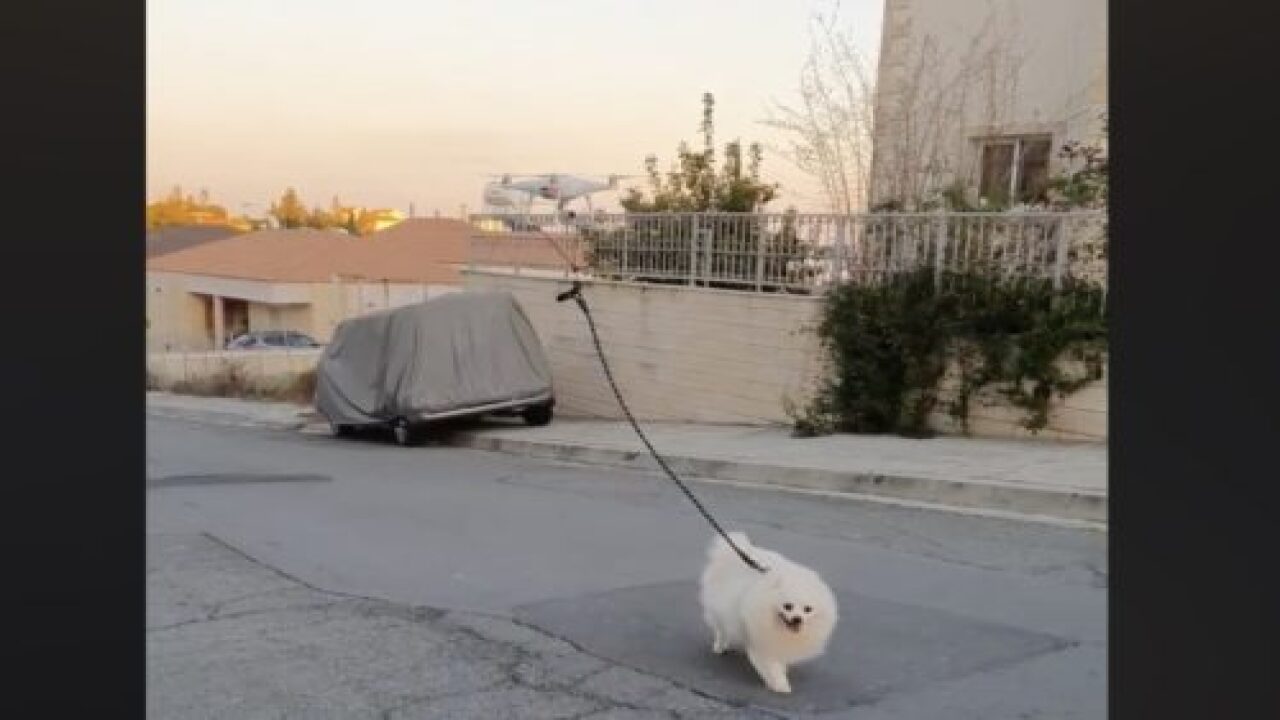 With so much of the world shut down due to fears over the coronavirus, people are getting creative when it comes to completing their daily errands while still practicing social distancing.

Take one Facebook user, Vakis Demetriou, from the Mediterranean island country of Cyprus. He posted a video last week of his dog being walked by drone during self-quarantine. Naturally, the video has gone viral. The original video has 1.7 million views and has been re-posted on many sites.

He captioned the image with the words, “Stay Home Safe but don’t forget your dog happiness.”

It actually reminds us of a scene in 1985’s “Back to the Future 2” when Marty spots a drone-like device walking a dog in the year 2015.

And we’re not the only ones who noticed this! @MaryMorganVoice posted this on Twitter:

So while the idea of dog-walking via drone is clearly not all that new, it still seems like a brilliant solution for helping people stay at home while still overseeing the health and comfort of their canine pals. Still, some people had concerns.

For example, many Twitter users said it looked like the dog was actually walking the drone. And with big dogs, Twitter user @OctaneBoy noted that people might need something a bit more heavy-duty for controlling their pups:

I have a Mastiff and a Great Dane. Here's my dog walking drone: https://t.co/JqCPQGZoob pic.twitter.com/7uNvwCgSM3

Meanwhile, Twitter user Sarah Cooper (@SMC_on_IoT) pointed out that even if your dog isn’t one of the larger breeds, this still might not work:

Give a Dog a Drone!
Dog Walking by Drone? Try that w/ a bulldog ð#dronetech #IoT https://t.co/QPajRySTpK Hint: 4/1 pic.twitter.com/3NmhldSe2a

Of course, there are other issues that savvy social media users like @kryptokonrad have pointed out. For example, who’s even recording this video? Doesn’t it defeat the purpose if the owner of the dog is out there filming the walk?

i call BS cause it is NOT filmed by a drone pic.twitter.com/KkNLKq1J1K

And how does the poop get picked up? How do you stop your dog from chasing the drone, as some might be tempted to? What happens if the drone stops working properly?

In this GIF from @ProductHuntIRL showing a dog-walking drone, it looks like something might be going wrong…

So clearly, there are a few things that need to be worked out when it comes to drone-based automatic dog walking. And not everyone agrees it’s a good idea. The American Kennel Club recommends we not walk our dogs with drones. Plus, the CDC says that going outside (as long as you take precautions) is still fine — and good for mental and physical health, unless you are actually sick.

Still, in these uncertain times, it’s cute and heartwarming to see such an idea put to successful practice, even if just for the short span of a Facebook video. This dog looks like it’s having fun — and this is the coronavirus content we need to get us through the next few weeks!