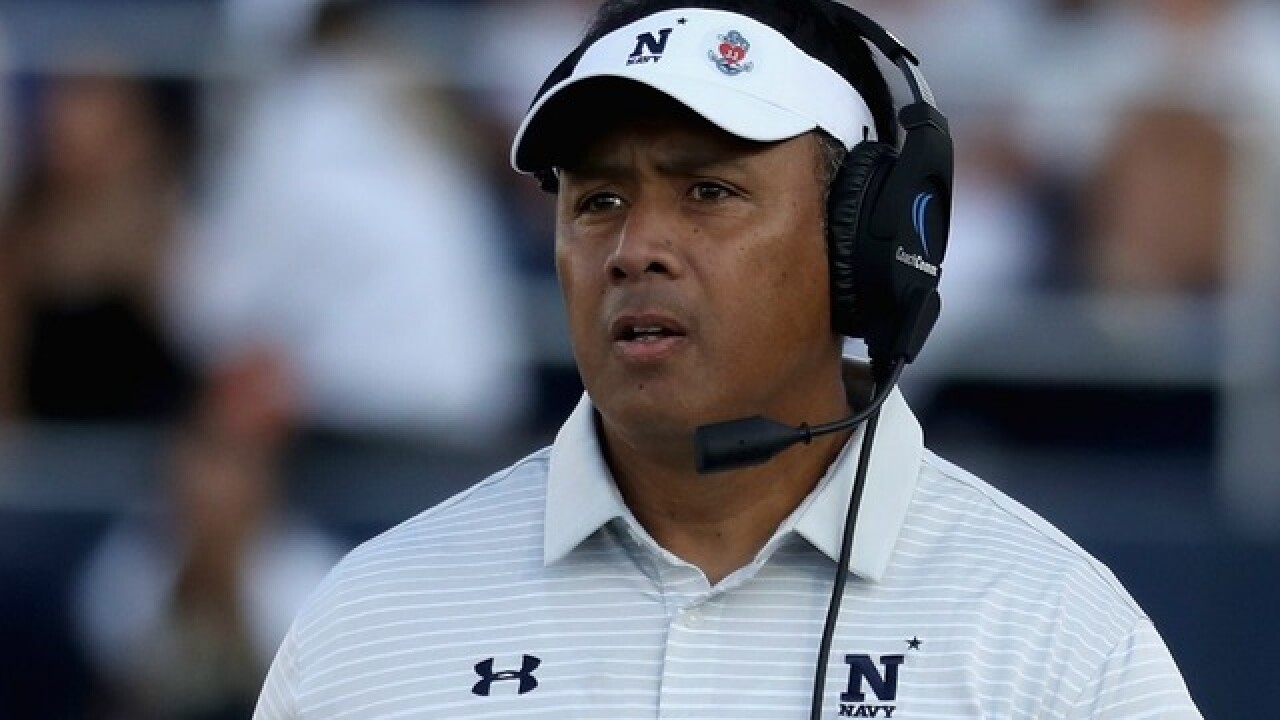 Copyright 2018 Scripps Media, Inc. All rights reserved. This material may not be published, broadcast, rewritten, or redistributed.
Rob Carr
<p>Head coach Ken Niumatalolo of the Navy Midshipmen looks on against the Tulane Green Wave at Navy-Marine Corp Memorial Stadium on September 9, 2017 in Annapolis, Maryland. (Getty Images)</p>

Ken Niumatalolo could be close to leaving the Navy for the desert.

The 52-year-old coach of Navy's football team has been offered the head coaching job at UA, according to Wildcat Authority's Jason Scheer. Football Scoop's Scott Roussel said UA is currently negotiating a contract with Niumatalolo. He would replace Rich Rodriguez, who was fired by Arizona last week amid sexual harassment allegations.

"Sources are expecting an answer (from Niumatalolo) by the end of the day," Scheer reported Friday.

However, ESPN's Adam Rittenberg reported later on Friday that Arizona hasn't offered the job to anyone and has yet to open negotiations with any candidates.

"These things can move quickly but nothing is done, I'm told," Rittenberg reported.

Niumatalolo has coached at Navy since 1995. He served as a running backs coach, QB coach, special-teams coach, offensive coordinator and associate head coach for the Midshipmen before earning the head coaching job in 2007. He has a career 84-48 record as Navy’s head coach, including five seasons with at least nine victories. Navy went 7-6 in 2017.

A Hawaii native, Niumatalolo was a quarterback at the University of Hawaii, where he briefly played under eventual UA head coach Dick Tomey. Niumatalolo wrote the foreword for Tomey’s book, “Rise of the Rainbow Warriors.”

Navy coach Ken Niumatalolo -- an emerging name in the Arizona coaching search, according to @FootballScoop -- was a QB at Hawaii in the 1980s, first under Dick Tomey. Niumatalolo in the foreward to Tomey's book, Rise of the Rainbow Warriors: pic.twitter.com/CM4A323aKJ

Niumatalolo has had offers to leave Navy in the past. He was offered, and ultimately declined, the head coaching job at BYU after the 2015 season.

Niumatalolo has used a run-first, "flexbone" triple-option offense at Navy. Last season, the Midshipmen were second in the nation (behind only Army) in rushing yards per game. Incidentally, Arizona was third in that category.

UA quarterback Khalil Tate, however, apparently isn't a fan of the potential hire of Niumatalolo -- or at least the offensive scheme he has run at Navy. (He deleted this tweet within minutes.)

He just deleted the tweet, but here it is. pic.twitter.com/wELkRSqlD1