What happens when police take an officer’s word over video evidence?

Before Matthew Schneider tasered a handcuffed man in the groin after a traffic stop, the Glendale officer claimed he stopped the vehicle for an alleged turn signal violation. But surveillance footage shows Schneider never saw that violation.

Before Matthew Schneider tasered a handcuffed man in the groin after a July 2017 traffic stop, the Glendale officer claimed he stopped the vehicle for an alleged turn signal violation.

Despite clear video evidence, a collection of top supervisors overturned most of the findings of an internal investigation into their department’s top arrest leader, allowing him to evade accountability for making up probable cause to stop the vehicle in the first place.

It’s a move that likely kept Schneider off of the Brady list.

“That’s the problem with the system now,” said Jared Keenan, a former defense attorney now with ACLU Arizona. “The gatekeepers for this list are the same people who have an incentive to keep names off of the lists -- both police agencies and prosecuting agencies.”

In 1963, the U.S. Supreme Court in Brady v. Maryland ruled police and prosecutors cannot withhold exculpatory evidence, especially past dishonesty by officers. As a result and to ensure disclosure, prosecutors began maintaining “Brady lists” of law enforcement officials with integrity concerns, including past crimes, lying on the job, and other misconduct.

But the process for placing officers on Brady lists in Arizona counties is almost entirely reliant on voluntary reporting and self-investigation by police departments.

There is no outside oversight to ensure officers who’ve engaged in Brady-level misconduct actually get put on the list.

It means no one knows how many additional names are missing from the 1,400 law enforcement officials that ABC15 discovered on Brady lists across the state.

“We will probably never know the number of officers who should be disclosed,” Keenan said.

And the abuse of force in Glendale highlights how departments hold extraordinary power to determine what misconduct allegations are sustained and reported, and what misconduct they decide to keep hidden from disclosure.

On July 27, 2017, Johnny Wheatcroft was a passenger in a silver Ford Taurus when a pair of Glendale police officers pulled in front them in a Motel 6 parking lot.

Minutes later, Wheatcroft was handcuffed lying face down on the hot asphalt on a 108-degree day. He'd already been tased 10 times, with one officer kneeling on his back as another, Officer Matt Schneider, kicked him in the groin and pulled down his athletic shorts to tase him a final time in his testicles, according to a federal lawsuit and body camera footage obtained by ABC15.

The scene was witnessed by his 11- and 6-year-old sons.

Multiple independent law enforcement experts, who agreed to review the incident, said the officers’ conduct was unlawful, potentially criminal, and one of the most cruel and troubling cases of police misconduct they’ve ever seen.

Schneider said he “observed the listed vehicle (Ford Taurus) fail to use its turn signal when it drove from Glenn Drive into the Motel 6 parking lot,” police records show.

Schneider also repeated the claim to other officers at the scene, according to his body camera footage.

The buildings have thick vegetation in front and do not have exterior windows, making it impossible to see through from one side or the other.

Below is a diagram of the property showing the back alley, where the Glendale police vehicle drove in, and Glenn Drive, where the Ford Taurus entered. 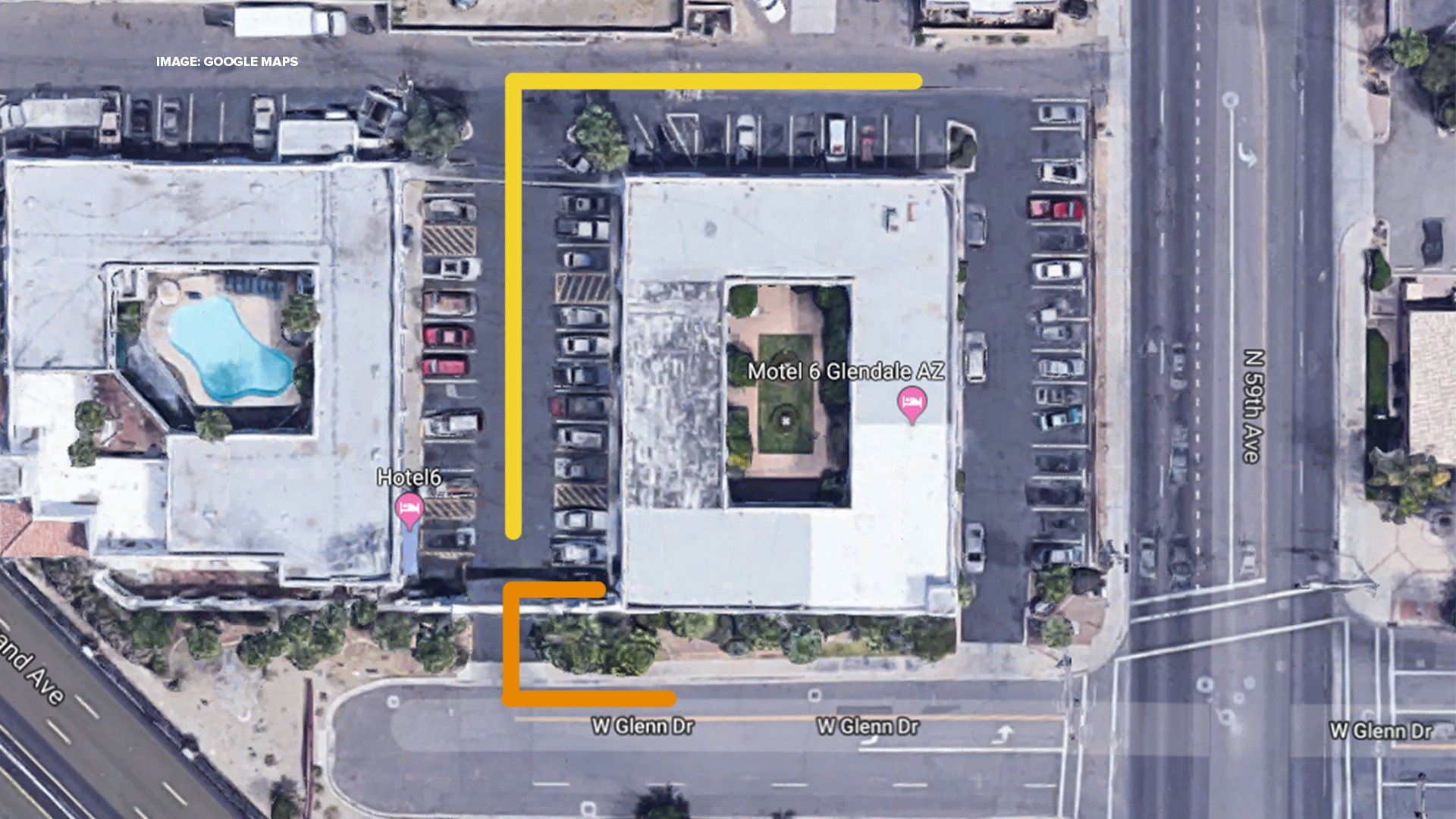 Surveillance video from the building shows that when the Taurus enters the lot, the Glendale vehicle can’t be seen emerging from the back alley until about a second or two later.

Body camera footage also shows the officers driving in the back alley for about 15 seconds before turning into the center parking lot. In the video, the buildings of the back alley can be seen passing by in the vehicle’s windows.

By examining similar evidence, a Glendale internal investigator concluded it was “clear that Schneider could not see through the building to observe the traffic violation. Schneider did not have probable cause.”

Schneider even admitted he couldn’t have seen the violation in an administrative interview.

It didn’t matter to top Glendale police officials, including a sergeant, lieutenant, commander, and an assistant chief.

They all overturned the findings.

Schneider was disciplined for the incident.

The veteran officer was suspended for three days based on his use of force. Two other allegations were not sustained. One related to the initiation of the traffic stop, and the other for threatening the passenger with arrest if he didn’t provide identification, which isn’t required under Arizona law.

During an internal investigation interview, Schneider was confronted with the surveillance video proving he could not have seen a turn signal violation as he had repeatedly alleged.

INVESTIGATOR: So explain to me how the signal, how you could have seen the signal from where you’re at? I mean, there’s just, I’m trying to give you the opportunity to explain, because there’s just no way you could see through at that angle of where it’s at.

SCHNEIDER: I mean, unless you, the angle looks horrible. I’m not, I’m not going to lie. That does not look favoring to me at all… Now obviously you know, watching this, um, yeah, it’s not possible I saw that violation.

There’s another exchange later in the interview.

SCHNEIDER: Honest to God, I really believed the day that it happened that I saw the no signal, and that’s why I said something to (my partner), that’s why we contacted the vehicle. I don’t have any explanation for this camera angle, I really don’t.

Lt. Earl Montgomery wrote: “There is a lack of sufficient evidence to prove that Officer Schneider did not observe a turn signal violation… Additionally, Officer Pittman advised is his statement that he observed the turn signal violation from a different camera perspective while reviewing the Motel 6 surveillance footage.”

Officer Pittman was a close colleague and partner of Schneider. The two starred in the TV show COPS together.

The two officers claimed that the day after the traffic stop they want back to the Motel 6 and saw another surveillance camera angle proving the vehicle didn’t use its blinker.

However, Pittman told an internal investigator they never got a copy.

“We tried to get that burned, but she said she didn’t know how,” Pittman said. “We asked her if she could get the manager to burn it when he got in. But I don’t know if that ever happened.”

It’s not clear why Pittman or Schneider, who are both equipped with body cameras, never recorded the screen themselves. The internal investigation also doesn’t address why no one ever went back to try and obtain the additional footage.

Regardless, in the highest-ranking opinions, Commander Brandon Blanco and Assistant Chief Christ LeVander ensure the findings against Schneider would not be sustained.

“The video obtained does not prove or disprove what Schneider observed while the vehicle turned into the parking lot,” according to a statement written by Blanco and cosigned by LeVander. “Schneider has been adamant during the entire investigation that he observed the driver fail to signal.”

Schneider was considered one of Glendale’s top officers.

In his annual review from the same year as the traffic stop, a supervisor wrote: “(Schneider) has ‘IT.’ He is a bloodhound against criminals and can dig up crime anywhere you put him.”

A sustained allegation against Schneider for manufacturing probable cause, dishonesty, and unlawfully threatening to arrest someone would have had significant consequences for the officer and department.

That’s evident from the fallout after ABC15 exposed the incident: the FBI opened an investigation, Schneider is currently facing a criminal charging decision from federal prosecutors, the state police board opened a disciplinary case, and Schneider ended up forfeiting his police officer certification.

All of the delayed accountability coming from a traffic stop in which top Glendale officials supported Schneider’s actions and found little wrong.