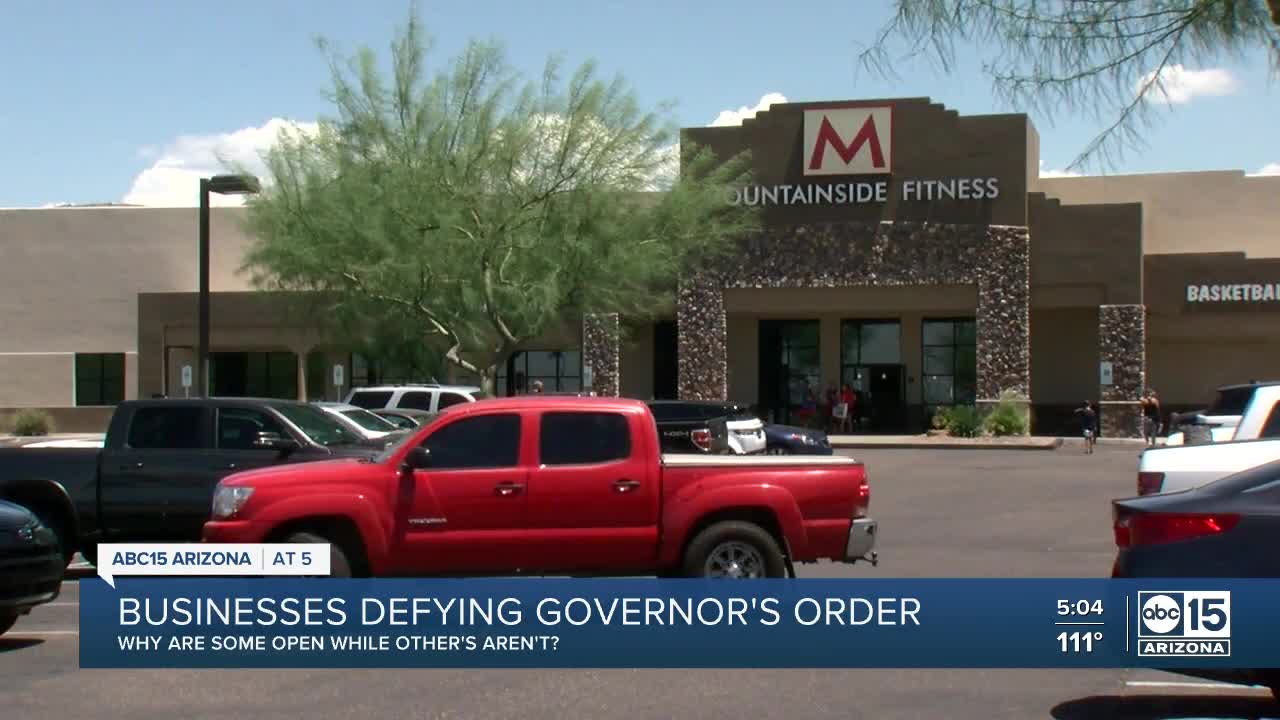 Why are some open while others aren't?

As some Phoenix area businesses continue defying Governor Doug Ducey’s executive order to close bars, gyms, movie theaters and water parks for thirty days, others are questioning whether or not they fall under the order to begin with and staying open.

On Monday, Mountainside Fitness founder Tom Hatten is planning to ask a judge for a stay, allowing his chain of Valley gyms to continue operating without legal worry. So far, Hatten has refused to close any of the company’s locations despite receiving citations from several police agencies and being threatened with civil action by the Arizona Department of Health Services.

“We are not the cause of the coronavirus spike, period,” he said Friday, during a news conference, reiterating he believes the Governor’s executive order to close gyms was an arbitrary decision without any evidence gyms are contributing to the state’s spike in COVID-19 cases. Hatten said he will comply if a judge orders him to do so.

Another major gym chain, Life Time Fitness, also defied the Governor’s order for several days last week. On Friday, AZDHS announced Life Time would comply after they were also sent a letter threatening legal action and the company had liquor licenses revoked at several cafes inside its facilities. The company has since closed its workout areas but other amenities, including the salon, spa, food kitchen, kids clubs and pools remain open.

What about rock climbing, gymnastic facilities and trampoline parks?

There is the most ambiguity in this category of business.

The Governor’s executive order calls for “Indoor gyms and fitness clubs or centers” to close and a spokesperson for Ducey’s office last week clarified to ABC15 this applies to all “workout facilities.”

Still, while rock climbing center ‘AZ on the Rocks’ in Scottsdale decided to close following the executive order, Phoenix Rock Gym in Tempe remains open. On Facebook, the company said — despite its name — it is not a gym and instead, a “climbing facility” so the executive order does not apply.

So far, popular trampoline parks including Urban Air and Sky Zone remain open, but both companies said online they have implemented new cleaning and health and safety protocols.

On Sunday, reporters reached out to the Governor’s office for clarification on these business types but has not yet heard back.

What about water parks?

Steve Carlston, General Manager of Golfland Sunsplash in Mesa, told ABC15 last week its water park would be closed to comply with the Governor’s order.

“Our hands are tied pretty tight,” Carlston said. “Our season is pretty short. Our income is based on the water park being able to open. Without it, we can’t stay afloat.”

Still, a 15-minute drive north on Loop 101, Great Wolf Lodge in Scottsdale has kept its water park open. A spokesperson told ABC15 since the facility is technically located on the Salt River-Pima Maricopa Indian Community, the Governor’s executive order does not apply.

The Governor does not have the authority to close casinos because they are located on tribal lands. It is up to the leadership of each Native American community in the state to decide whether or not to close its casinos.

The death of Robert Washington, a security guard with underlying health conditions at Gila River’s Lone Butte Casino, drew intense criticism toward the gaming chain. Washington contracted COVID-19 days after his family said he was given the option to return to work or lose his job.

Gila River shut down its three Valley casinos for two weeks following Washington’s death and after employees alleged health and safety procedures were not being followed.

On Thursday, the casinos reopened with new procedures, including mandatory mask usage and temperature checks for all employees and visitors. Gila River is also offering at-risk employees paid leave due to the pandemic.