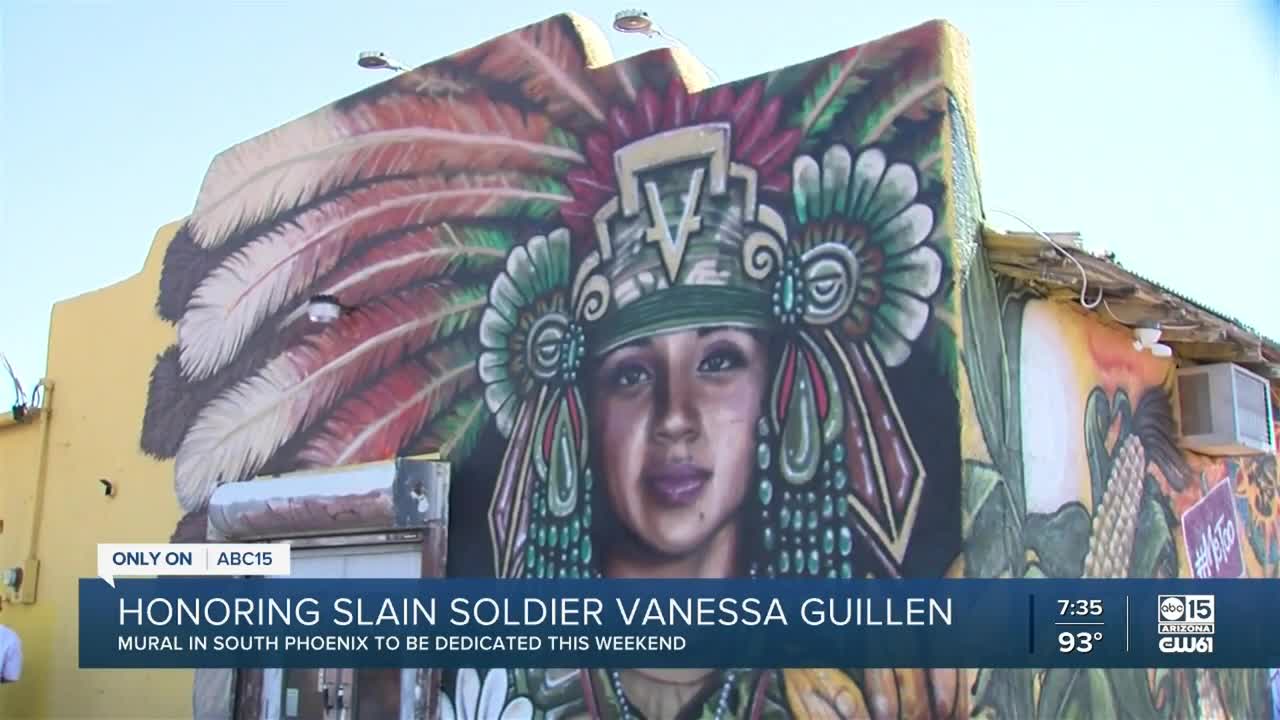 In South Phoenix, a huge mural honors Vanessa Guillen -- and it means even more than that.

A mural in south Phoenix will be dedicated in honor of slain U.S. Army soldier Vanessa Guillen Saturday.

Guillen was murdered and her body found in June near Fort Hood in Texas.

The huge mural is located on the side of Austin's Cash Market near 14th and Pima streets in Phoenix. The artists behind the painting told us the mural is a tribute to Guillen but it turned into much more.

A.J. Larson is a tattoo artist who took on the lead role in painting the tribute to Guillen.

"We decided to showcase, we gave her her dog tags. It has her name, her birth date, and her death date...her reborn date," Larson noted.

Larson said the artists were hesitant at first stating, "It wasn't something that we actually wanted to do because it's such a tragic thing going on but we felt it, we were emotional about it, and we decided to take the task."

He was recruited by his friend Blas Rocha who was moved after hearing Guillen's story.

"Instead of something trending on social media for like a week...two weeks... you want to be like, 'hey, you know what, we're not going to forget about you, we're not gonna forget about fighting for you,'" Rocha said.

Guillen's death has struck a chord across the nation, particularly in the Hispanic and Latin community.

Organizer Michael Valdez said many of those involved are "girl dads" and couldn't let Guillen's memory fade. He added, "across the country we're dealing with a lot of things happening right now, a lot of uneasiness and for myself being a father, I have two girls. I think with a lot of people, it impacted them."

So a group of tattoo artists set out to paint the tribute to Guillen -- all freehand, too. And it was a true passion project.

Artist Felicia Garcia said, "We would leave the shop around midnight when we would stop tattooing. Head over here, set up, start around one, then leave here around five, six in the morning and head back to the shop around one and start the day over. We did that for about two weeks."

And what sits there now is a portrait with an ode to Guillen's Latina roots.

"We decided to showcase her face and her uniform but this is an Aztec princess because she died a warrior. She was reborn a warrior. And in the Mexican culture this is the greatest honor there is," Larson explained.

Those involved call it activism in art. Along with the mural of Guillen, there are tributes to the Black Lives Matter movement and to Dreamers.

Artist Kenyatta, who goes by "Philly," said, "We are just going through a lot right now we need some turn around we need something like this to bring attention to all the things going on in our country right now."

They hope people come and look at their work and leave feeling inspired to make a change in their communities.

A dedication and blessing is scheduled for 5 p.m. Saturday at the mural site at 1445 S. 13th Pl. in Phoenix. Those who attend are encouraged to wear a mask and practice social distancing.