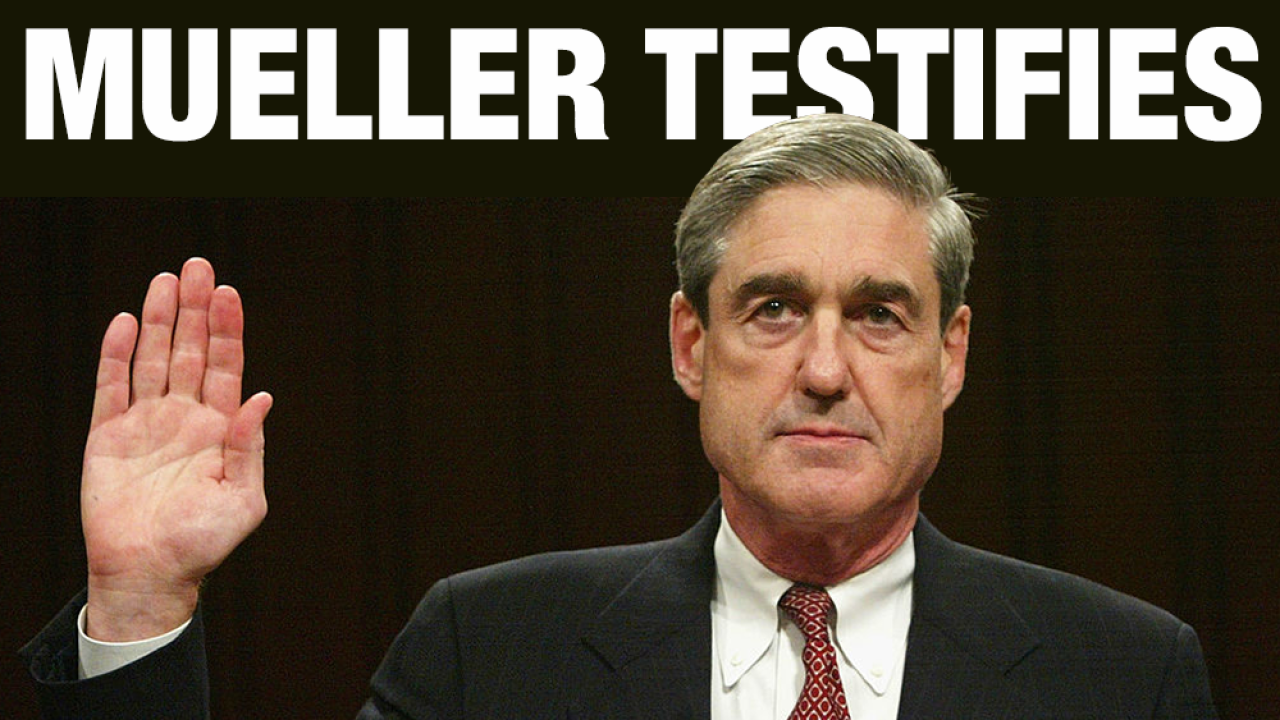 Former Special Counsel Robert Mueller told Congress on Wednesday that his investigation did not "totally exonerate" President Donald Trump as the President has claimed.

"The finding indicates that the President was not as exculpated for the acts that he allegedly committed," Mueller said. "It is not what the report said."

But beyond that response, Mueller's exchanges with lawmakers were at times shaky, with answers that were often halting and stilted in the face of rapid-fire questions. Mueller frequently referred them back to the report, asked for questions to be repeated and answered with short "true" or "that's correct" responses.

Mueller is testifying at the most highly anticipated hearing of the Trump presidency, with the potential to reset the narrative about his two-year investigation into the President's conduct.

After weeks of negotiations, twists and turns over Mueller's appearance and a pair of subpoenas, the former special counsel is now answering questions about his probe for the first time before the House Judiciary Committee, and will appear at noon ET before the House Intelligence Committee.

The former special counsel's testimony is the closest thing to a make-or-break moment as it gets for Democrats in their investigations into the President. It's a potential turning point for the House Democratic impeachment caucus that's banking Mueller can reset the conversation about the special counsel investigation and convince the public -- and skeptical Democratic colleagues -- that the House should pursue an impeachment inquiry into Trump.

Democrats have pointed to Mueller's report as a reason to take up impeachment, but he declined to engage on the question.

"Is it true that there's nothing in Volume II of the report that says the President may have engaged in impeachable conduct?" asked Rep. Jim Sensenbrenner, a Wisconsin Republican.

"We have studiously kept in the center of our investigation, our mandate," Mueller responded. "And our mandate does not go to other ways of addressing conduct. Our mandate goes to what — developing the report and turning the report into the attorney general."

Democrats walked Mueller through the key passages of his report, while Republicans sought to undercut the special counsel investigation, raising questions about his decision to write a lengthy report about the President's conduct when he did not decide to prosecute the Trump on obstruction of justice.

"Volume two of this report was not authorized under the law," charged Rep. John Ratcliffe, a Texas Republican and a former prosecutor. "I agree with the chairman, this morning, when he said Donald Trump is not above the law. He's not. But he damn sure shouldn't be below the law, which is where this report puts him."

In his opening statement, Mueller defended the work that his team did.

"My staff and I carried out this assignment with that critical objective in mind: to work quietly, thoroughly, and with integrity so that the public would have full confidence in the outcome," Mueller said.

But Mueller also telegraphed that he would not engage on many of the questions both Democrats and Republicans will want him to answer, from the origins of the investigation to how he decided whether or not to prosecute the President.

"As I said on May 29: the report is my testimony. And I will stay within that text," Mueller said.

Even if there isn't a bombshell revelation, Democrats are hopeful that the recitation of the key points of Mueller's investigation and what it uncovered about the President can move the needle.

"Although Department policy barred you from indicting the President for this conduct, you made clear that he is not exonerated. Any other person who acted this way would have been charged with a crime. And in this nation, not even the President is above the law," House Judiciary Chairman Jerry Nadler said in his opening statement.

"We will follow your example, Director Mueller. We will act with integrity. We will follow the facts where they lead. We will consider all appropriate remedies. We will make our recommendation to the House when our work concludes," Nadler added. "We will do this work because there must be accountability for the conduct described in your report, especially as it relates to the President."

But if Mueller's testimony fails to shift the conversation, it could spell the beginning of the end for Democratic efforts to impeach the President.

Ultimately, the direction that Mueller's testimony takes may come down to the special counsel himself and how he decides to engage with both Democrats and Republicans. Mueller comes to Capitol Hill a reluctant witness. He's largely an enigma to the public, despite the central and outsized role he has played in Trump's presidency.

Mueller and his team have said nearly nothing in the two years since he was appointed special counsel, preferring to let the special counsel's indictments and then the 448-page report do most of his talking. It's been six years since Mueller has been under the bright lights of a congressional hearing, and Wednesday's testimony is likely to be far more contentious, every word exponentially more scrutinized.

Mueller has been briefing with a small group of aides at his former law firm, Wilmer Hale, and he intends for his testimony to stick to the bounds of the report, a spokesman said, aligning him with a Justice Department letter sent Monday telling Mueller to limit his testimony to the document. Mueller will deliver an opening statement, but his written statement he's giving to the committees is simply the report itself.

Some Democrats have sought to tamp down expectations ahead of the Mueller hearing, hopeful that even if he recites the report it will nonetheless have a lasting impact.

"I am fairly realistic about the degree to which any single hearing, any single witness can really move the country in a particular direction," said House Intelligence Chairman Adam Schiff, a California Democrat. "People are quite dug in on their views of Trump and Russia, and more generally just on their views of this President. If the racist display by the President last week wasn't enough to change attitudes, I don't know that anything Bob Muller has to say will."

Still, Democrats are cognizant that Mueller's words carry significant weight. Mueller concluded his investigation in March, and the special counsel's report was released in April. But when Mueller finally spoke in May -- emphasizing that the investigation did not exonerate Trump on obstruction and that he could not consider whether to indict Trump because of Justice Department guidelines -- it moved a sizable tranche of House Democrats to call for an impeachment inquiry.

Trump's Republican allies on both the Judiciary and Intelligence Committees are expected to press Mueller on a variety of topics intended to both poke holes in the legitimacy of the special counsel's investigation and reiterate that Mueller's investigation did not establish a criminal conspiracy between Trump's team and Russia.

"This hearing is long overdue. We've had the truth for months — no American conspired to throw our elections. What we need today is to let that truth bring us confidence and closure," said Georgia Rep. Doug Collins, the top Republican on the Judiciary panel.

The President himself has said he may watch a "little bit" of the Mueller hearing, and it's always possible he -- and his Twitter account -- could respond in real-time to the special counsel. In the days leading up to the hearing, Trump has been on the phone with aides and allies, expressing irritation at having to watch the man whose investigation he has repeatedly lambasted as a "witch hunt" and a "hoax."

First up will be the Judiciary Committee, where lawmakers expect the potential for more fireworks as the committee focuses on obstruction of justice and volume two of the Mueller report.

Democrats on the committee say they plan to run through the 10 episodes of obstruction that Mueller documented in his report. They'll focus on five incidents in particular, including Trump's efforts to fire the special counsel, to convince then-Attorney General Jeff Sessions to un-recuse himself and to encourage witnesses like Paul Manafort and Roger Stone not to cooperate with the investigation.

In his investigation, Mueller said he relied on the Justice Department guidelines that a sitting President cannot be indicted. But Mueller also said that if his investigation could have cleared the President, he would have done so, but it could not exonerate Trump.

On the Intelligence Committee, which will convene in the same room after the roughly three-hour Judiciary session, the focus will shift to volume one and Russian election interference. There, Democrats will seek to walk Mueller through the numerous contacts between Trump's team and Russians, in order to establish that they were highly problematic and troubling, even if they weren't criminal.

Mueller's probe did not establish a criminal conspiracy between the Trump campaign and Russia, but it did find that Trump's team had numerous links to Russia and expected to benefit from Moscow's hacking effort.

Republicans in both committees may focus less on the report than on the team that produced it, and some of the questions that have been raised about the FBI's counterintelligence investigation into Trump's team. They're expected to press Mueller on the anti-Trump text messages sent by members of his team and the use of an opposition research dossier to obtain a foreign surveillance warrant that was paid for by Democrats.

A hearing months in the making

Mueller's testimony before Congress appeared in doubt at several points. Congressional Democrats were hopeful they would get Mueller before their committees almost as soon as he concluded his investigation -- arguing they needed Mueller to push back against what they considered Attorney General William Barr's misleading narrative about the report and his decision that the President did not commit obstruction.

At first, Democrats pushed to gain access to the full, unredacted Mueller report and underlying evidence. But after the Justice Department resisted that endeavor, they turned their sights on the special counsel.

Weeks of negotiations followed, and Democrats believed they were close to securing an agreement in May. But Mueller did not want to testify before Congress, fearing a political circus. He spoke publicly in his final week as special counsel, where he said that that he did not want to testify, telling Congress: "The report is my testimony."

But Democrats were not persuaded. They continued to publicly call for the special counsel's appearance and negotiating with Mueller. Ultimately they struck an agreement for him to appear publicly July 17 before both the Judiciary and Intelligence Committees if they issued a subpoena to compel his testimony.

That still wasn't the end of the drama over Mueller. Democrats fought with the Justice Department and the special counsel's team about whether Mueller's deputies would appear in a closed session after the special counsel. Junior members of the Judiciary Committee were furious that the arrangement would not give them time to ask questions.

And so one more twist was included in the special counsel's appearance: His testimony would be delayed one week, and he would sit for an extra hour with the Judiciary Committee to allow all members to ask questions.

The deputies interview was also canceled, but Mueller still wanted his former chief of staff, Aaron Zebley, to appear with him. Just hours before Mueller was set to appear on Tuesday, yet another shift was included in the hearing: Zebley was expected to participate in some fashion as counsel to Mueller, to the protest of Republicans over the last-minute change.

This story has been updated with additional developments and will update throughout Wednesday's hearing.