The sound of silence is common in Sunizona, Arizona.

It's a small and quiet town, nestled deep into the southwest corner of the state, about 95 miles east of Tucson and 45 miles north of Douglas. The rural town is home to around 200 people.

It's also home to a mystery, surrounding the disappearance of a mother and her young daughter. On May 23, 1993, Dorothy Pitcher and her daughter Danielle vanished, after they left their home on Ash Creek Rd. on a walk to the store.

"Nothing was different," Dawn Pitcher said about the day her sister and mom disappeared. "There was nothing different with the situation, except they never arrived back home."

On that May afternoon, the two made it to a store located at what is now the junction of Highways 181 & 191, which is a few miles from their home. From there, they were last seen on their route home on a prominent "s"-curve that runs through town.

Days turned to weeks, weeks to months, and months quickly turned to years for Dawn, as she longed to know what happened to her mom and sister.

Dorothy was 47 years old when she went missing.

"My mom was soft spoken. She never wanted to cause waves," she said.

"She was silly, she was vibrant, she had energy," Dawn said. 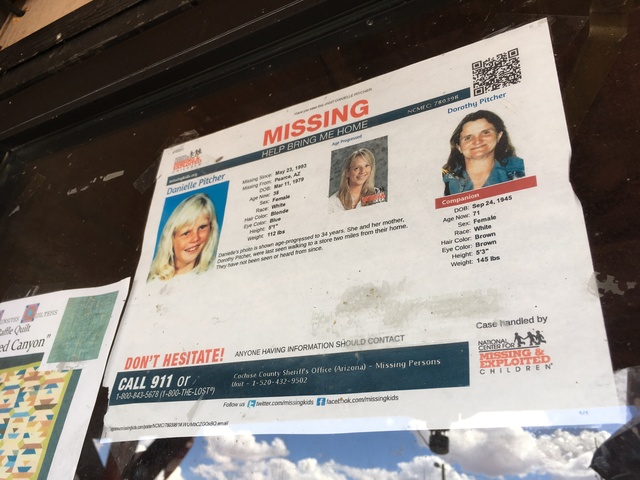 Though it's been nearly 25 years since they vanished, their missing poster still sits on the front door of a restaurant that now sits where the store was located in 1993. The case isn't closed, and after years with no leads, detectives are now following a new one, according to Dawn.

"It's looking positive," she said. "You know, you always have to keep a positive attitude, and a positive outlook. I mean, don't put all of your eggs in one basket, but at least have faith that they're following the right path."

She doesn't expect she'll ever see her mom and sister again because she doesn't think they just disappeared. Dawn believes that someone out there killed Dorothy and Danielle.

"I believe that we can find their killer," she said.

While there are still many unanswered questions that grow older as time passes by, Dawn hasn't given up hope that her family will someday get an ending to this traumatic chapter of their lives.

That is why she still has the same plea for the community: if you heard anything, know anything, saw anything, to speak up and contact authorities so she and her family can have their ending.

"Somebody might have seen something, saw something, and didn't think it mattered, but it probably does," Dawn said. "The littlest information that you might think is insignificant could be something that triggers everything in the right direction."

If you know anything that could help with the investigation, you're urged to contact the Cochise County Sheriff's Office at (520) 432-9500