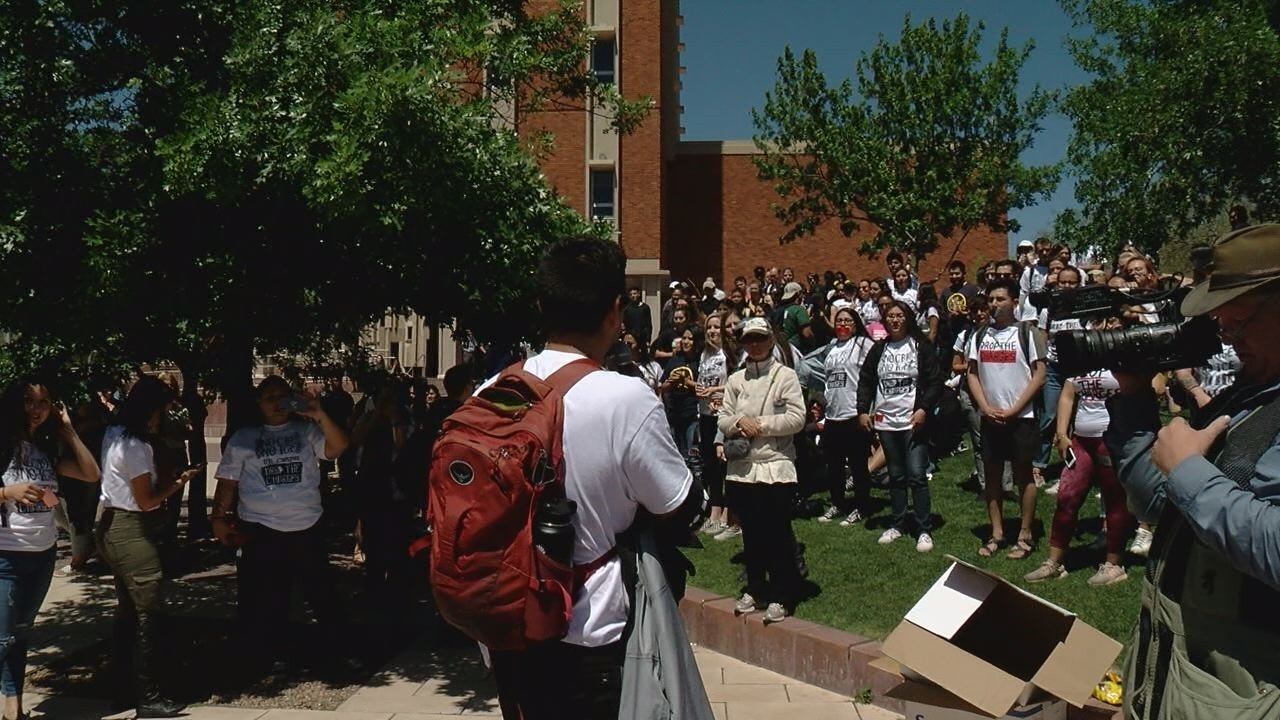 A college student is heard yelling "murder patrol" at two border agents who had been asked to give a talk about their jobs to a University of Arizona club.

The chants grow, and the agents leave before they can finish speaking. The protesters follow them to their car.

The footage sparked anger among members of the union that represents Border Patrol agents. A few days later, the university announced that two students involved in the protest, including the one who took the video, were being charged with interference with the peaceful conduct of an educational institution, a misdemeanor. A third student was later charged.

Now, faculty, immigrant rights advocates and students are mounting pressure against officials at the Tucson campus to drop the cases and stand by the three students.

They say those charged had free speech rights to protest the agents' presence and that allowing agents on campus instills fear in immigrant students.

Dozens of students protested Thursday at a Board of Regents meeting in Tucson by putting tape over their mouths. On Wednesday, more than 200 activists held a protest on campus.

Immigrant advocates say the policies of President Donald Trump - from family separations at the border to his attempt to end protections for younger immigrants brought to the country as children - have created a culture of extreme fear.

Those feelings often extend to the officers and agents in the two agencies that deal with immigration enforcement - the Border Patrol and Immigration and Customs Enforcement.

In Waynesboro, Virginia, parents complained after an ICE agent gave a presentation about his job at a middle school, saying they feared it made students uncomfortable. The agent wasn't on duty.

In Middletown, New York, the city's mayor was outraged when plainclothes ICE agents attempted to make an arrest at a courthouse, an increasingly common practice that the agency generally avoided before Trump took office.

"I do think that particularly at this political moment, people who are representing ICE on-duty or off-duty represent the Trump administration and everything that's been happening under him," said Tania Unzueta, policy director for Mijente, a national political organization.

"You have agents who are almost having to hide from the public eye and even some of their neighbors and not telling them what they do for a living," del Cueto said. "They're hard-working agents and they believe in the job that they're doing and what they do is within the law."

Mariel Alexandra Bustamante and Denisse Moreno Melchor, two of the students charged in the University of Arizona incident, said in a written statement that allowing Border Patrol agents on campus is harmful to students for several reasons, particularly because the agency they work for is "one of the main culprits for the separation of families."

"The criminalization of these communities is solidified by Border Patrol's presence on our campus," the students wrote.

The students declined to answer questions, saying an attorney advised them against speaking to reporters.