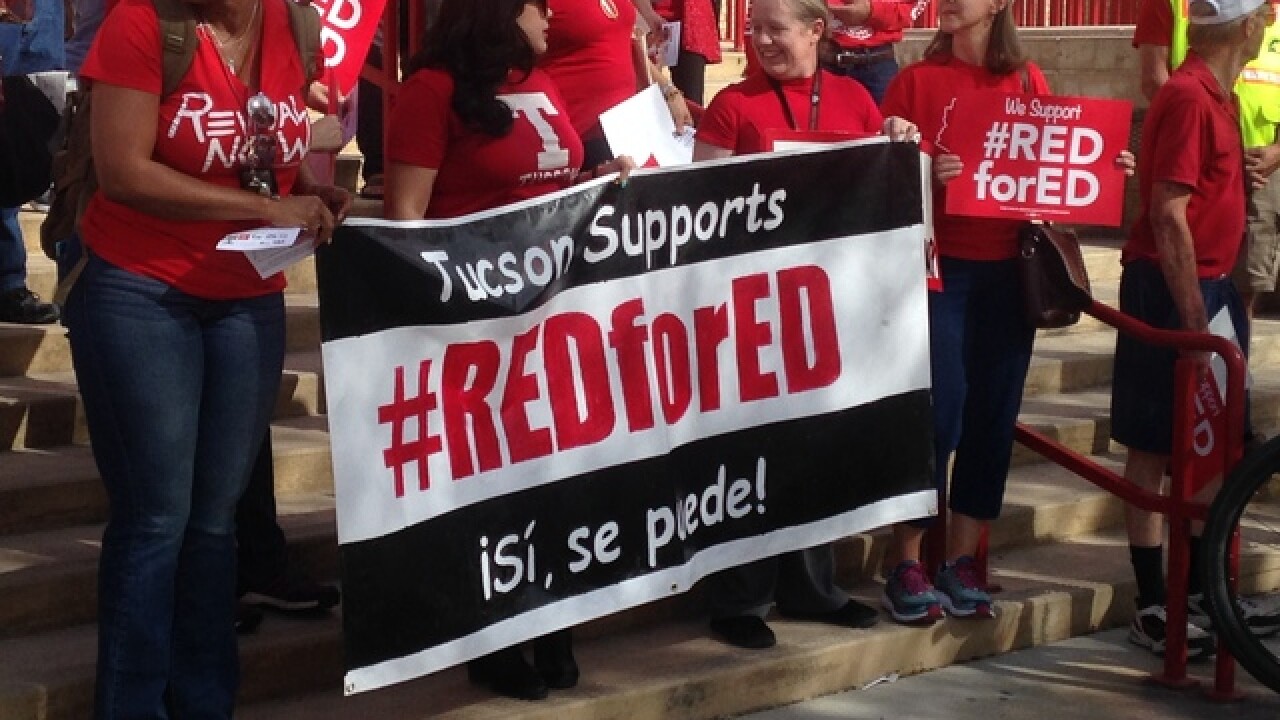 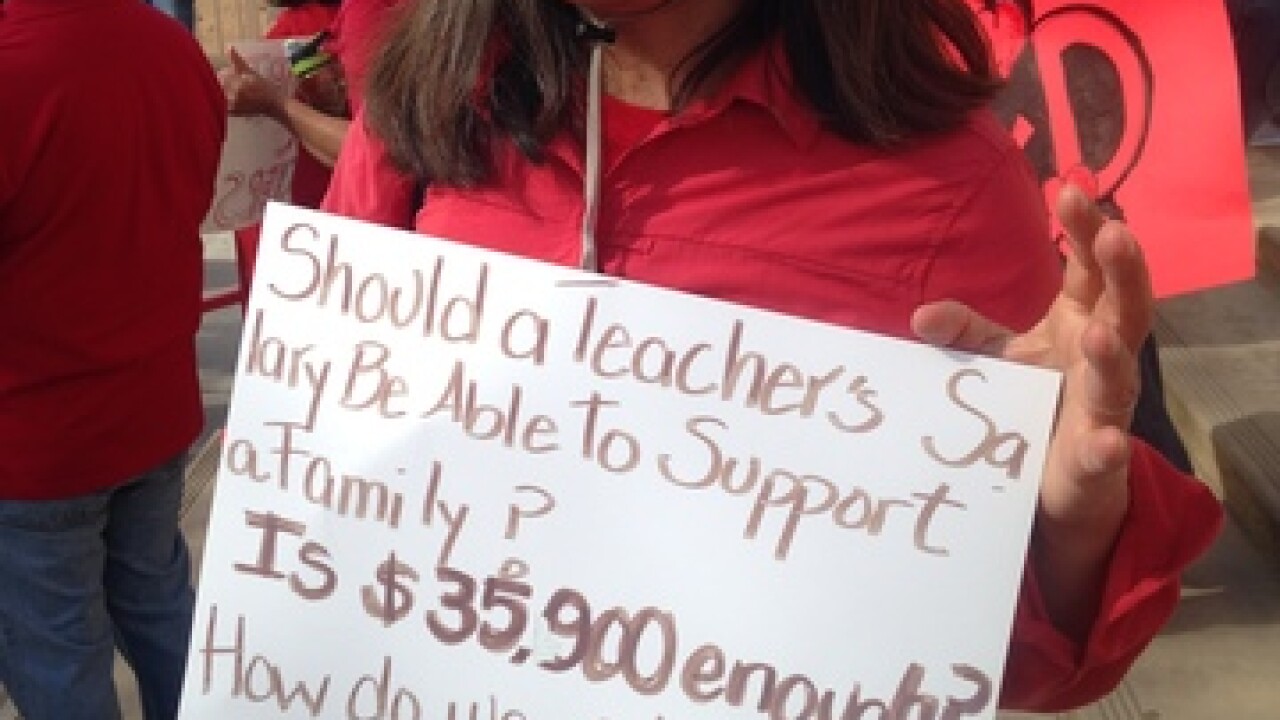 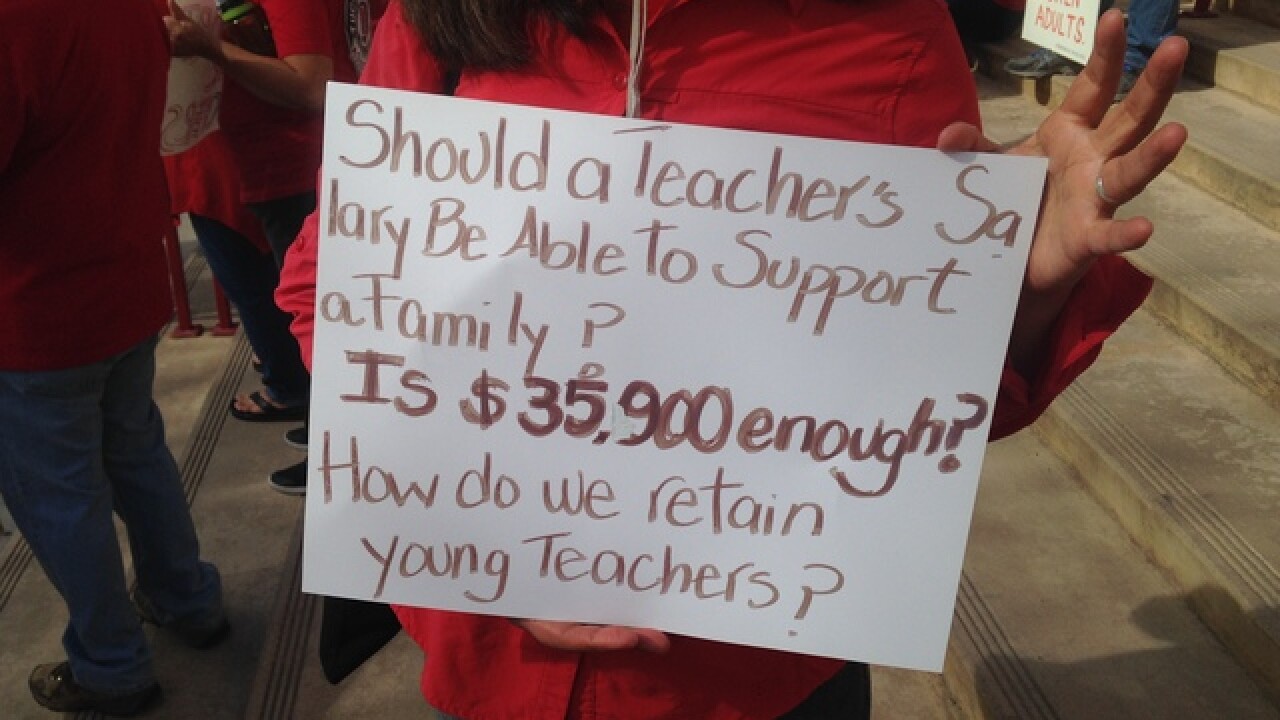 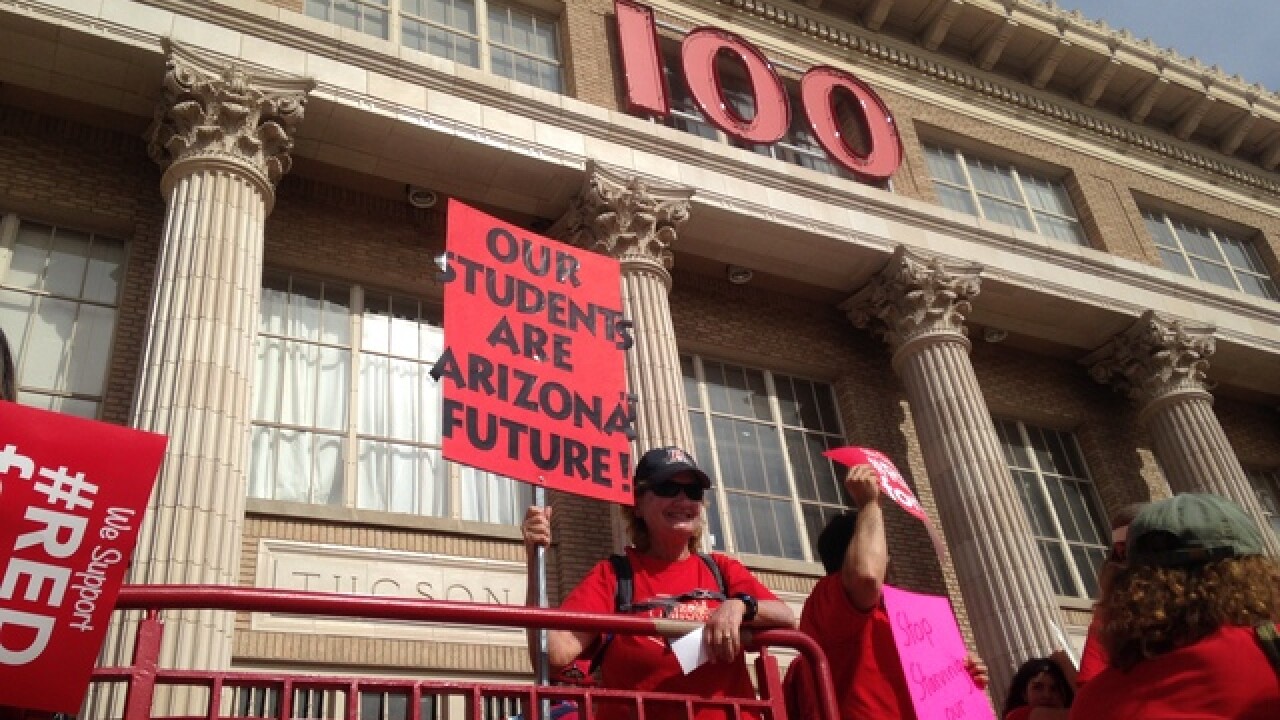 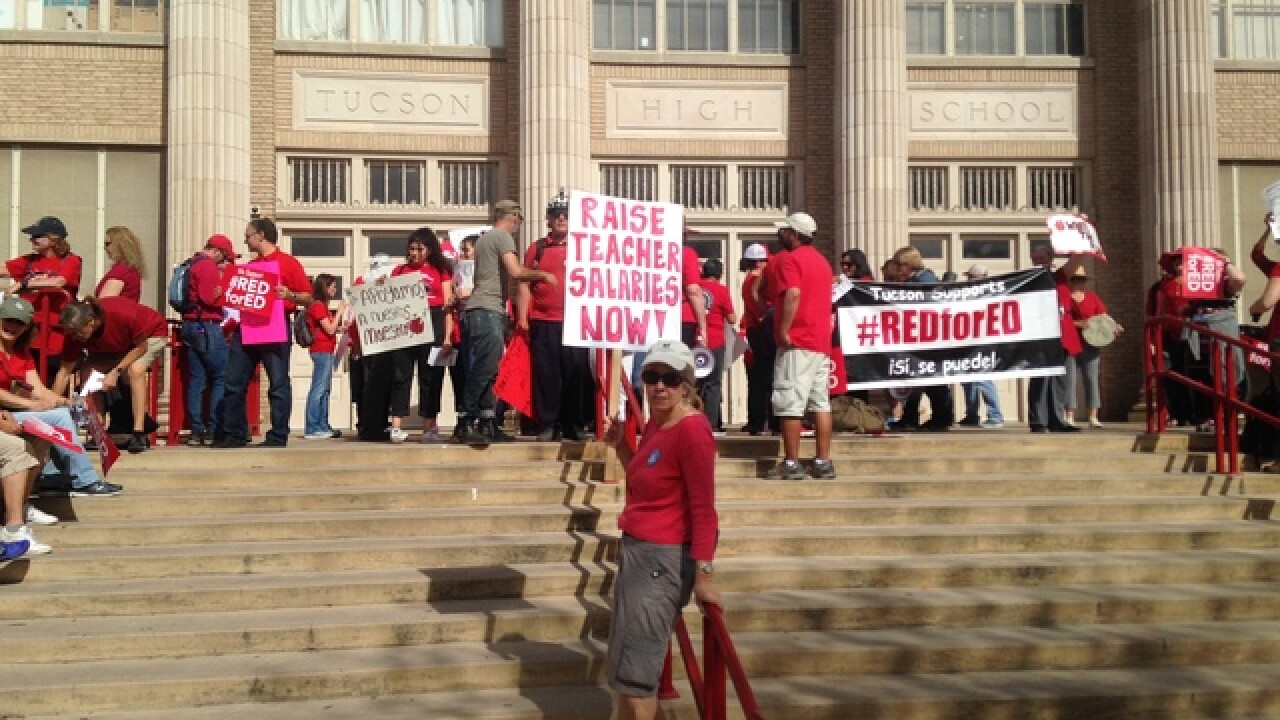 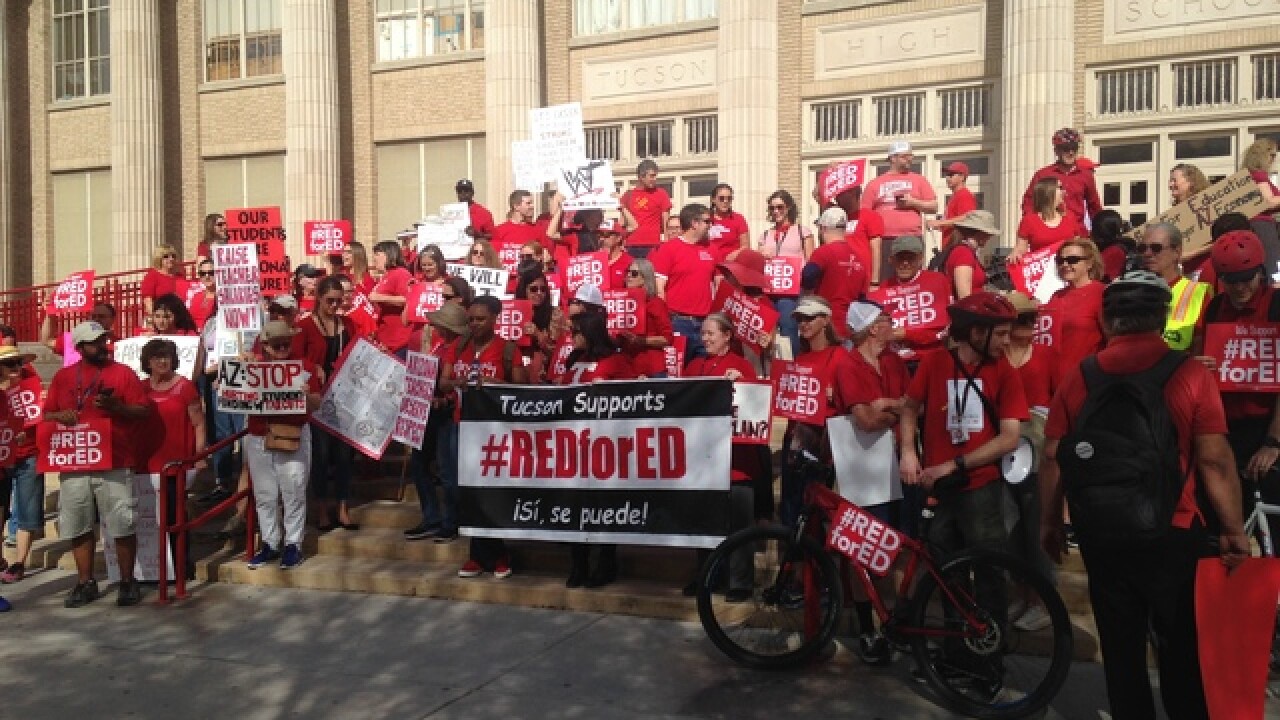 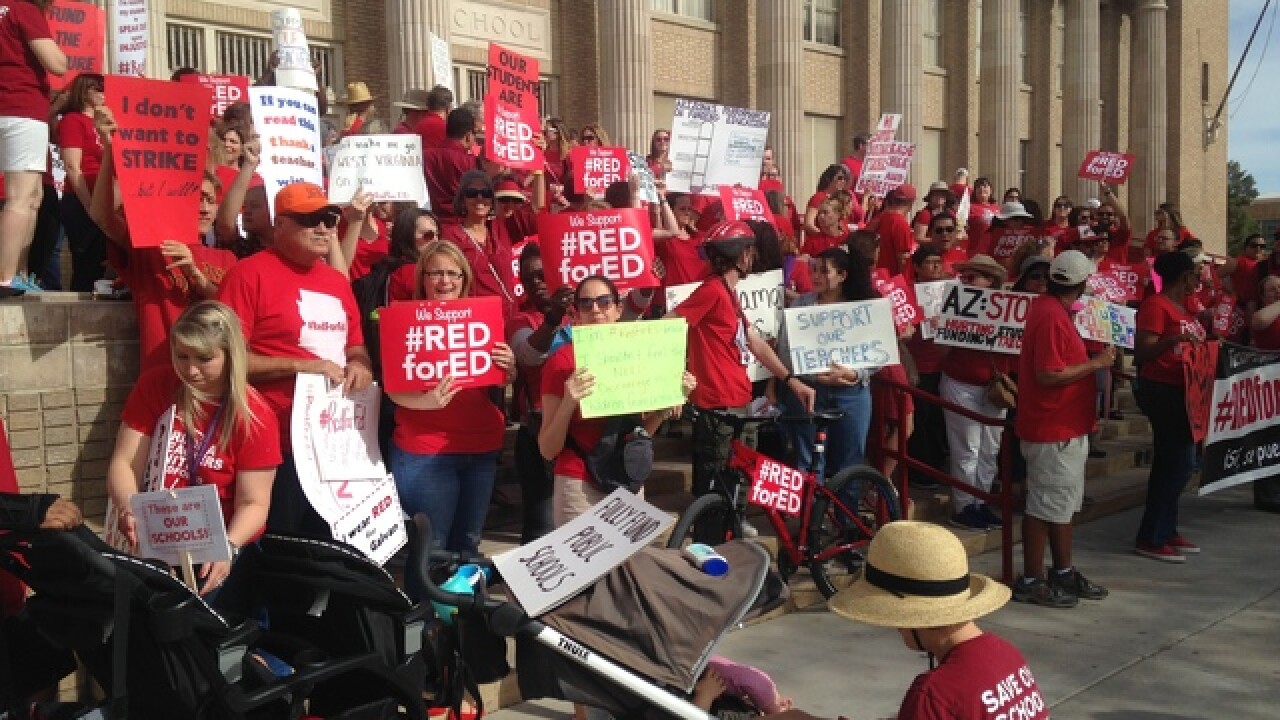 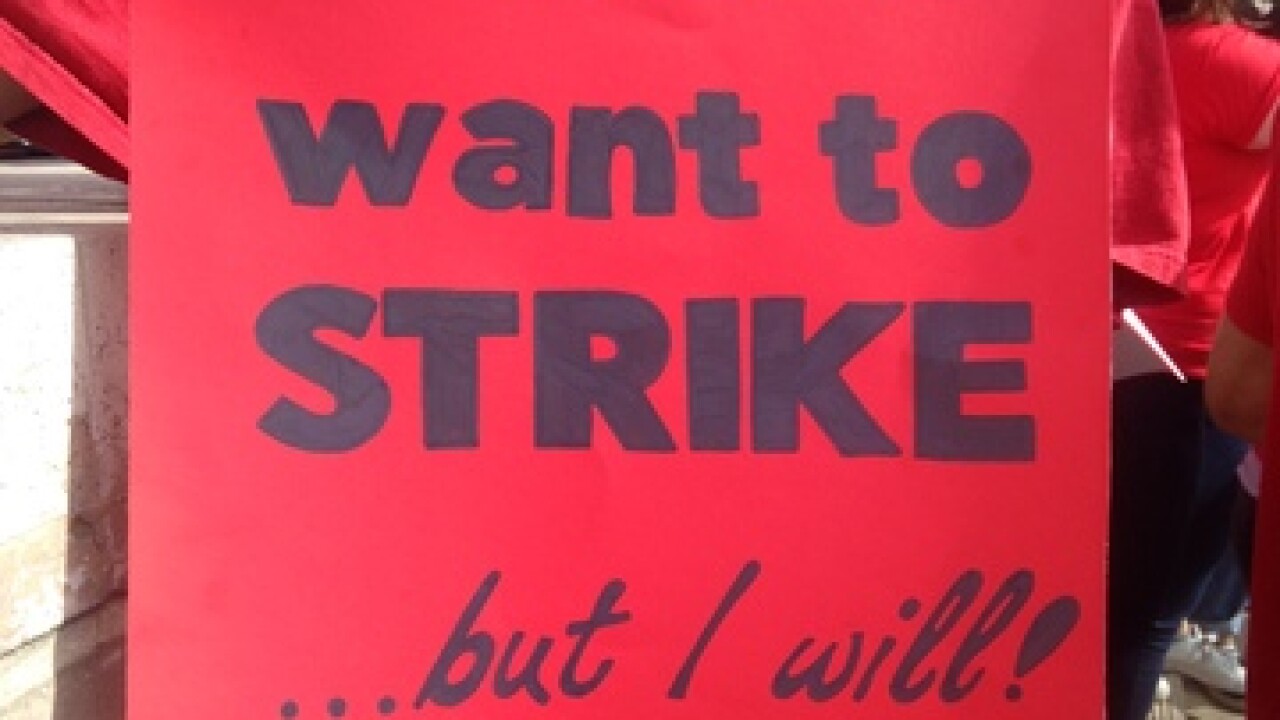 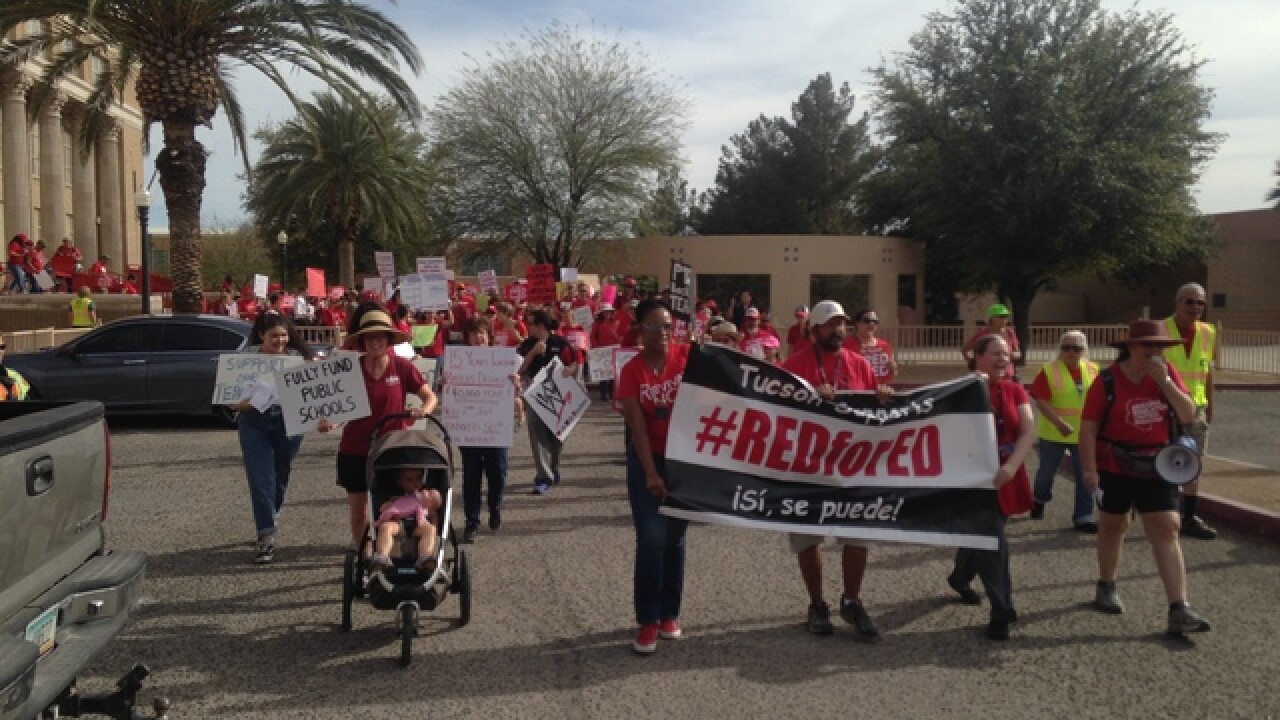 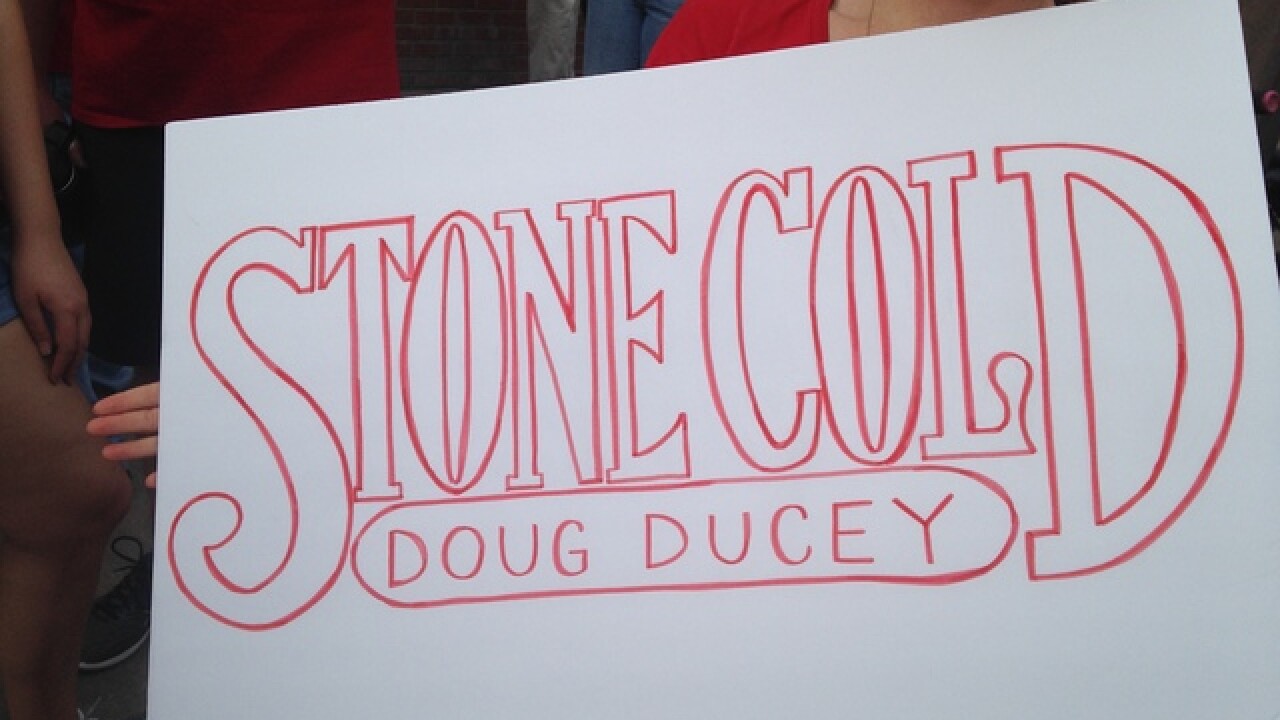 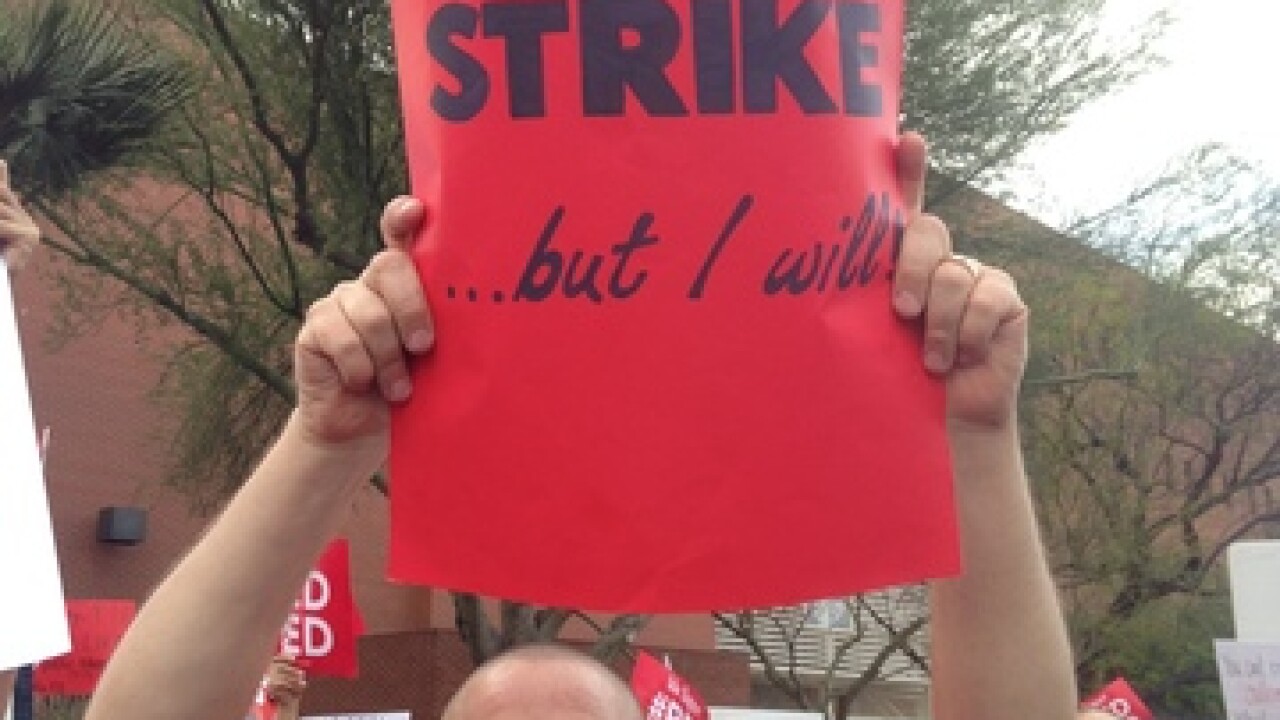 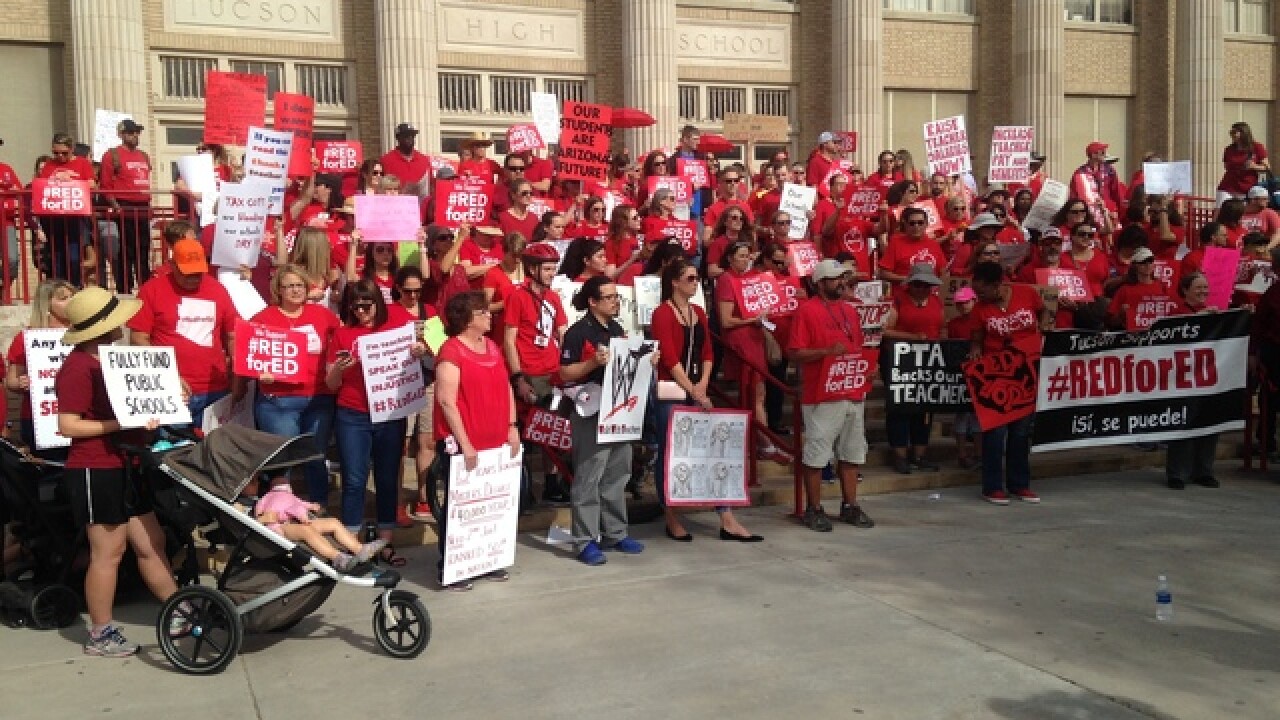 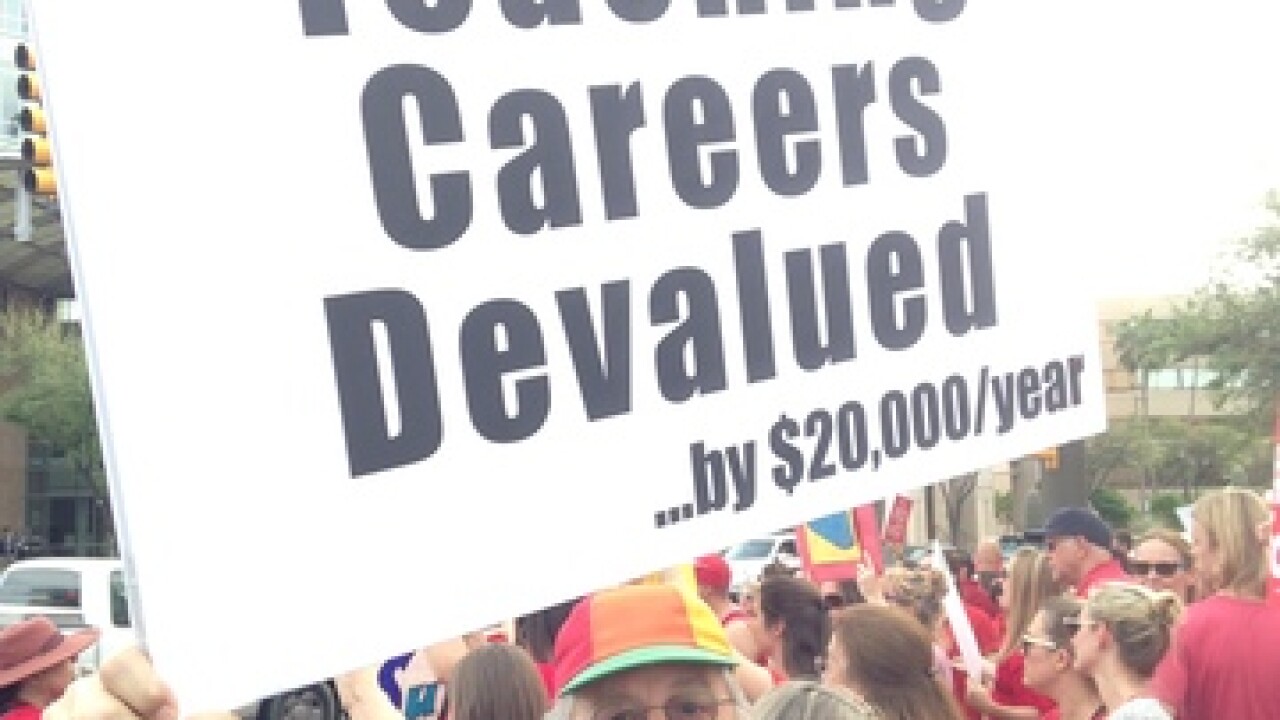 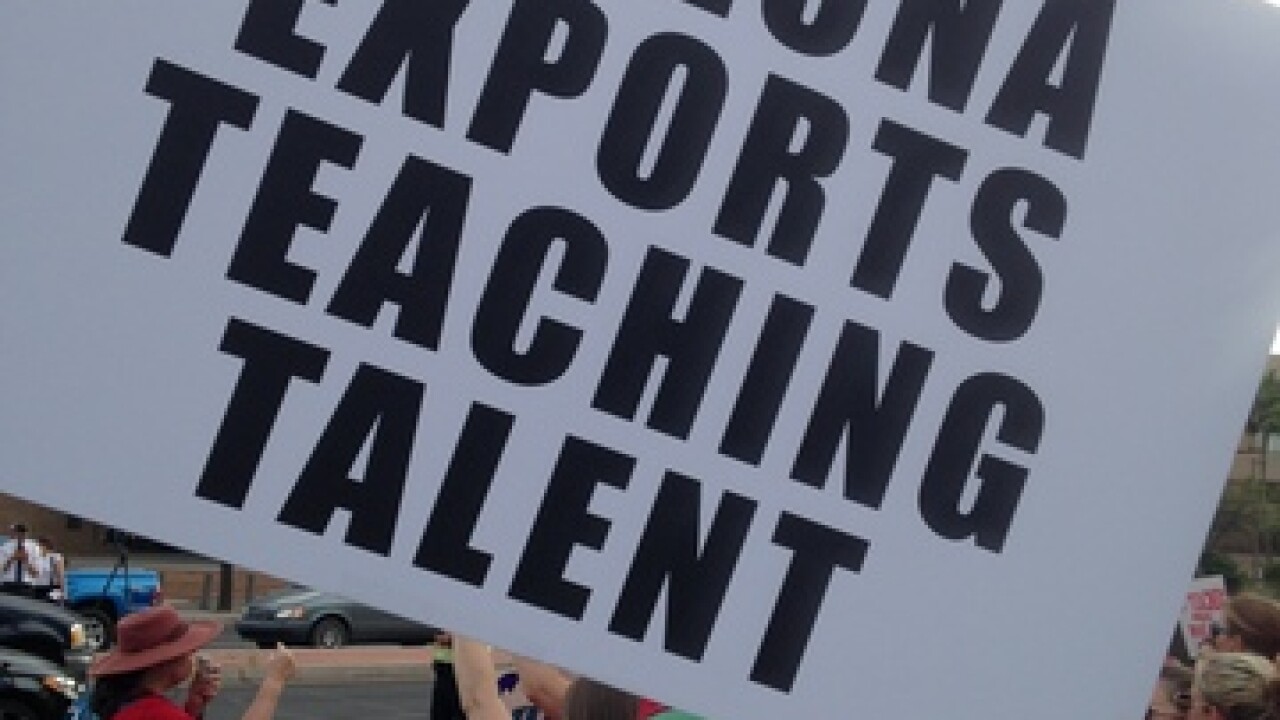 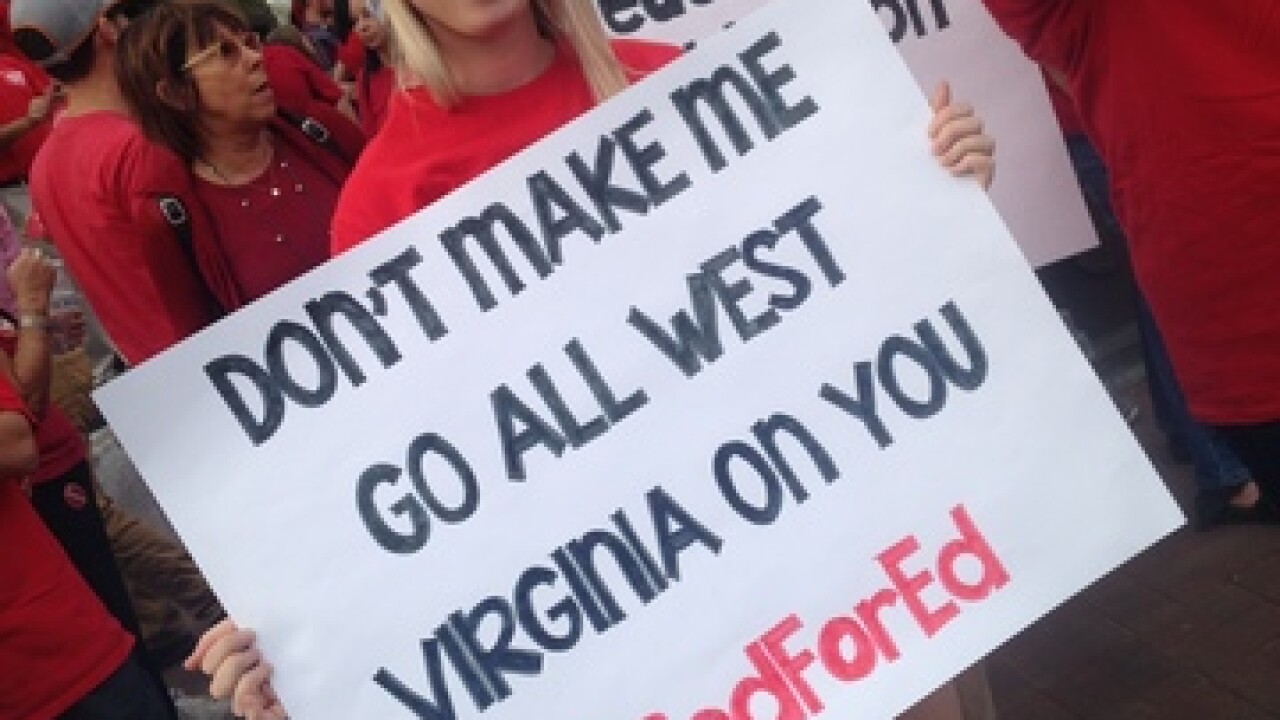 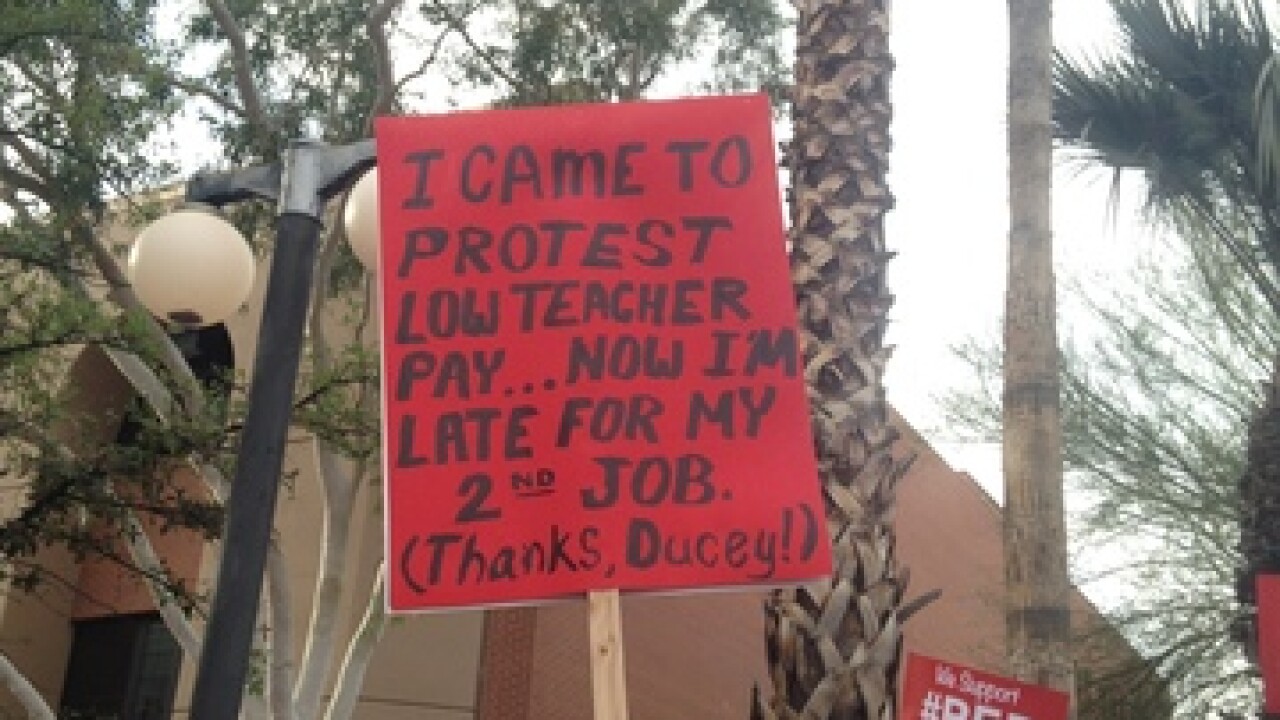 Talk of a possible strike permeated the crowd of teachers who gathered in downtown Tucson to rally for higher pay.  Hundreds of teachers and their supporters marched from Tucson High School and then rallied in front of the State of Arizona office building at the intersection of Congress and Grenada.

The march and rally were the culmination of a day that began with protests. Teachers at some schools around Tucson and elsewhere in Arizona staged “walk ins” before the school day began. They wore red, talked with parents and others about their movement to win higher pay and school funding, and then walked into the building together.  Organizers say they did not want to stage a protest that would force teachers to miss work and students to miss school.

Signs and stickers at the rally read, “I don’t want to strike, but I will.”

Kevin Dix, a school counselor, says he was a teacher for nearly two decades before becoming a counselor. He held one of the signs threatening a strike.

“I’m trying to send that message and there's a lot of support for that here. This is our only thing left, if we don't make noise they're not going to hear us,” Dix said, referring to Governor Ducey and state legislators.

While some Arizona educators have called for state-wide walkouts, especially on social media, as teachers fight for higher pay, Jason Freed, Tucson Education Association President, said he and other labor organizers are still just discussing their options but he did not expressly rule them out. A formal strike would be a drastic step for teachers and could bring serious consequences.

In the 1970's the Arizona Attorney General's Office stated that while there is not a specific law outlawing a teacher strike if one does occur it would be illegal and participants may lose their certifications.

A spokesperson for Attorney General Mark Brnovich said his office is aware of that opinion, but it has not been asked to weigh in on the issue. The spokesperson said only the legislature as a whole, or the House or Senate, a public officer of the state, or a county attorney could make such a request.

Tricia Johnson, a fifth grade teacher, brought her children to the rally. She said she believes she is fighting for her family’s future saying many of her colleagues work extra jobs.

“We need money is the bottom line. Teachers are leaving, we're exporting teachers to states that pay more,” Johnson said.

A woman next to her held a sign that read, “I shouldn’t have to marry rich.”

Following the rally organizers announced plans for more “walk ins” April 11. They hope to have enough support to stage them at 1,000 schools.