Copyright 2017 Scripps Media, Inc. All rights reserved. This material may not be published, broadcast, rewritten, or redistributed.
Darrow, Max

As the holiday season approaches, law enforcement agencies across Arizona are making a push to get drunk drivers off the road.

The span between Thanksgiving and New Years is the deadliest season for impaired driving accidents, according to Jason Frazier. He is the Executive Director of the Arizona chapter of Mothers Against Drunk Driving.

He's urging people to make a plan about how to get home safely from a party or bar, before they go out and celebrate. If someone finds themselves asking the question, "am I okay to drive home?" he says, that answer is always no. 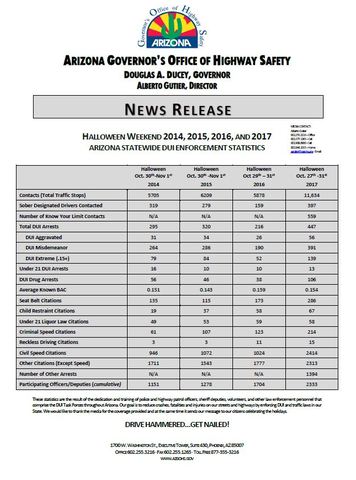 "It's really bad to see those numbers," Frazier said. "But on another hand, it's a great thing that they're out there making those stops and keeping us safe."

Moving into the holiday season, Frazier hopes to see this law enforcement crackdown on drinking and driving continue. However, he also hopes people make smart decisions and do not get behind the wheel when the have been drinking, putting their life and everyone else's lives on the road in danger.