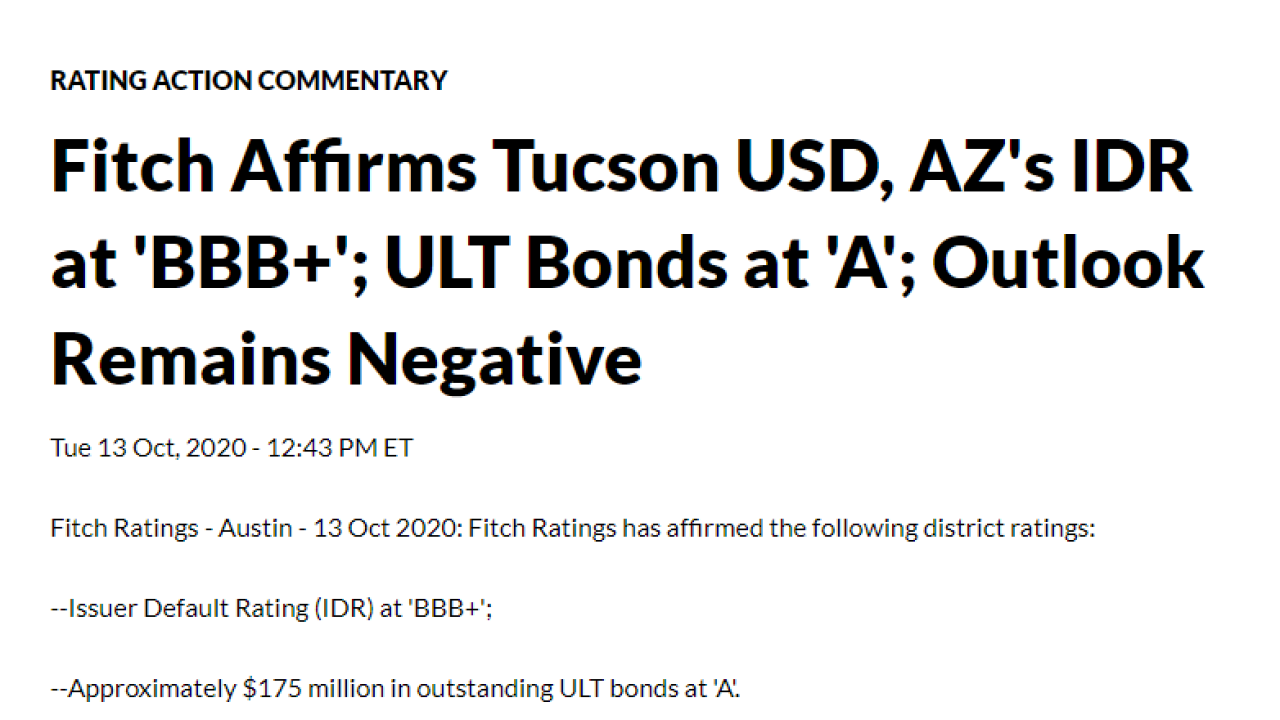 TUCSON, Ariz. — It's a race against time to put Tucson Unified's budget on better footing.

A just released report by a major bond rating firm reveals the district's outlook remains negative for a second year in a row.

And it explains why.

In a nutshell, continued declining enrollment, meaning less money coming in, coupled with the district not being disciplined enough on how it manages the budget and cash reserves weakens its chances to weather a continued financial storm.

We reached out to TUSD leadership and board members.

Superintendent Gabriel Trujillo sent us a response in a statement.

Trujillo said in part, "For fiscal year 20-21, our financial situation is stable."

He also said, "Depending on the length and severity of what remains of the pandemic, our financial situation could be even more challenging for fiscal year 20-22."

The 'BBB+' IDR rating and Negative Outlook reflect continuation of the district's weak financial resilience and current cash flow pressures that Fitch believes are likely to persist, underpinned by a declining enrollment base and weak fiscal management. Budgetary tools are limited in nature and revenue growth remains negative, weakening the prospects for meaningful restoration of reserves in the near future, particularly in light of possible future pandemic-related revenue pressures. A low long-term liability profile continues to support the 'BBB+' IDR.

“As the report released by FitchRatings acknowledges, the district’s cash situation, which directly affects this rating, has been exacerbated by the shortage of $8 million in state desegregation aid owed to Tucson Unified by the state of Arizona as a result of our recent victory in Arizona Tax Court. The judge ruled in our favor in July of 2019 and at this point, our funding shortage owed to us by the state has grown to almost $12million.

It should also be noted that as communicated in our Annual Financial Report presented at the October 6th Governing Board meeting, TUSD will be carrying over from fiscal year 2020 into fiscal year 2021, the amount of $14 million in funding that will be utilized to offset any enrollment losses triggered by the pandemic related closure of the district that began on March 16th, 2020.