Tension continues building between Nogales city officials and Border Patrol after concertina wire was installed from head to toe on the border fence. 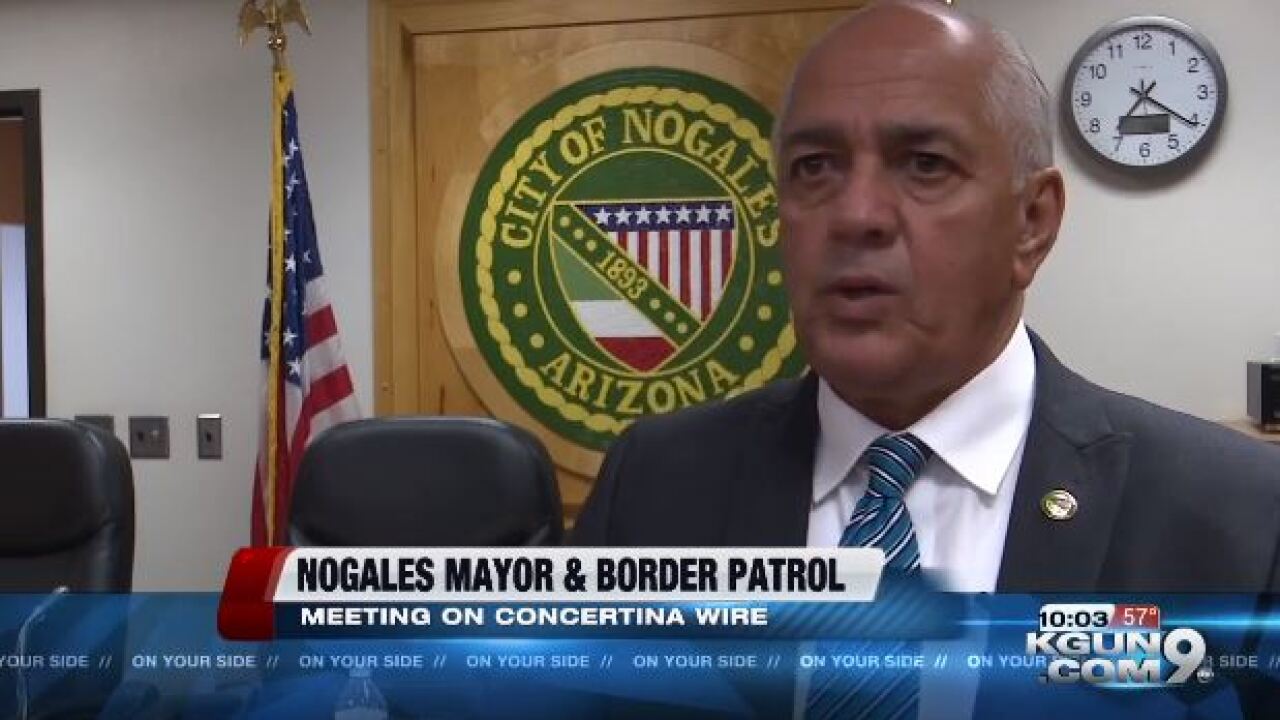 NOGALES, AZ — Tension continues building between Nogales city officials and Border Patrol after concertina wire was installed from head to toe on the border fence.

Last week, Nogales Mayor Arturo Garino said he walked out of a meeting with top Border Patrol officials after disagreements over the wire.

In the same meeting the Nogales city council unanimously approved a resolution condeming the wire and demanding it be taken down, another controversial issue arose.

Mayor Garino says he, the city manager and chief of police met with Border Patrol officials to discuss the concertina wire on the border fence.

"Why is this happening to Nogales and they said well, we were told to fortify the city of Nogales, fortify this area."

Garino says border patrol officials told him and his staff that it wasn't the military's decision to add more concertina wire.

"He says no we decided to use concertina wire and I said, who decided? You? And they said yes we asked for it."

Garino says he was socked by the reason Border Patrol gave him.

KGUN 9 reached out to border patrol, and asked them specifically about the mayor's comments. Below is their full response.

“The current DoD deployment in Tucson Sector is assisting CBP with the installation of two strands of concertina wire. Since the deployment began in November, there has been a subsequent request for additional support in high-risk urban areas commonly exploited by criminal smuggling organizations. In these concentrated areas, 4 to 6 additional strands of concertina wire are currently being installed. These locations are outside the City of Nogales Charter and on United States government property. As the situation along the border is always evolving, CBP is constantly evaluating operational needs. Currently there are no plans to remove the concertina wire. In mid-November, CBP and United States Border Patrol (USBP) leadership met with local law enforcement leaders from Santa Cruz County, to include law enforcement and first responders from Nogales to discuss this operation and the hardening of both the ports of entry (POE) and infrastructure between the POEs. Earlier today, USBP leadership met with elected officials and law enforcement from the City of Nogales to listen to concerns and explain the current concertina wire deployment and the requirements leading up to this action. It is important to note, CBP and local law enforcement have a shared mission of public safety, that begins with border security. Safety for the public and first responders is of the utmost concern, and as such, several precautionary measures have been put in place. Public safety fencing has been established in locations where there is major public access and the concertina wire is lower to the ground. Signage in Spanish and English has been put in place warning individuals of these dangers and prohibiting access. In locations where there is high pedestrian activity, the concertina wire is limited to only the upper portion of the wall. CBP is firmly committed to our overall national security mission, which includes ensuring the safety and security of the traveling public, both documented and undocumented, as well as our law enforcement officers and border communities. Hardening of current specifically in high-risk locations of the urban area help reduce the illicit activity, to include violent criminals, in these areas and increase the public safety.”